Women who were trafficked find relief at London’s Bakhita House 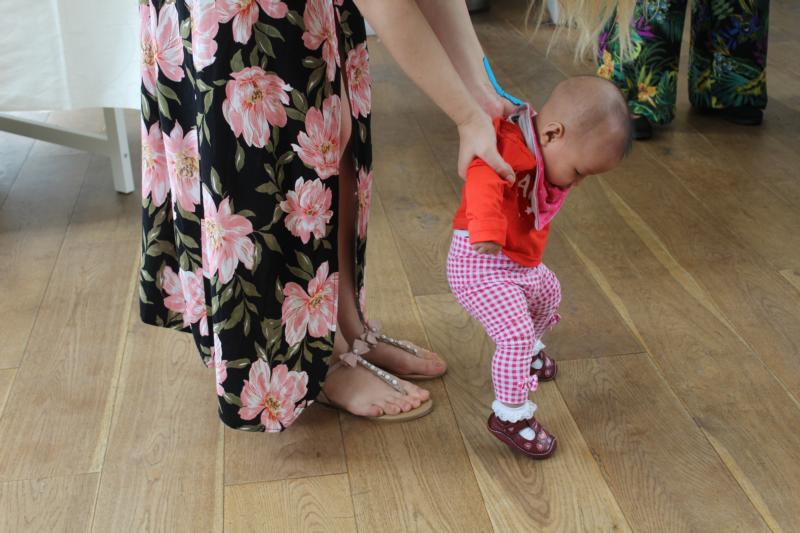 A woman holds a child at Caritas Bakhita House in London. Owned by London’s Catholic Archdiocese of Westminster and managed by Caritas Westminster, Bakhita House provides women escaping human trafficking and slavery with the safety and support to allow them to begin the recovery process. The woman’s face is not shown to conceal her identity. (CNS photo/courtesy Bakhita House)

LONDON (CNS) — Little did Rose realize that her dream of soon completing university studies and finding the love of her life on her 21st birthday would turn into an indescribable abyss.

Rose — not her real name — was studying finance and accounting in her native Albania and had just entered her first serious relationship with a man. She was looking toward a bright future.

Unknown to Rose, however, her father had arranged a marriage to a much older man, selling her for more than $2,500.

Rose escaped her predicament on the day of the scheduled marriage in June 2016, thinking she would be safe running to Italy with the man she was in love with. After a month together, however, he sold Rose to another Albanian man for $3,775. She was forced into prostitution, a situation that lasted for a year and a half. She escaped Jan. 18, 2018, in London.

Rose never saw any of the estimated $207,000 the trafficker made.

“This story can happen to anyone,” explained Karen Anstiss, service manager at Caritas Bakhita House in London, where Rose’s life was renewed and she received the healing she needed.

A ministry of the Archdiocese of Westminster and Caritas Westminster, Bakhita House provides women who have fled from their captors with safety and support and allows them to recover from their ordeal.

“The church has allowed us the time to work with women that they need. We allow that time and care to go into place, which is the main difference between us and the government system,” Anstiss told CNS at the offices of the Catholic Bishops’ Conference of England and Wales. Bakhita House’s location is kept secret for security reasons.

Rose’s story is not unusual.

The most recent Global Slavery Index estimated that 40.3 million women, men and children were subjugated to labor or sex trafficking in 2016. The figure, it said, “accounts for more lives enslaved than all of the years of the trans-Atlantic slave trade combined.”

What sets the privately funded Bakhita House apart is that it assists women for up to 13 months, much longer than the 45-day limit in British government-run shelters.

There are shared daily meals with staff, and the women take turns cooking. Staffers also provide counseling to deal with trauma, training in computer skills and personal finance, English lessons and job placement assistance. Therapeutic activities include going to a movie, visiting the beach in summer and yoga.

“I am phenomenally lucky. I have a brilliant staff and 22 different communities of sisters who volunteer within the house. They don’t wear habits and they don’t say they are sisters. We never push faith, because the best way to get faith is to come forward and find it,” explained Anstiss, who served on London’s Metropolitan Police force for 31 years and also handled abuse cases.

“We just show love, care and respect. And then they learn through that, because they wonder why people are helping them,” she said.

The house is named for St. Josephine Bakhita, a Sudanese slave who entered religious life after her release. Born in 1869, she was kidnapped at age 7 and sold into slavery. Her captors gave her the name Bakhita, which translated means “fortunate one,” before she eventually was freed.

Bakhita House celebrates its fourth anniversary June 30. Anstiss said the ministry has helped 106 women, ages 17 to 69, from about 35 countries, primarily from Romania, Albania and Nigeria.

“The trafficker will get you, hold you, remove your means of communication, income, identity,” he said. “You are told when to sleep. You have no power. You may be in a new country or a new part of the country where you have no links, communication, or know what’s going on. The only contact you have is with the trafficker.”

Anstiss said someone who is trafficked is “not always locked up or chained, but the control is over their mind.” Traffickers use fear to force cooperation, convincing victims that the police won’t help and are as corrupt as they are in their home countries. If a trafficked person does seek help, they are told their families will be killed.

Most of the women at Bakhita House have emerged from sexual exploitation; however, others were in forced labor. One of those is Maria, not her real name, who was enslaved for 46 years.

“She was found under a table, that was her bed,” Anstiss said. “She developed curvature of the spine. She still loves the family that had her because she brought them up. Although she spoke to the police about them, she would not prosecute. She doesn’t understand that they have taken her whole life, and that can’t be given back.”

Today, Maria considers the Bakhita House staff her family because she keeps returning to visit. Other women feel likewise.

Anstiss and Duthie said traffickers find it more profitable to sell humans than running drugs or smuggling guns because a person can be sold multiple times.

“We network as much as we can to put people back on their feet, if their trauma levels allow for it,” Anstiss said. It could mean work at a British Oxfam shop, at the Co-op grocery story or the new Caritas-run social enterprise. “You need to give them back control, even with choosing their clothing.”

Anstiss said if women choose to return home, police offer assistance and cooperate, when possible, with charities in their home countries. She said she is unaware of any women who have returned to an abusive situation.

“We don’t control,” she said. “If someone wants to go home, we wouldn’t stop her. We can only advise and pray a lot.”