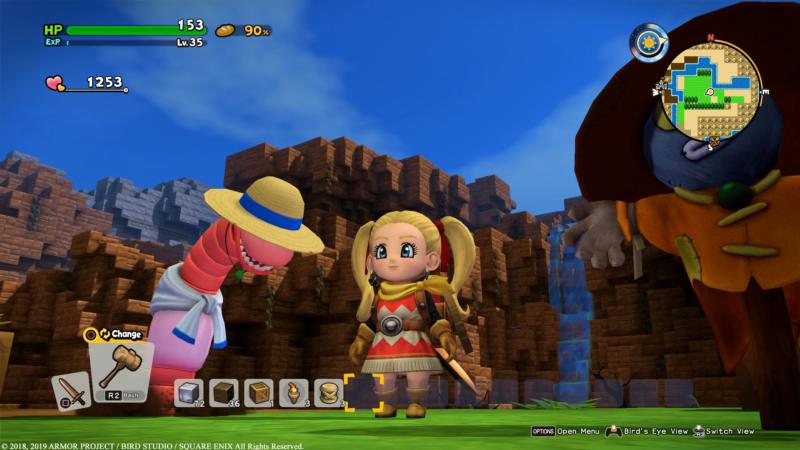 This is a scene from the video game “Dragon Quest Builders 2.” (CNS photo/Square Enix)

NEW YORK (CNS) — A classic role-playing game — RPG in gamer jargon — meets creative construction in “Dragon Quest Builders 2.” Anyone with a love for fantasy and for the blocky-building style of “Minecraft” is sure to enjoy this release from Square Enix.

Players will relish flying through the skies or diving under the water, rebuilding abandoned towns and restoring farmlands — all while putting an end to a devious cult that seeks to outlaw building.

Gameplay is set 100 years after the action of the 2016 original. An evil, destructive group called the Children of Hargon controls the land. They’ve managed to ban builders.

The player’s character, an apprentice construction worker, washes up on the shore of the Isle of Awakening after a shipwreck. Another castaway is on the beach as well, a boy named Malroth who has a penchant for destructive solutions, and no memory of his past life. Malroth helps gamers strengthen their abilities on a variety of missions.

Eventually, the protagonist encounters other people on different islands and must work together with these non-playable characters — or, in gamer shorthand, NPCs. Each island represents a unique biome, which makes for varied experiences. The Isle of Awakening functions as the main hub.

Along with the other friendships that can be developed, the player’s bond with Malroth demonstrates that great things can be accomplished through cooperation and within a supportive community. The NPCs are upbeat and positive in every encounter and universally determined to do the right thing. As the story progresses, gamers see that even villains can change for the better, given the right circumstances and opportunities.

“Dragon Quest Builders 2” does an exceptional job with such definitive elements of the RPG genre as managing armor and weapons, crafting magical items, exploring dungeons and fighting boss battles. Not content to produce just another variation on “Minecraft,” Square Enix has crafted a proper RPG experience with an engaging story progression.

Combat violence is minimal and viewed from a top-down perspective, with enemies dissipating upon defeat. Fighting is done in real time, with very basic hack-and-slash commands. The mechanics of this can be clunky compared to bigger titles, but that doesn’t significantly diminish gamers’ enjoyment.

While there’s no spoken dialogue, a few mature terms are visible in the text boxes. As for the magical aspects of the game, they’re drawn more from traditional fantasy than the occult.

With its emphasis on the value of teamwork and the potential for evildoers to achieve redemption, “Dragon Quest Builders 2” will reinforce positive values in teen players and their elders. Some parents may consider it acceptable for younger gamers as well — the elements listed below notwithstanding.

Playable on PlayStation 4 and Nintendo Switch.

The game contains stylized fantasy combat with some cartoonish bloodshed effects, a few mild oaths and references to alcohol use. The Catholic News Service classification is A-II — adults and adolescents. The Entertainment Software Rating Board rating is E10+ — everyone 10 and older.