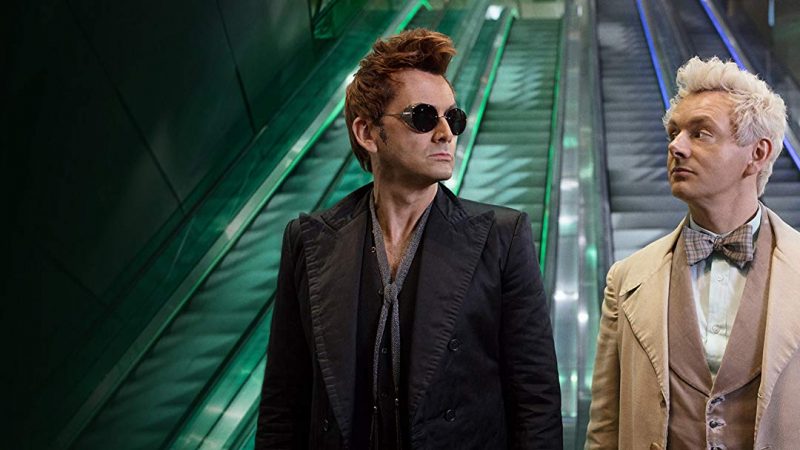 NEW YORK (CNS) — Amazon Prime customers will have noticed that an ad for “Good Omens” has recently accompanied every package delivered to them. Is the streaming service’s considerable investment in this fantasy show justified? A qualified yes is the answer.

The whimsical, broadly satiric limited series airs in six one-hour episodes. The script is adapted by British fantasy writer Neil Gaiman from his popular 1990 novel, co-written with his late fellow countryman and colleague in the genre, Terry Pratchett (1948–2015).

Academy Award-winning actress Frances McDormand (“Fargo”) provides the voice of God, who narrates the tale with an air of detachment. The angel Aziraphale (Michael Sheen) and demon Crowley (David Tennant) are the drama’s central characters.

Portrayed as the fiend who assumed a snake’s form in the Garden of Eden to seduce Eve and Adam to sin, Crowley — as Tennant plays him — comes across as a hip but dissolute rocker from the 1980s. With his working-class British accent, Crowley favors such phrases as, “your lot.”

Fussy, nervous, and uptight, Sheen’s Aziraphale is, conversely, an upper-class dandy who prefers life’s more rarefied and civilized pleasures, like fine wine. Their proximity at historic events, which they have each tried to influence, has turned these ancient rivals into friends.

Having become overly attached to Earth, both fulfill their respective roles only reluctantly. When Crowley discovers the antichrist will soon be born, setting in motion Armageddon — the final battle between good and evil — he enlists his counterpart to aid him in preventing the cataclysm since it would put an end to the unlikely pair’s enjoyment of terrestrial delights.

There’s one significant glitch, however: Crowley has lost track of the wicked one.

In the convent of a “chattering order” of satanic nuns, babies are switched at birth. So the aptly named Warlock (Samson Marraccino), son of American diplomat Thaddeus Dowling (Nick Offerman) and his wife, Harriet (Jill Winternitz), may be the diabolical child for whom Crowley is searching.

But we’re also introduced to Arthur (Daniel Mays) and Deidre (Sian Brooke) Young. Residents of the countryside village of Tadfield, they’re in far more modest circumstances than the Dowlings. They’re also the parents of Adam (Sam Taylor Buck), a thoughtful, imaginative 11-year-old who may, nonetheless, turn out to be evil incarnate.

In keeping with the narrative’s freewheeling tone, the Four Horsemen of the Apocalypse have been translated into a motorcycle gang: War (Mireille Enos, “The Killing”), Death (Brian Cox), Famine (Yusuf Gatewood) and, supplanting pestilence, Pollution (Lourdes Faberes).

Like Aziraphale and Crowley, Anathema Device (Adria Arjona) — a descendant of Agnes Nutter (Josie Lawrence), whose “nice and accurate prophecies” back in the 17th century predicted the impending calamity — has a vested interest in averting Armageddon.

To do so, she enlists the help of an unlikely ally: Newton Pulsifer (Jack Whitehall) whose ancestor, Thou-Shalt-Not-Commit-Adultery Pulsifer (also Whitehall), burned Agnes at the stake because she was presumed to be a witch. (The inventory of outlandish names is, of course, more than a hint that the proceedings are being presented with tongue firmly in cheek.)

Some have complained that the program is sacrilegious because, among things, it makes light of evil and suggests that God is a woman. But the show is really just good-hearted, impudent fun — a metaphysical romp to which only the easily offended are likely to take exception.

Adults secure in their faith should have no problem with “Good Omens.” And at least some parents may consider it acceptable for mature, well-catechized teens as well.

Sheen and Tennant have excellent chemistry, making the affection that arises between their characters — perhaps begrudgingly and despite their opposing natures — thoroughly believable. Although the duo remains appealing throughout, however, the scenes emphasizing their unusual dynamic begin to feel repetitive.

“Good Omens” does contain some laugh-out-loud moments, including Agnes’ prophecies. With an eye on technology’s far-off future, for instance, she predicts: “an Apple will arise no man can eat.” She also has some sagacious advice for 20th-century art collectors, warning them: “in 1972, don’t buy Peter Max.”

Yet, despite getting off to a strong start, the series fails to sustain itself, eventually leaving viewers waiting too long between laughs. It ends with more of a whimper than a bang and might have worked better as a feature film.

Despite its unevenness, when it works well, “Good Omens” represents a refreshingly witty departure from the tedium and predictability of so many run-of-the-mill television productions.

NEXT: Players of ‘Dragon Quest Builders 2’ build in a world where it’s banned