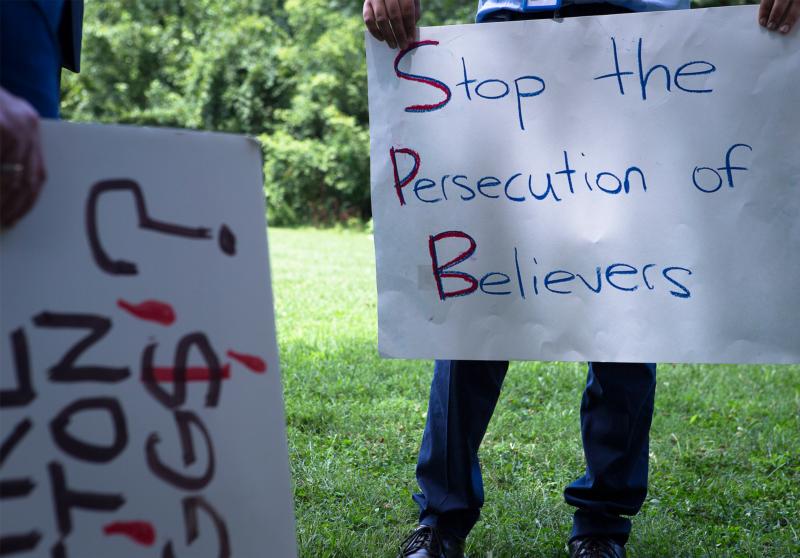 A participant holds a sign at a Religious Freedom Rally in Washington July 10, 2019. It was one of several rallies held the same day in cities around the country and sponsored by Save the Persecuted Christians. (CNS photo/Tyler Orsburn)

WASHINGTON (CNS) — The rabbi of a Pittsburgh Jewish community where 11 people were killed by a gunman in October told a worldwide meeting of religious freedom activists that only by rejecting racism and bigotry can violence in the name of religion be overcome.

“More of humanity desires to live at peace,” Rabbi Jeffry Myers of the Tree of Life Congregation, where the mass shooting occurred, said July 16, the first day of the second Ministerial to Advance Religious Freedom at the U.S. Department of State.

“We all want the same things: A roof over head, food on the table a good job, quality health care, a safe place to worship, a good education,” he said. “All of humanity are more alike than we are different.”

The synagogue shooting during Saturday morning worship has led people to question their faith in God, he said. “How do you restored one’s faith in God, which is not instantaneous, but evolves over the life on an individual?” he said.

In addition, Rabbi Myers expressed concern over the “severe” language across American society that fuels anger and hatred toward immigrants and religious minorities. He said there is no place in American society for such language.

He also blamed the media for giving more attention to violence than the far more numerous acts of good by average people and challenged media professionals to focus on good news more often.

Rabbi Myers’ presentation was one of three that opened the ministerial, made up of a series of events held over several days at the Department of State. The main event was supplemented by side meetings on Capitol Hill, at universities and at nongovernmental organizations to discuss strategies related to protecting religious freedom.

Maronite Bishop Gregory J. Mansour of Brooklyn, New York, who chairs Catholic Relief Services’ board of directors, was among a broad contingent of Catholic Church leaders attending the ministerial. He said the event allowed people to come together to learn from each other.

Officially opening the gathering, U.S. Secretary of State Mike Pompeo welcomed more than 1,000 participants from 100 countries, saying that the event was designed to open a global discussion on guaranteeing religious freedom.

“Despite our many differences, everyone here agrees on the need for religious pluralism,” Pompeo said. “We all agree that fighting so that each person is free to believe, free to assemble and to teach the tenets of his or her own faith is not optional. Indeed, it is a moral imperative that this be permitted.

“All people from every place on the globe must be permitted to practice their faith openly, in their homes, in their places of worship, in the public square, and believe what they want to believe,” he added.

Sam Brownback, U.S. ambassador-at-large for international religious freedom, echoed the call, urging the attendees to start what he called religious freedom roundtables in their local communities. Such groups would bring together people of faith, nongovernmental organizations and political leaders to discuss how to expand understanding of religious freedom.

He described the ministerial as the largest such gathering ever held to address religious freedom.

Citing the Universal Declaration of Human Rights, Brownback said religious freedom is too often overlooked by governments. The free practice of religion can lead to a prosperous world, he said.

“But the situation is grim. Although most of the world is religious, 80% of the world’s population lives in a religiously restricted place. It’s time to bring down these religious restrictions so that the iron curtain of religious persecution can come down for one and all and it comes down now,” said Brownback, a one-time Methodist who became Catholic and is a longtime political promoter of religious freedom.

Farid Ahmed, whose wife was killed during Friday prayer in Christchurch, opened his presentation with sung prayer, which included a reminder that all people are descendants of Adam and Eve, making them brothers and sisters.

As such, he said, God requires people to love and respect each other as family.

Hate, he continued, “destroys us.”

“The one who has hate is like a volcano. It is filled with rage and fury. It is burning within and it is trying to burn the outside. The hate destroys us. It destroys our trust and it costs us huge. The hate cost 51 lives in March,” Ahmed said.

Yamini Ravindran, legal and advocacy coordinator of the National Christian Evangelical Alliance of Sri Lanka, called on governments and church representatives to work together to promote understanding in the hope of preventing bombings like the ones on two Catholic churches, an evangelical church and two hotels that claimed 251 lives at Easter.

She described the effect of the violence on a 6-year-old girl who was left blind by the blast. Her parents died, however, and the girl still does not fully realize what has happened, Ravindran said.

“She does not know that she may never see again. She keeps asking, ‘Why is it so dark?'” the legal advocate said.

NEXT: Report gives snapshot of efforts to protect religious freedom around globe