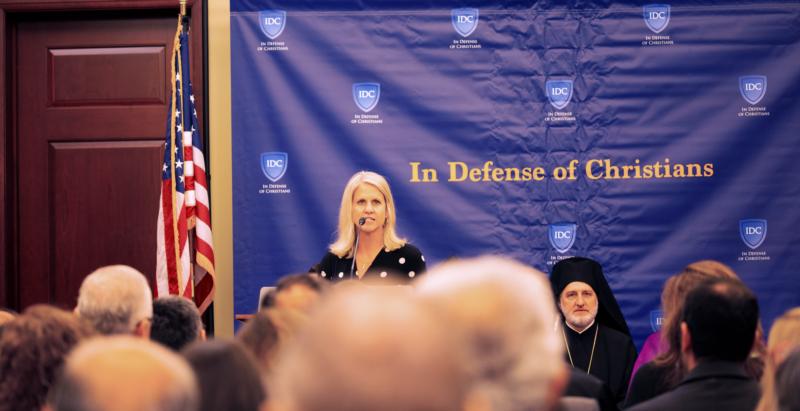 Tonia Khouri, vice president of the In Defense of Christians’ board of directors, addresses guests at the In Defense of Christians Ecumenical Prayer Service July 15, 2019, in Washington. The prayer service was the opening of the second annual Ministerial to Advance Religious Freedom, taking place July 16-18, 2019, and will convene government officials, representatives of international organizations, faith leaders, rights advocates and members of civil-society organizations from around the world to discuss challenges to religious freedom. (CNS photo/Sydney Clark)

WASHINGTON (CNS) — In the U.S. Capitol, between the House of Representatives and the Senate, members of Congress, priests, lobbyists, preachers, lay advocates and archbishops gathered together to pray July 15.

They wove together a service of psalms and prayers from the Greek Orthodox, Eastern Orthodox, and the Armenian and Syriac Orthodox traditions, all centered around the shared Gospel, symbolizing both Christian unity and U.S. government support to combat Christian persecution.

On the eve of the first official day of Secretary of State Mike Pompeo’s Ministerial on Religious Freedom, In Defense of Christians, a nonprofit, nonpartisan organization advocating for Christians in the Middle East, organized this prayer service to specifically emphasize Christian persecution.

Founder and president of In Defense of Christians, Toufic Baaklini, said in an interview that Christians are the most persecuted religious group in the world, with 70% of all religious persecutions involving Christians.

“There are genocides happening all over the world, including in Nigeria. There are many genocide victims that no one hears about,” Baaklini told Catholic News Service. “Muslim neighbors are burning homes of Christians in Egypt and you don’t hear much about that in the media either. We need to have more coverage in the media to show the cases that persecuted Christians go through.”

The focus of this event, according to Peter Burns, government relations director at In Defense of Christians, was to highlight that the ongoing battle for religious freedom in the Middle East is severe, and that some Christians even face extinction. He listed Egypt, Iraq, Lebanon and Turkey as countries in which Christians face extreme violence and persecution.

This sidebar to the Ministerial on Religious Freedom drew members of Congress, representatives of a whole spread of Eastern churches as well as Protestant church leaders, and the local diaspora community from Middle Eastern churches eager to band together in global Christian support.

The service was as much to gather Christian groups together in solidarity as it was a prayer to Congress and other American leaders to recognize and respond to the suffering Christians face in the Middle East.

California Rep. Anna Eshoo, herself of Assyrian and Armenian heritage, called on the U.S. government to continue aid for Middle Eastern Christians.

“One of the great values of country is freedom of religion,” Eshoo said. “Our framers placed that in our Constitution and I believe that that does not stop at the shores of the United States of America. We need to be the ambassadors of that value around the world. The case for Christians is a case that more people need to know about and embrace.”

Both Baaklini and Eshoo referenced the progress the U.S. has made over the past six years, beginning with officially recognizing the Christian genocides in Iraq and Syria 2016, and sending almost $300 million in aid to those countries as a response. This is only the third time that the U.S. has officially declared a persecution situation to be a genocide.

Baaklini also said that the Trump administration “is helping a lot more than in the past,” citing the president’s continued action with the Iraq and Syria Genocide Relief and Accountability Act of 2018, which provides humanitarian relief to victims of genocide perpetrated by the Islamic State.

“To be treated equally, that’s all that we are asking,” Baaklini said. “Equally.”