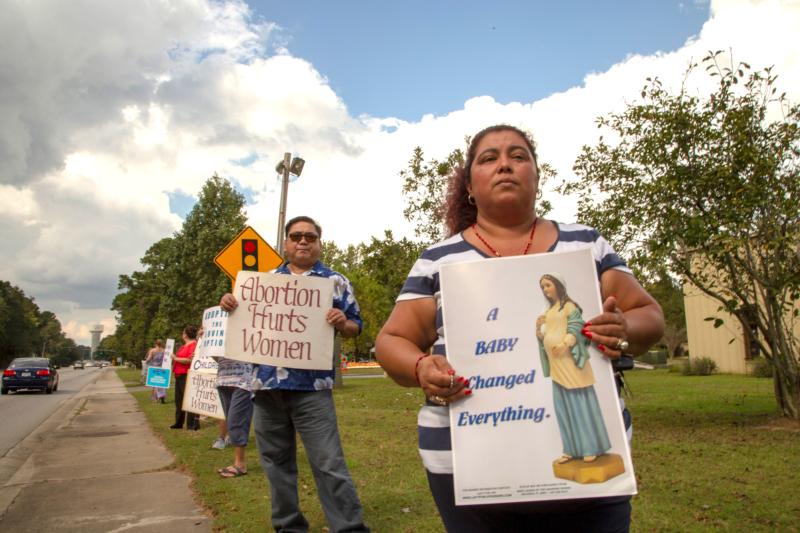 Edith Smith holds a sign while praying with a finger rosary during a Life Chain event in front of Immaculate Conception Church in Goose Creek, S.C., Oct. 7, 2018. The number of abortions occurring annually in South Carolina continues to fall, a trend welcomed by advocates who credit pro-life legislation and increased public awareness for the decline. (CNS photo/Deirdre C. Mays, Catholic Miscellany)

COLUMBIA, S.C. (CNS) — The number of abortions occurring annually in South Carolina continues to fall, a trend welcomed by advocates who credit pro-life legislation and increased public awareness for the decline.

According to a report released in late June by the South Carolina Department of Health and Environmental Control, 466 fewer abortions occurred in the state in 2018 compared to the number in 2017. This was the lowest number of abortions since 1975, according to the state health agency’s statistics.

During 2018, 4,646 abortions were reported by the state’s three existing clinics as well as hospitals. The number peaked in 1988 when 14,133 abortions were performed.

“We’re seeing an increase in engagement by the public when it comes to abortion,” Gatling said. “They get involved when they receive the correct information about the extreme nature of laws like the one passed recently in New York, and other laws around the nation that basically allow abortion at any time for any reason.”

In January, New York passed legislation that expanded access to late-term abortions and removed related criminal penalties. It is one of several states that have passed similar laws.

On the flip side, South Carolina is among more than a dozen states that have passed legislation or have bills pending that restrict access to abortion. In April, the state House of Representatives passed H. 3020, dubbed the “Heartbeat Bill” by supporters. The measure makes it illegal for an abortion to be performed after a fetal heartbeat is detected, which usually occurs between the fifth and eighth weeks of pregnancy.

The bill contains exceptions for rape and incest, medical emergencies, risk to the mother’s life or risk of physical impairment of the mother. The bill faces an uphill battle in the state Senate, where it will not be addressed until January 2020.

Gatling said the pro-life cause receives attention from annual events such as Life Chain and the March for Life. Charleston also hosted the National Right to Life Convention in July, which attracted about 500 people from around the country.

Stephen Boyle, respect life coordinator at St. Joseph Church in Charleston, is one of the prayer effort’s main organizers and regularly attends the vigils. Boyle believes a combination of public awareness and prayer has led to a decline in abortions statewide, and said the addition of pro-life sidewalk counselors in recent years has been a blessing for the effort in Charleston.

“These counselors know how to talk to the women and men coming to the clinic seeking abortions, and they bring an atmosphere of gentleness while sharing information about alternatives to abortion,” Boyle told The Catholic Miscellany, newspaper of the Diocese of Charleston. “Our presence at the clinics, plus regular public events like 40 Days for Life, makes people think about this issue.”

NEXT: County board OKs Tucson Diocese’s use of facility for asylum-seekers