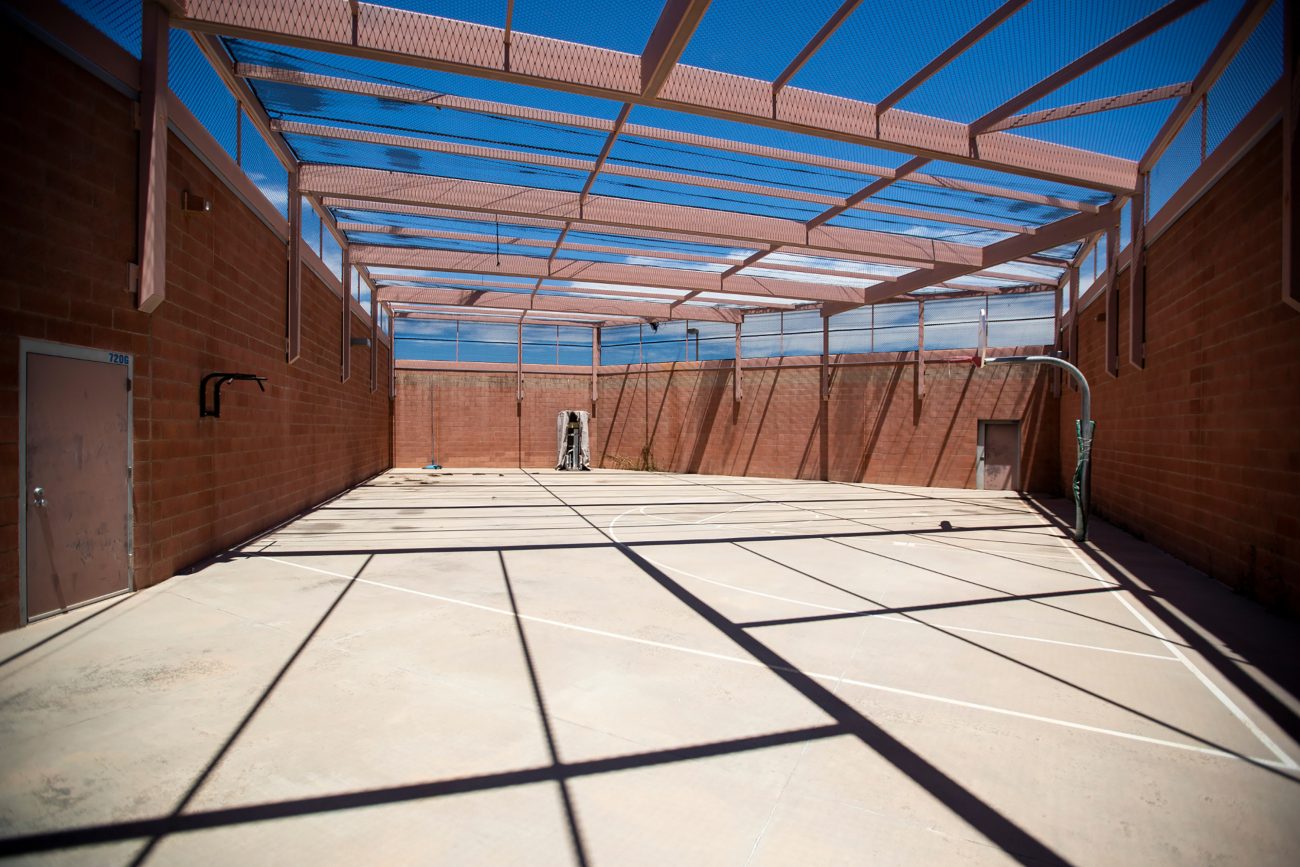 This is the outdoor recreation area at the Pima County Detention Center in Tucson, Ariz. Tucson Bishop Edward J. Weisenburger announced July 8 that the diocese’s Catholic Community Services agency has signed a lease with Pima County to use a shuttered juvenile detention facility as its new site for accommodating asylum-seekers brought in by federal officials from southern border locations. (CNS photo/Pima County)

TUCSON, Ariz. (CNS) — The Pima County Board of Supervisors voted July 22 to approve an agreement with Catholic Community Services and the Diocese of Tucson for use of vacant sections of the county’s Juvenile Detention Center on the city’s south side.

Chairman Richard Elias, who voted with supervisors Ramon Valadez and Sharon Bronson to approve the agreement, acknowledged that “we did a poor job in rolling this out.”

However, he urged members of all the community advocacy groups to find a way to work together moving forward.

Supervisors Ally Miller and Steve Christy voted against it.

Most of the public opposition came from local Methodist leaders, including a statement from Bishop Robert Hoshibata, who favored decentralization of centers where asylum-seekers may more welcome, when transported to Tucson by federal law enforcement.

Other opponents decried the use of a detention center as likely to cause severe trauma to those passing through. Four spoke against the agreement because of anticipated costs to the county taxpayers, especially for issues involving health care.

In early July, Catholic Community Services and the diocese had reached a tentative agreement with Pima County on turning the unused juvenile facility into a temporary shelter for asylum-seekers.

The agency, which is the diocese’s human services arm, has operated such a shelter at a former Benedictine monastery since the beginning of the year. It was scheduled to vacate the monastery July 31 — a deadline later extended to Aug. 6 — but no alternative had been found to house the 300 to 500 asylum-seekers there.

At the same time, U.S. Immigration and Customs Enforcement, and later Border Patrol, were shuttling asylum-seekers from border towns such as Nogales and El Paso, Texas, to Tucson.

Prior to the vote on the agreement between the county and the diocese for use of area in the juvenile facility, Pima County Executive Director Chuck Huckelberry noted that because costs associated with the individual units could not be separated from the costs for the entire facility, the document could not technically be a lease, but rather a “Cooperative Agreement for the Provision of Humanitarian Services,” provided at no cost to Catholic Community Services.

The vote came at a special board meeting July 22, following two weeks of public drama.

After the Pima County Board of Supervisors announced the tentative agreement on use of the facility July 8, the decision was criticized by some advocates, concerned about the use of a former jail, and about the costs to the county.

On July 17, Tucson Bishop Edward J. Weisenburger met with community and county leaders, and representatives of the Salvadoran, Mexican and Guatemalan consulates, to share information and clear the air.

At a news conference the same day, Peg Harmon, CEO of Catholic Community Services, said two school buildings owned by the Tucson Unified School District had been offered. However, she said, those facilities — along with other possible sites — failed to provide the same benefits as the county facility.

Harmon acknowledged that “there was not universal agreement” among all the groups serving the asylum-seekers about using a former detention center as a shelter. “We believe we do not have the additional time or the luxury to be uncertain as to where we will be when our last day at the monastery passes.”

Harmon said that since April 21, leaders of the Catholic agency had reviewed 25 different sites before deciding to accept the county location. A starting specification was that the facility had to be 45,000 square feet.

They looked at vacant hotels, schools and hospitals and warehouses. Costs of renovation, repair and rent, and standards governing shelters, such as the number of bathrooms required, ruled out the alternatives.

“We believe that (the county facility) is our only option today,” she said.

Since October 2018, Catholic Community Services — through its Casa Alitas program — has processed more than 16,000 asylum-seekers. The average stay has been one to three days. Staff assistance has included food, medical care, a safe place to sleep, fresh clothing and laundry, and transportation to the local bus station where they travel — many for days — to meet families and sponsors in host cities where their cases will be heard.

Teresa Cavendish, the agency’s director of operations, was asked at the July 17 news conference if the new center might still be needed in a year, when the proposed lease expired.

She noted that recently the flow of asylum-seekers has hit a lull, but that isn’t expected to last long. Similarly, there was no way to predict what the need would be in a year, although there is no end in sight to the current flow of immigrants.

“We really have to be able to think on our feet and make adaptations along the way,” said Bishop Weisenburger. “That’s what it means to be a really vibrant and energetic social service agency.”