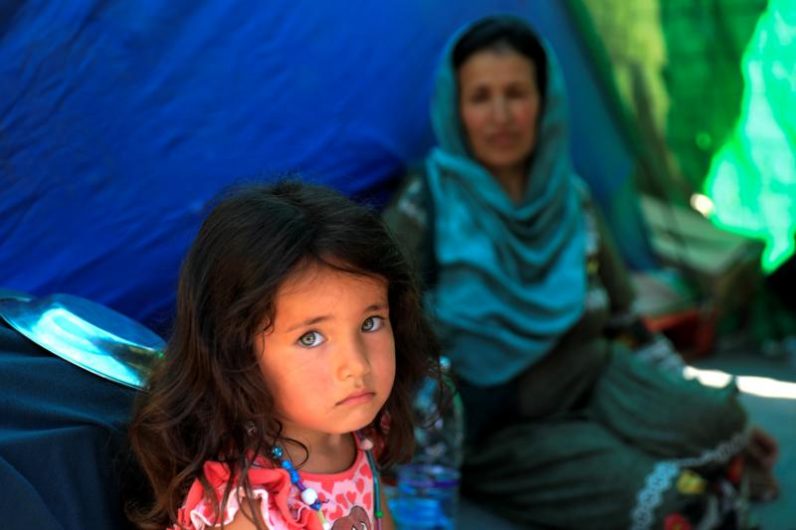 A refugee from Afghanistan sits in her family’s tent at a makeshift camp in Samos, Greece, June 25, 2019. Catholic and other faith-based groups said July 19 they are “appalled” by reports officials in the Trump administration are considering “zeroing out” the number of refugees accepted by the United States. (CNS photo/Giorgos Moutafis, Reuters)

WASHINGTON (CNS) — News that officials in the Trump administration are considering “zeroing out” the number of refugees accepted by the United States brought an immediate outcry from Catholic and other faith-based agencies urging the government to reconsider such a move.

“The last couple of years have been historically low in terms of refugee resettlement here in the U.S.,” said Bill Canny, executive director of the U.S. Conference of Catholic Bishops’ Migration and Refugee Services. “Of the millions of refugees around the world, only about 1% will be resettled, that number will decrease and leave more people vulnerable if these actions come to fruition.”

“I would implore the decision-makers to reconsider these devastating cuts,” Canny said July 19 in remarks to Catholic News Service. “Our military relies on the work of interpreters while in the field and those interpreters are putting their lives and their families lives on the line. To not open our arms to them when they have done so for us, would go against who we are as a nation.”

Setting caps on the number of refugees to be accepted from five global regions is done at the beginning of each fiscal year by the president, in consultation with Congress.

A U.S. State Department report said that in fiscal year 2019, the top 10 countries of origin for refugees admitted into the U.S. to be resettled were: Congo, Myanmar, Ukraine, Eritrea, Afghanistan, Syria, Iraq, Sudan, Burundi and Colombia.

In a news release issued late July 18, the Lutheran Immigration and Refugee Service said that as the Trump administration prepares to announce the new ceiling for refugee arrivals in fiscal year 2020, reports emerged that “the White House is seriously considering effectively shuttering the U.S. refugee resettlement program by setting the refugee ceiling at zero.”

“It is horrifying to think that, by the stroke of a pen, the president can make a decision that will destroy a legacy of welcome that has been centuries in the making,” said Krish O’Mara Vignarajah, president and CEO of LIRS, which with MRS is one of a handful of voluntary agencies currently charged with refugee resettlement in the U.S.

“LIRS has been doing this work for 80 years. We have seen firsthand the life-changing impact of this crucial program,” LIRS added. She herself is a former refugee, having come to the U.S. with her family from Sri Lanka when she was 9 months old.

“Setting the U.S. refugee ceiling at zero would be an egregious assault on fundamental American values. And quite frankly, the humanitarian implications of this decision would be enough to nullify our global reputation as leaders of the free world,” Vignarajah said. “(President Donald Trump) simply cannot afford to move forward with this proposal — not if he seeks ongoing support from people of faith all across the United States.”

Before admission to the U.S., each refugee undergoes an extensive interviewing, screening and security clearance process.

The number of refugees allowed into the country was capped at 45,000 after Trump became president in 2017 and was scaled back to 30,000 refugees for fiscal year 2019.

Refugee Council USA, a coalition of organizations committed to refugee resettlement and protection that includes MRS and Vignarajah, said July 18 it was “appalled” by the proposal to “zero out” the refugee number.

“The administration has all but confirmed that our country will reach the 30,000 refugee admission goal for FY2019,” Canny, of MRS, said in a statement released by the council, which he chairs. “We have been relieved by that important sign of the program getting back on track after a couple of extremely difficult years. In light of that hopeful sign, reports of further reducing the refugee goal to zero make no sense at all.”

He added: “There continue to be refugees who need the protection that resettlement provides, including refugees who are fleeing religious persecution. Faith based communities and volunteers across the U.S. have the desire, capacity and resources to return to at least our historically normal level of welcoming refugees.”

NEXT: Did Apollo 11 mission make Orlando’s founding bishop the bishop of moon?