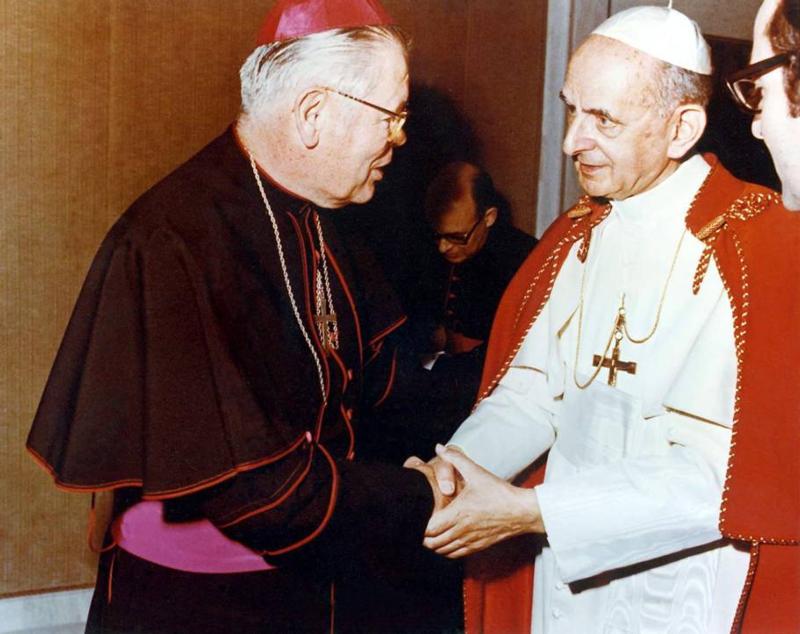 Bishop William D. Borders is greeted by St. Paul VI in an undated photo. Bishop Borders was the founding bishop of the Diocese of Orlando, Fla., whose territory included Brevard County, home to Cape Canaveral and the Kennedy Space Center, from which the U.S. has launched space missions since the early 1960s. He was named Baltimore’s archbishop in 1974. (CNS photo/The Florida Catholic)

Although Archbishop Borders was the 13th archbishop of Baltimore, at one time he may have been the bishop of a larger territory — much larger.

It’s important here to note that one of those counties, Brevard, is home to Cape Canaveral and the Kennedy Space Center, from which the U.S. has launched space missions since the early 1960s. (A fun fact about the area code for Brevard County: It’s 321, as in “3-2-1 liftoff.”)

The Florida Catholic newspaper of July 25, 1969, features a headline “Religious leaders praise landing of men on moon.” On the front page, then-Bishop Borders is seen in a photo taken during a tour of the launch facilities on the eve of the July 16 liftoff for Apollo 11, the first mission to land on the moon. The bishop and New York Cardinal Terrence Cooke are standing not far from the launch pad with the massive Saturn V rocket behind them.

In an article below headlined “Will moonshot affect theology?” the newspaper’s editor, Father David Page, asked various religious leaders to reflect. Cardinal Cooke said, “From the viewpoint of the moon, it will immediately become apparent to man that we on Earth are really only one family and I think if this only sinks in, it will have tremendous spiritual significance in terms of lasting peace, understanding and brotherhood.”

Rabbi Aryeh Lev told the Florida Catholic the moon flight was another example of God revealing new things about his creation.

At the prelaunch banquet honoring the interfaith leaders, there was some tongue-in-cheek banter about whose diocese included the lunar territory, with Bishop Borders contending that since the mission was being launched from his diocese, that was his responsibility.

Cardinal Cooke, who was vicar of the Military Ordinariate (now the U.S. Archdiocese for the Military Services), which served the Air Force Base at Cape Kennedy, said he should be allowed to accompany Bishop Borders “in the spirit of collegiality.” Miami Archbishop Coleman F. Carroll claimed that tradition says the “moon is always over Miami,” so he called dibs.

Bishop Borders apparently took it up a notch, however, when he met later that year with St. Paul VI for his “ad limina,” a meeting required of diocesan bishops every five years to greet the pope and discuss issues with the heads of various Vatican departments.

The pope had eagerly followed the moon mission on television and was photographed checking out the moon through a telescope at the Vatican Observatory near Castel Gandolfo, the pope’s summer home.

According to a remembrance written in 2016 by Renae Bennett, Orlando’s diocesan archivist, “During his visit, Bishop Borders mentioned to the pope that he was the ‘bishop of the moon.’ Responding to the pontiff’s perplexed reaction, Bishop Borders explained that according to the 1917 Code of Canon Law (in effect at that time), any newly discovered territory was placed under the jurisdiction of the diocese from which the expedition that discovered that territory originated.

It’s not known whether the pope affirmed that claim. Jennifer Drow, secretary of communications for the Diocese of Orlando, said that she is sure Bishop John G. Noonan, the current bishop of Orlando, does not consider himself bishop of the moon and the International Space Station, also launched from Kennedy Space Center.

“I’m sure he would say God is the bishop of the moon,” Drow said on the 50th anniversary of the Apollo 11 launch.

Nonetheless, Archbishop Borders still laid claim to being the first bishop of the moon. Perhaps someday, when we have colonists on the lunar landscape, and the church is there to serve their pastoral needs, the Catholic center there will have a photo of Earth’s satellite’s “first bishop.”