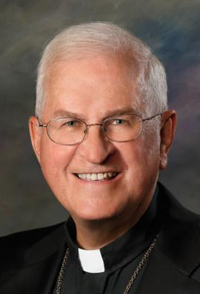 WASHINGTON (CNS) — Archbishop Joseph E. Kurtz of Louisville, Kentucky, has resigned as chairman of the U.S. bishops’ Committee for Religious Liberty as he undergoes extended treatment for bladder and prostate cancer.

Bishop Robert J. McManus of Worcester, Massachusetts, was appointed July 23 to serve as acting chairman of the committee by Cardinal Daniel N. DiNardo of Galveston-Houston, president of the U.S. Conference of Catholic Bishops.

The appointment will continue until the bishops’ fall general assembly in November when a permanent chairman will be elected.

“We are praying for Archbishop Kurtz, especially as he undergoes an intense treatment plan at Duke Cancer Institute over these next weeks and months,” Cardinal DiNardo said in a statement.

The committee is among the most recently organized by the USCCB and has assumed a high profile with its emphasis on promoting religious freedom globally and in the U.S. The bishops first established it as an Ad Hoc Committee for Religious Liberty in 2011 to address growing concerns over the erosion of freedom of religion in America.

During their June general assembly in 2017, the bishops voted to establish a permanent Committee for Religious Liberty. At their fall general assembly that year, they elected Archbishop Kurtz as its chairman. He succeeded Baltimore Archbishop William E. Lori, who had served as chairman of the committee since its creation. The Louisville prelate served as USCCB president from 2013 to 2016.

Archbishop Kurtz, 72, announced July 10 in an online post published by The Record, the Louisville archdiocesan newspaper, that he had been diagnosed with urothelial carcinoma and would remain in North Carolina during 12 weeks of immunotherapy and chemotherapy.