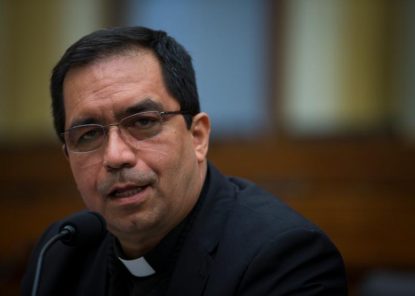 WASHINGTON (CNS) — For weeks, Salvadoran bishops have remained largely silent about the deaths of a little girl and her father, both natives of El Salvador, who drowned in the Rio Grande River in late June trying to cross the border from Mexico into the United States. But a heartfelt letter issued July 21 shows the two have been clearly on the minds of the Catholic bishops of the country as they used the pair’s death to express sorrow over the fate of migrants and their suffering.

The photo of the nearly 2-year-old Valeria clinging to her father, Oscar Martinez Ramirez, 25, lifeless on the banks of the Rio Grande, is “evidence of the painful drama of migration,” said a statement issued by the Salvadoran bishops’ conference.

“This young father and his little daughter symbolize the countless number of our brothers and sisters who suffer inhumane situations including, in some cases, death,” said the statement, which also was read at a news conference July 21 by Archbishop Jose Luis Escobar Alas of San Salvador in the country’s metropolitan cathedral.

The image of the father and daughter, they wrote, is “a silent and heartbreaking cry that moves us deeply.”

Using the plight of the Martinez family, they called attention to the mistreatment of migrants, particularly children. They offered solidarity to Salvadorans making the immigration journey and those who have already made it and are worried about being deported, and they spoke against the causes that have forced their fellow Salvadorans to flee: violence, lack of opportunities at home, corruption.

They said they were concerned with the situation that hundreds of thousands of Salvadorans living in the United States are currently in, including facing expulsion or being trapped at the border “in deplorable conditions.”

“Their suffering is painful to us, particularly, the cry of children in detention centers, separated from their parents,” the letter said and warned that “this situation can cause irreparable psychological damage.”

God mandates that one must not violate in the rights of the stranger, they wrote, pointing to Deuteronomy 24:17: “You shall not deprive the resident alien or the orphan of justice, nor take the clothing of a widow as pledge.”

They said they wanted to encourage Salvadorans in fear of not being able to stay in United States to commit themselves to fight for their rights and not to be solely spectators.

“The active participation of each of you with the institutions that defend your rights is essential,” they wrote. “Let us constantly invoke God and, together with him, we can all fight for the defense of your rights.”

But they also seemed to cast blame on past administrations in the country for the plight of Salvadorans forced to leave and said that corruption “has had a very serious impact,” by diverting resources that should have been used all along to help the economic situation of many citizens living in extreme poverty.

“Our country must be sensitive and fair, always ensuring the good of the migrant,” they said. “In no way can it violate the rights of migrants who arrive at our borders (by) preventing their passage in our territory. May God bless those who give a hand to migrants and … through the Queen of Peace and St. Oscar Romero, may God protect our migrant brothers and bless us all.”

NEXT: Archbishop Kurtz steps down as bishops’ religious liberty chairman