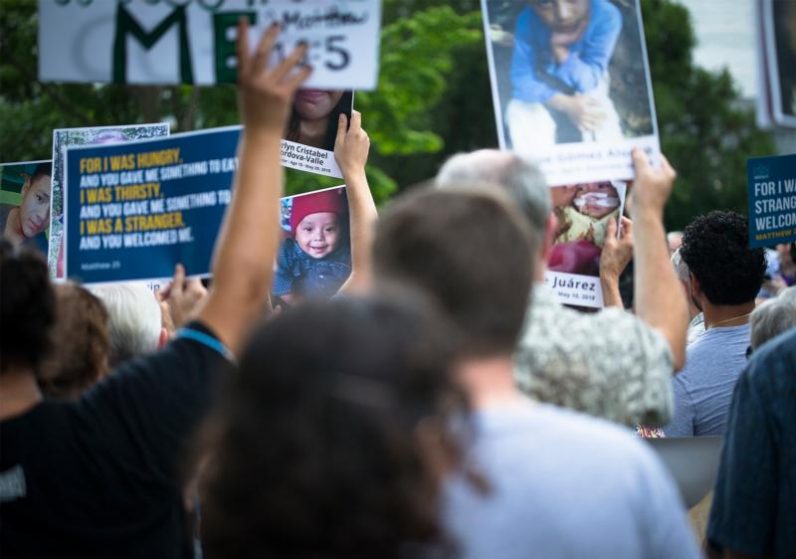 Catholic leaders and advocates protest the Trump administration’s handling of detained immigrant children during a “Catholic Day of Action for Immigrant Children” July 18, 2019, near the U.S. Capitol in Washington. (CNS photo/Tyler Orsburn)

WASHINGTON (CNS) — Though they weren’t present, at least seven U.S. bishops made their views known via statements supporting the July 18 “Catholic Day of Action for Immigrant Children” near the U.S. Capitol.

During the demonstration, at least 70 men and women religious and lay Catholics were arrested in the Russell Senate Office Building for civil disobedience in protesting immigration policies they say have led to the deaths of migrant children and their parents at the U.S.-Mexico border. Those arrested were released later that day after being charged with was “incommoding, crowding and obstructing” and choosing to pay a $50 fine or request for a court date.

Most of the prelates who weighed in with statements, like Bishop John Stowe of Lexington, Kentucky, called out government policies that separated families, led to the detention of children in immigration custody and kept would-be asylum-seekers to the U.S. in dangerous cities on the Mexico side until their petitions are heard by a court.

“There has been one chapter after another of serious atrocities intentionally perpetrated on some of the most vulnerable people: family separation, loss of children in custody, two dozen deaths in ICE (Immigration and Customs Enforcement) custody since 2017, children in cages, living under bridges in extreme temperatures, shielded from public view, assaulted and brutalized, underfed and without facilities for bathing or hygiene,” said Bishop Stowe, bishop-president of Pax Christi USA, who attended the 2018 gathering at the Capitol.

“Now we have raids targeting families — families who have fled situations of danger from gang violence, drug trafficking, and economic desperation — and changing rules about who qualifies for asylum right as people are fleeing for their lives,” he added.

Instead of comprehensive immigration reform, the government looks for a path toward enforcement of policies that “do not work no matter how much they are escalated,” he said.

“Cruelty toward the suffering and bullying the most vulnerable should not be national policy and we cannot allow it to continue,” said Bishop Stowe. 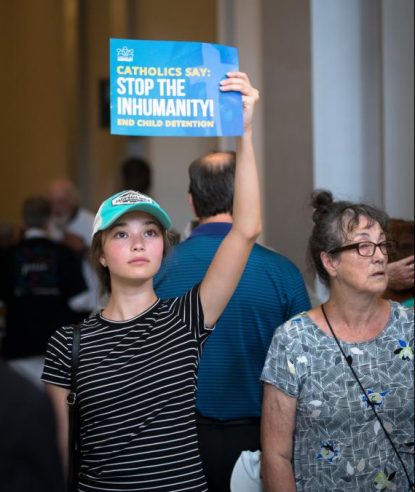 A woman protests the Trump administration’s handling of detained immigrant children during a “Catholic Day of Action for Immigrant Children” July 19, 2019, in the Russell Senate Office Building in Washington. (CNS photo/Tyler Orsburn)

Auxiliary Bishop Edward M. Deliman of Philadelphia said he was pleading for the safety and protection of immigrant children.

“All children belong with their parents and families,” he said. “The family is the God-created school where love is taught and safety is assured. Troubling are the images we have seen in the land of the free. Safe borders do not mean incarcerating children.”

Bishop Robert W. McElroy of San Diego, in the list of statements provided by Faith in Action, a grassroots, national faith-based organizing network, also offered a defense of migrant families.

“We stand in a moment when our government has weaponized fear — the fear being sown within our nation as a whole that refugees and immigrants, who have been America’s historic lifeblood, have now become the enemy; and the even more reprehensible fear being unleashed upon the hearts and souls of immigrant mothers and fathers that they will be separated from their children purely as an act of intimidation,” he said.

“Your witness today repudiates this weaponization of fear. It points to the systematic distortions of the truth which underlie our nation’s rejection of its most sacred legacy and identity,” Bishop McElroy said. “Your witness testifies in clarion tone to the utter rejection of the Gospel of Jesus Christ that lies in the very act of separating children and parents for political purposes.

“And it makes clear that the voice and the solidarity and the compassion of the church will be dramatically present in this battle for the soul of our nation.”

The bishops who lent their voice to the event in Washington, organized by a coalition of Catholic and other faith-based groups, praised the hundreds of participants and their defense of migrants.

Bishop Anthony B. Taylor of Little Rock, Arkansas, said he wanted to express support for participants’ efforts “to convince the administration that they must stop demonizing and detaining children and families who pose no threat to anyone.”

“The images of those who have suffered and died trying to make their way to freedom ‘cry to the heavens,’ in the words of our USCCB (U.S. Conference of Catholic Bishops) leadership,” he said. “Our faith calls us to oppose this cycle of violence.”

The majority of refugees and asylum-seekers are fleeing desperate circumstances in their countries of origin, Bishop Taylor said, “and are parents who have an obligation before God to protect their children and provide for them.” If they can’t do that in their home countries, they have the right “to migrate to a place where they can fulfill these parental responsibilities,” he added.

“They are people like our own immigrant ancestors, many of whom came here fleeing desperate circumstances in the past — no one immigrates because things were going great in their home country,” he said. “And since many of us would not even be here today had our own immigrant ancestors not been able to come here in their time of distress, we now have an obligation to do all that we can to help our brothers and sisters who are dealing with desperate circumstances in the present.

“This ‘Day of Action’ focuses on immigrant children, the most vulnerable of those who are being traumatized by the actions of our government, separating them from their parents, often neglecting their most basic needs, but the same principles apply to adults as well.”

Bishop Shelton J. Fabre of Houma-Thibodaux, Louisiana, said that as the country faces an unprecedented humanitarian crisis, “I stand in solidarity with brother priests and bishops, women religious and lay Catholics in strongly urging our president to reconsider the ongoing detention of immigrant children and the separation of families.”

He added, “It is our Christian duty to seek a just and humane resolution to this untenable situation. We are a country founded by the blood, sweat and tears of immigrants, and we are a country that is better than what we’re currently displaying on the world stage.”

Bishop Edward J. Weisenburger of Tucson, Arizona, said that while nations have the right to maintain and supervise their borders, it must be balanced with the rights of immigrants, especially those fleeing catastrophic or life-threatening situations.

“How we respond to their needs reveals the extent to which we have made the Gospel of Jesus Christ our own,” he said. “It is my hope that the teachings of our faith will inform the dialogue and decisions related to the humanitarian crisis unfolding before our eyes. In this way we will prove ourselves the best of Catholics as well as the best of American citizens.”

“There are not two categories of people, some born to have everything and others who can’t enjoy the happiness that God has created for all,” he said, recalling the words of the slain archbishop during a December 1979 homily. “In this moment of injustice for migrants and the poor, we people of faith are called to work for justice.

“Justice is a beautiful robe, paid for with tears and sacrifice, sown together with long vigils and witness, and placed finally on the shoulders of the poor and the oppressed,” he said. “You who know the goodness of God have faith that the Lord of history and life is working even now to build a temple of justice, throughout the Americas, in every heart and across every border. You know he comes in the stranger, in the afflicted, in the migrant.”

Bishop Seitz continued: “Do not tire in your vigil or grow timid in your witness today and may a lack of compassion never dry your tears or harden your hearts. For with the Lord we are building that temple, wherein there will be an end to suffering and separation and estrangement, and there will be justice overflowing and enough for all.” 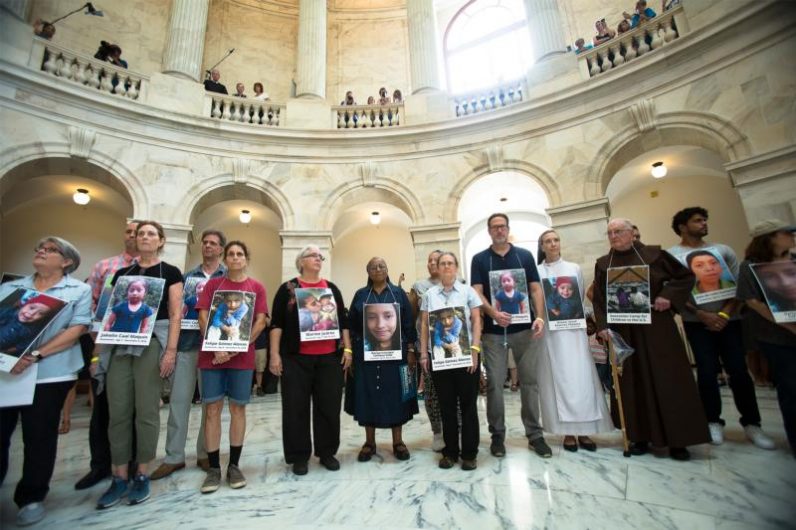 PREVIOUS: Moon landing inspired a country and a career in space flight