Moon landing inspired a country and a career in space flight 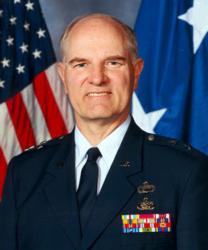 NASHVILLE, Tenn. (CNS) — Retired Maj. Gen. Mike Wiedemer was an aerospace engineering and ROTC student at the University of Notre Dame in July 1969 when Apollo 11 launched and Neil Armstrong took a “giant leap for mankind” by becoming the first man to walk on the moon.

“I remember well the day our astronauts landed on the moon” said Wiedemer, former commander of Arnold Engineering Development Center in Tullahoma. “I remember looking up at the sky and being amazed that people were up there.”

He went on to serve in the Air Force for 32 years, eventually commanding one of the world’s largest and most technically advanced aerospace ground test facilities.

“My career as an aerospace engineer in the Air Force was certainly inspired by Apollo 11,” Wiedemer, a member of Good Shepherd Parish in Decherd, told the Tennessee Register, newspaper of the Diocese of Nashville.

While at Arnold, Wiedemer was on teams that tested multiple NASA, military and commercial air and space craft, including the Space Shuttle, the Hubble Space Telescope, stealth aircraft and airline jet engines.

“When you see the pictures coming back from deep space (taken by the Hubble), you remember the tiny parts you worked on,” he said.

One of the projects Wiedemer is most proud of is his work on the Global Positioning System satellite technology, long before it was as ubiquitous as it is today. Now, “if GPS stopped working, Western civilization would pretty much come to a halt,” he said, noting how much computer chips, cellphones and mobile devices rely on the technology to function properly.

A number of modern-day scientific advancements “were spawned from the original Apollo 11 program,” Wiedemer said, such as the computer microchip, efficient insulation and germ isolation techniques. In fact, scientists pioneered thousands of technologies during the space-race era that are now part of modern living, such as cordless power tools and breathing masks.

“I’m a big proponent of space exploration for the benefit of mankind,” Wiedemer said.

All these years later, “I am still enormously proud and grateful to all those on the NASA team who contributed to the success of the manned moon missions,” he said.

Wiedemer would be excited about another moon mission. “Mankind needs to have large goals, big horizons,” he said. Investing in the space program, “is one of the best investments” for its ability to create new jobs and inspire new innovations, he said.

Wiedemer, who grew up in a strong Catholic enclave of western New York state, first came to Tennessee in the early 1980s, when he served as a test facility engineer and project manager at Arnold. It was then that he joined the Winchester Council of the Knights of Columbus.

Even as he moved around the country on different assignments, “I decided to keep my membership there, because I knew I was going to be … ultimately returning there,” he told the Tennessee Register when he was named Tennessee’s Knight of the Year in 2015.

The previous year, he had been deeply involved in mobilizing support for the pro-life amendment to the Tennessee Constitution, which passed as a ballot measure Nov. 1, 2014. He also supports the Cowan Home, a local group residential house for adults with intellectual disabilities, and serves as an extraordinary minister of holy Communion and lector at Good Shepherd.

As a member of the military and a lifelong student of theology, Wiedemer said, he was always interested in the moral and ethical aspects of just-war theory, reading everything on the topic, from St. Augustine to modern-day Vatican advisers.

Wiedemer jokes that he has tried “and failed” retirement several times but has now found a new mission for his “final frontier.” He joined the Diocese of Nashville’s permanent diaconate formation program that began earlier this year. He and 15 classmates from around the diocese study and meet for one weekend of classes per month for four years; they are on track to be ordained in 2023.

“The call was always there,” Wiedemer said, but now was the time to make the commitment, he added.

Laurence a staff writer and photographer at the Tennessee Register, newspaper of the Diocese of Nashville.