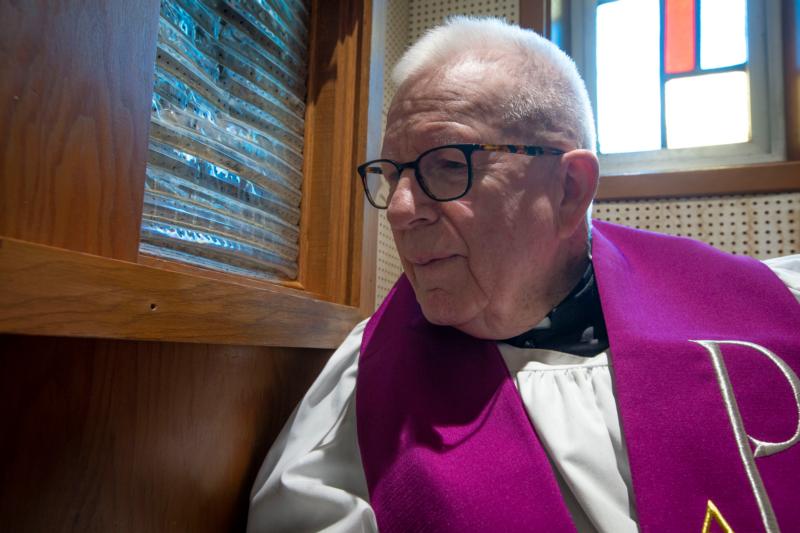 WASHINGTON (CNS) — For centuries, the Catholic Church has maintained that what a penitent says to a priest in the confessional is strictly confidential, but in 2019 that rite continues to be challenged by governments.

Church scholars assert the concept of the seal of confession was given to the apostles by Jesus, eventually developing into the sacrament of penance, which provides the faithful with an opportunity to confess their sins and to be reconciled with God.

The sacred practice is private, confidential and repeatable.

Governmental leaders have challenged the priest-penitent privilege of the seal of confession since at least the 14th century, prompting priests to sacrifice their freedom and sometimes their lives protecting that confidentiality.

In the wake of renewed attention on the clergy child sexual abuse scandals, 21st-century lawmakers in Australia, the United Kingdom, Ireland, Chile and the U.S. have introduced measures that would compel priests to report to civil authorities information related to child abuse and neglect learned in the confessional.

“There are many reasons why we are seeing challenges to the seal of confession today,” said Father Ronald T. Kunkel, theology professor at Mundelein Seminary at the University of St. Mary of the Lake in Illinois, near Chicago.

The church has suffered “self-inflicted wounds” to its reputation and credibility from the clergy sex abuse crisis, making the seal of confession vulnerable to governmental intrusion, Father Kunkel told Catholic News Service in an April interview.

“There have been terrible sins and crimes that have been committed, including by members of the hierarchy,” he said. “But, I think in many cases this is being used as an excuse in order to further marginalize the church in our society today.”

That reaction has been echoed by countless theologians, canon lawyers, priests and penitents throughout the U.S., particularly in California, where a bill making its way through the state Legislature that attempts to amend its mandatory reporting laws to require priests to provide civil authorities with information about child abuse or neglect confessed by priests or co-workers during the sacrament of penance.

Critics of that legislation, S.B. 360, call it governmental overreach that clearly violates religious freedoms enjoyed in the U.S., as well as its tradition of separation of church and state. Some also fear that authorities could send someone in to confess to abuse in order to prosecute the priest for failing to report it.

Supporters of the California bill say it closes a loophole in a law that provides cover for pedophile priests — and other criminals — who receive absolution from the sin of child sexual abuse without being held accountable by society. They believe it emboldens such penitents to continue to victimize others.

Laws making it an offense for a priest’s failure to report the confessions of child sex abuse have already been passed in three Australian states and similar acts are being considered in Chile.

“I think it’s worth noting that the mandatory reporting statutes, the clergy-penitent privilege, and the seal of confession, these three doctrines if you will, are all in tension with each other,” said Mary Graw Leary, a professor of law at The Catholic University of America in Washington and a former prosecutor specializing in the abuse and exploitation of children and women. “They all serve very positive social goods. But, these kinds of circumstances bring them in tension with each other and it’s a very difficult problem to solve.”

Pope Francis’ new universal Catholic law “Vos estis lux mundi” (“You are the light of the world”) — released in early May — says that every priest or member of a religious order who knows of a case of clerical sexual abuse of a minor or who has good reason to believe that such abuse took place must report that abuse to the bishop of the place where the abuse occurred; if the accused abuser is a bishop, the report must be made to the metropolitan archbishop or the Vatican nuncio.

Bishop Juan Ignacio Arrieta, secretary of the Pontifical Council for Legislative Texts, told CNS that the Catholic Church also obliges all of its members to act in accordance with local civil law on mandatory reporting.

The seal of confession, however, remains inviolable and is not affected by the new norms.

The Australian Royal Commission into Institutional Responses to Child Abuse issued a report in 2017 recommending the Catholic Church change the Code of Canon Law to allow priests to break the seal of confession when a penitent confesses to the sexual abuse of minors.

That recommendation also has been championed by Father James E. Connell of the Archdiocese of Milwaukee, a canon lawyer, who says protecting the innocent should be the church’s first priority.

However, Father Connell seems to be in the minority of Catholic clergy and canon lawyers advocating for such a change in church law.

“There is no indication the church will change canon law regarding the seal of confession” and it shouldn’t, said Dominican Father Pius Pietrzyk, a canon and civil lawyer who teaches at St. Patrick’s Seminary and University in Menlo Park, California.

In the sacrament of reconciliation, the penitent is communicating with God himself and the priest is simply acting as an intermediary, Father Pietrzyk told CNS in a May interview.

There is no evidence that laws requiring priests to report child sexual abuse heard in the confessional will actually protect children, said Msgr. Stephen J. Rossetti, a psychologist and expert on the spiritual and psychological health of priests, who is a theology professor at The Catholic University of America.

It would be rare occurrence for a pedophile to confess the sin of child sexual abuse, Msgr. Rossetti told CNS in an April interview.

“They are in such denial that what they are doing is child abuse, they just don’t confess that,” he said. “I have never heard it in the confessional. I never will. None of the priests I know have heard it.”

Furthermore, if Catholics believe there is even a remote possibility that a priest will be obligated to report to authorities what they say during penance, they will lose faith in the sacrament of reconciliation and will be unlikely to incriminate themselves, said Auxiliary Bishop Peter L. Smith of Portland, Oregon, who also is a canon lawyer.

Because the Code of Canon Law states the penalty for a priest who violates the seal of confession is automatic excommunication — which can only be lifted by the pope himself — most members of the clergy would go to jail rather than comply with these laws, said Father Thomas V. Berg, professor of moral theology at St. Joseph’s Seminary in Yonkers, New York.

There are currently seven U.S. states that have laws requiring priests to report criminal information gained in the confessional, which are New Hampshire, North Carolina, Oklahoma, Rhode Island, Tennessee, Texas and West Virginia.

There are no reports that priests in those states have reported to civil authorities information learned in the confessional and to date no members of the clergy have been charged with failing to do so.
It’s unclear if these statutes would survive a legal battle in the U.S. courts or be ruled unconstitutional, Graw Leary said.

It’s also uncertain if these laws will have any impact on the safety of children, she said.

“Right now, with the statutes on the books, it may have no effect whatsoever because it may just not become a factual circumstance that will arise,” Graw Leary said. “However, if a priest were to be forced to disclose (information gained in the confessional) or were to be legally punished for failing to comply with the mandatory reporting statue, that could produce some kind of precedence.”

NEXT: California bill aims to protect children by breaking seal of confession