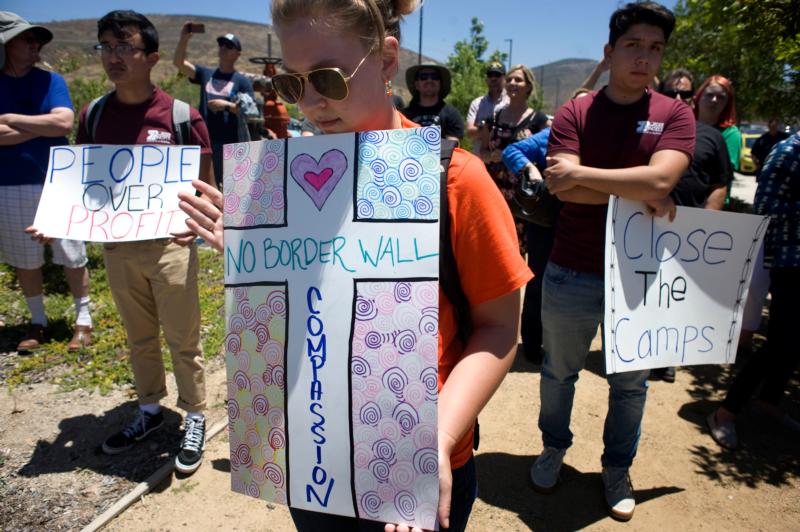 Melissa Balliet holds a sign during a July 2, 2019, protest in San Diego outside the Otay Mesa Detention Center for those entering the U.S. illegally seeking asylum. The demonstration was part of a nationwide protest to call for the closing of such facilities. (CNS photo/David Maung)

WASHINGTON (CNS) — The Catholic Legal Immigration Network joined three other organizations in filing a lawsuit against the federal government over a memo that the groups say changes the rules retroactively for unaccompanied immigrant minors seeking asylum.

The suit was filed in the U.S. District Court for Southern Maryland July 1, the day after the new policies outlined in the memo took effect. CLINIC announced the filing of the suit in a July 8 news release.

The plaintiffs in the case are four “unaccompanied alien children,” known in immigration shorthand as UACs. All are male. Two are from Guatemala and two are from El Salvador. The suit seeks class-action status for all such UACs in their situation.

Named as defendants in the suit are the federal Department of Homeland Security and its acting secretary, Kevin McAleenan, as well as U.S. Citizenship and Immigration Services and its acting director, Ken Cuccinelli.

It cited the William Wilberforce Trafficking Victims Protection Reauthorization Act of 2008, which “relieves unaccompanied immigrant children of two procedural hurdles to accessing the asylum system, providing a more child-appropriate way for the government to process their claims to protection under U.S. and international law fairly.”

However, a May 31 memo, called in the suit “the 2019 Redetermination Memo,” scuttles the policy of the law. The memo was only posted on USCIS website, and not published in the Federal Register, “and the agency did not invite public comment on any of the new directives set forth in the memorandum,” the suit said.

The policy outlined in the memo, it added, “will be implemented retroactively — applying to individuals who already had asylum applications pending before USCIS, even those whom USCIS already interviewed, as of June 30, 2019, as well as to others who have relied upon USCIS’ 2013 policy.”

Moreover, the new policy “profoundly undermines plaintiffs’ rights, and the rights of other unaccompanied children who have filed for or plan to file for asylum in the United States,” the suit said.

One benefit of the 2008 law, the suit noted, was that “instead of having to be cross-examined in an adversarial courtroom by trained government lawyers — without the right to appointed counsel — a UAC applicant is seen by USCIS asylum officers trained to conduct non-adversarial interviews and apply child-sensitive and trauma-informed interview techniques.”

However, “under the new policy, they will be deprived of their right to seek asylum before USCIS, and will face an adversarial process in which a DHS prosecutor subjects them to cross-examination and advocates for their deportation. Further, plaintiffs may lose their eligibility to seek asylum entirely by retroactive imposition of a filing deadline that was inapplicable to their applications at the time they were filed.”

This represents “significant and harmful policy changes that undermine the purpose of and inconsistent with the TVPRA,” the suit said.

One plaintiff’s parents were murdered before the plaintiff fled to the United States. Another left after being subjected to violence due to the plaintiff’s “perceived sexual orientation,” according to the suit.

The minors “sought safety in the United States without understanding the legal options that exist, including asylum,” it said.

During debate on the bill, Sen. Dianne Feinstein, D-California, said: “I believe we have a special obligation to ensure that these children are treated humanely and fairly. Unfortunately, without this legislation, there would be no procedure to make sure that happens. Currently, when a child is apprehended by immigration authorities, that child usually knows nothing about U.S. courts or immigration policies and frequently does not speak English.”

A May 20 memo from USCIS “confirmed to public stakeholders that the asylum policy and procedures set forth in the 2013 Kim Memorandum remained in effect.” The Kim Memorandum — named for Ted Kim, acting chief of the USCIS Asylum Division — was a response outlining USCIS policy changes after a 2012 ombudsman’s report detailing implementation problems after the 2008 law was passed.

But the May 31 Redetermination Memo — not made public until June 14 — reversed virtually everything that had been said in the May 20 memo, noting it would take effect June 30, 30 days from the date of the new memo.

“The directives in the 2019 Redetermination Memo establish a binding norm and leave asylum officers with no discretion,” the suit charged.

The suit noted the “defendants’ failure to promulgate regulations despite the TVPRA’s mandate to do so,” adding: “The agencies have not published a notice of proposed rulemaking, and have made no progress toward promulgating regulations implementing the UAC provisions of the TVPRA.”

The suit spells out the consequences for each of the plaintiffs if the May 31 Redetermination Memo is implemented.

“The 2019 Redetermination Memo is arbitrary and capricious because, for example, it does not address, nor acknowledge, any of the reasons for adopting the asylum policy in place since 2013,” the suit said. “Defendants have failed to provide any explanation, much less a reasoned explanation, of how the 2019 Redetermination Memo addresses the issues leading to the adoption of the 2013 Memorandum.”

“Defendants violate plaintiffs’ due process rights by retroactively applying the asylum rules,” it added. “The 2019 Redetermination Memo will actually penalize the plaintiffs’ past conduct taken in reliance on USCIS policy in place since 2013.”

The suit said, “The asylum rules set forth in the 2019 Redetermination Memo are legislative rules, not interpretive rules, because, for example, they effect a substantive change in existing law. The 2019 Redetermination Memo is not a statement of policy that is exempt from public notice, including because it establishes binding rules on all asylum officers without leaving room for any exercise of discretion.”

Joining CLINIC in filing the suit are Kids In Need of Defense, Public Counsel and the Boston-based Goodwin Procter law firm.