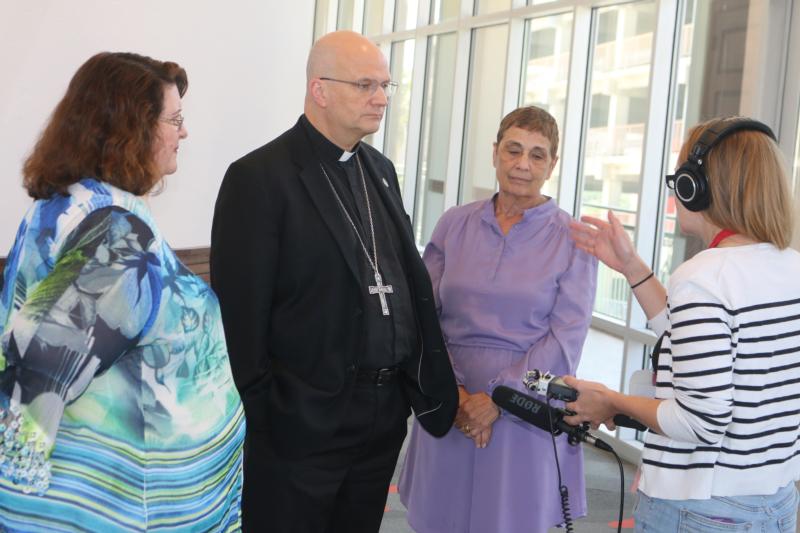 Bishop Edward J. Weisenburger of Tucson, Ariz., responds to questions from a reporter July 8, 2019, following an announcement the diocese’s Catholic Community Services agency has signed a lease with Pima County for use of a shuttered juvenile detention facility as its new site for accommodating asylum- seekers brought in by federal officials from southern border locations. Joining the bishop from Catholic Community Services are Teresa Cavendish, director of operations, and Peg Harmon, executive director. (CNS photo/Michael Brown, Catholic Outlook)

TUCSON, Ariz. (CNS) — Catholic Community Services in the Tucson Diocese has reached a tentative agreement with Pima County to turn an unused juvenile detention facility into a temporary shelter for asylum-seekers.

The agency, which is the human services arm of the diocese, has operated such a shelter at a former Benedictine monastery since the beginning of the year. It is scheduled to vacate the site July 31 but no alternative had been found to house the 300 to 500 asylum-seekers currently there.

The 83-year-old monastery, formerly home of the Benedictine Sisters of Perpetual Adoration, was purchased in September 2017 by developer Russ Rulney, who leased it to Catholic Community Services for its relief efforts. The agency welcomed its first “guests” Jan. 26.

Staff noted the difficulties encountered at the monastery, including electrical and plumbing deficiencies, which resulted in the facility having to be closed at least one day in early June.

“The monastery didn’t have the right infrastructure,” Tucson Bishop Edward J. Weisenburger said during a series of media interviews July 8.

The cost of leasing the detention center is only $100 a year, so “the price is right,” the bishop said with a smile. “It feels like it is a tremendous blessing.”

The staff has already begun planning to address the stark inside of the new facility, said Catholic Community Services’ leaders. The bishop added that the volunteers who staff it exude warmth and welcome. “We think we can match the warmth (of the former monastery) and increase it.”

The county board still has to approve the lease, which is scheduled for a vote Aug. 6. Pima County Administrator Chuck Huckelberry said in a July 8 memo that he was recommending it be approved. The space is part of the Pima County Juvenile Court Center complex.

“These facilities are available and are presently vacant due to the aggressive and successful alternatives to detention program and implemented by the Juvenile Court,” Huckelberry wrote. “The county will pay for building, operating and maintenance cost which will include utilities, food service through the juvenile (center’s) kitchen and laundry service through the juvenile (center’s) laundry.”

Part of the detention center is still in use, and the Catholic agency’s shelter facilities will be accessed through a different free-standing entrance that will look less foreboding than a lockdown facility. Signage for the county operation and the Catholic-run area will be clearly marked, church officials said.

She added that the care and welcome provided by the scores of volunteers are what make the monastery a successful stop for the asylum seekers, most of whom are women and families with children. “They will continue to be respectful and warm to our guests.”

Peg Harmon, executive director of the Catholic agency, noted that “the monastery was an empty building when we first moved in,” and staff and volunteers turned it into a livable space.

Cavendish added that she believed once accommodations are made, people will forget that they are entering a former detention facility. “It’s what it was. It’s not what it will be.”

The bishop said that Rulney has agreed to temporarily extend access to the monastery past July 31 until the lease at the detention facility has been approved and operations can be transferred. Rulney has been “extraordinarily generous to us,” he said.

Bishop Weisenburger praised the county for making the site available, noting that with access to the local airport and bus facilities, ample parking for volunteers and its turnkey status, “it checks all of our boxes.”

The bishop also thanked members of the ecumenical community, which had rallied with volunteers to the monastery site and are expected to continue to support the mission at the detention facility. “The community really rallied beautifully around this project,” the bishop said.

Noting the extensive search conducted by county leaders before choosing the detention center, the bishop said, “I don’t know that there was any other facility that will meet our needs as well as this one.”

“We actually feel in some respects, it’s an upgrade.”