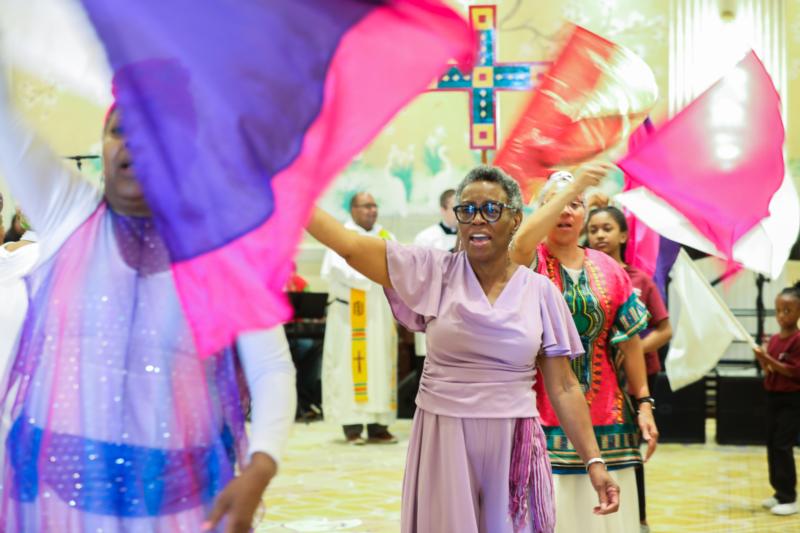 NATIONAL HARBOR, Md. (CNS) — Just before the July 6 closing Mass for the Archbishop Lyke Conference that seeks to enrich liturgies and ministries and promote evangelization at parishes serving Black Catholics, Andrew Lyke reflected on the legacy of his late uncle for whom the conference was named.

Archbishop James P. Lyke, who was a Franciscan, served as a parish priest in Memphis, Tennessee, as an auxiliary bishop in Cleveland and as the archbishop of Atlanta before he died of cancer in 1992.

Eight years earlier, he had coordinated the writing of “What We Have Seen and Heard,” a pastoral letter of the nation’s black bishops, and he also coordinated the African American Catholic hymnal “Lead Me, Guide Me,” published in 1987.

“He was one that loved the liturgy,” Andrew Lyke said in an interview with the Catholic Standard newspaper of the Archdiocese of Washington. “He believed very strongly that when we bring the drama of the Roman liturgy with the passion of black spirituality, it’s just a powerful experience.”

The Archbishop Lyke Conference began in 2004. This year’s conference was held July 2-6 near Washington, in National Harbor and took place in conjunction with the Father Clarence Rivers Music Institute. Father Rivers, a Catholic priest who died in 2004, was a noted composer of liturgical music whose work combined Catholic worship with traditional African American music.

The gathering’s theme was “Every Knee Shall Bend: Reconciliation, Black and Catholic.” Workshops tied that theme into a variety of topics, including Black spirituality and Negro spirituals. Some programs were offered for young adults, music ministers and liturgical dancers.

One of the workshops was titled “Black and Catholic: Our Gift of Blackness to the Whole Church,” and another examined the U.S. bishops’ 2018 pastoral letter against racism, “Open Wide Our Hearts: The Enduring Call to Love.”

Other sessions looked at “Praying Quietly in a LOUD world!” and the sacrament of reconciliation. Workshops also dealt with specific ministries like proclaiming God’s word at Mass.

Andrew Lyke and his wife, Terri, who are members of Sacred Heart Parish in Joliet, Illinois, and are leaders in marriage preparation, education and enrichment, led a session on “Reconciliation at Home: Sacramental Echoes in the Domestic Church.”

“We’re training ministers of liturgy. We’re coming together. We celebrate our roles, and we’re sent off to do our job, just to make worship significant and meaningful and to help communities thrive,” said Richard Cheri, executive director of the Lyke Foundation that supports the operations of the conference.

Cheri, who serves as the director of music and worship at Our Lady Star of the Sea Parish in New Orleans, noted this “is the only conference intentionally focused on ministry to African Americans (in the Catholic Church).”

Challenges that the Catholic Church faces in the black community include “losing people to megachurches … and keeping our youth present, involved and active in the church,” Cheri said.

“Everyone has a chance to share their gift,” said Cheri, who added that people leave the conference “with a sense of what is possible in their ministries.”

At a July 4 morning prayer session at the conference, Father David Jones, pastor of St. Benedict the African Parish in Chicago, said that in a world that struggles for forgiveness, God calls people to reconcile with each other.

“This is a God who is trying to bring us back together again,” said Father Jones. “We need to remember, the work of reconciliation is God’s work.”

Speaking of the sacrament of reconciliation, the priest said God “desires to rid us of our sin … so we can be free to do what God needs done.”

That morning, Ansel Augustine, formerly the director of the Office of Black Catholic Ministries for the Archdiocese of New Orleans, led a workshop on “Finding Jesus in the Midst of Your Paperwork: Reconciling Busyness with Ministry.”

“We need to keep Jesus in the midst of everything we do,” he said.

Augustine said that growing up in New Orleans, he was inspired by the outreach of his parish priest and a Sister of the Holy Family and eventually followed their example and worked with youth in his neighborhood.

“For me, one of the hardest things in youth ministry is having to bury our young people or visit them in jail. You think you’re a failure,” he said, and recalled consoling words spoken to him by his priest mentor who said, “It’s not about you. It’s about what God does through you.”

On July 5, conference participants visited the National Museum of African American History and Culture in Washington, where some of the exhibits highly the central role of faith in the lives of African Americans throughout the nation’s history, including in the struggle for civil rights.

The gathering’s closing Mass July 6 began with a joyous hymn, “This is the Day the Lord has Made,” sung by the conference choir. They clapped and sang as about a dozen liturgical dancers preceded the opening procession.

Welcoming the conference participants, Washington Archbishop Wilton D. Gregory, the main celebrant, said, “No matter where we come from, we belong to the Lord.”

In his homily, Dominican Father Jeffery Ott, who is pastor of Our Lady of Lourdes Parish in Atlanta, said: “We are called to celebrate Christ’s presence with us, in this moment. … That means we are called to be a freed people in Christ, liberated by the saving grace of the Gospel.”

Concluding his homily, the priest said, “As we leave this conference, we are commissioned to go in Christ’s name, to be Christ’s light, to be reconcilers in our work and ministry, to lift up the name of Christ in all we say and do.”

The 2020 Archbishop Lyke Conference will be held June 16-20 at Xavier University in New Orleans.

PREVIOUS: Subduing attacker unusual reaction for deacon but he had to protect abbey