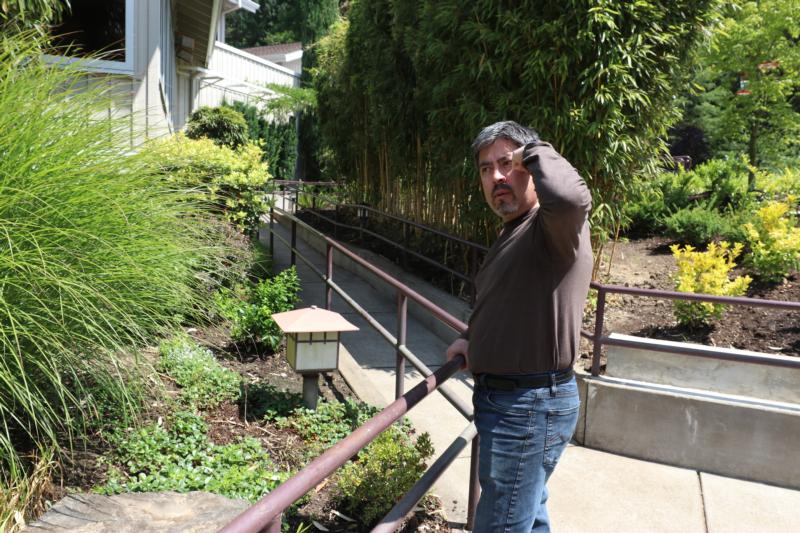 Deacon Jose Montoya, 52, pictured July 8, 2019, points to the spot where he was attacked outside the church at Our Lady of Guadalupe Trappist Abbey near Lafayette, Ore., July 1, by a man who said the devil told him to throw the punch. (CNS photo/Ed Langlois, Catholic Sentinel)

PORTLAND, Ore. (CNS) — Deacon Jose Montoya stares in horror. What if the vicious surprise punch had hit an elderly monk instead of on his own face? Such a blow might have killed a frailer man. And what if the attacker had wielded a knife or a gun?

On the morning of July 1, he was supervising a landscape crew next to the abbey church. He and the workers had noticed a stocky muscular man walk past and into the house of prayer, like dozens of worshippers do every day. But when the visitor came out minutes later, he silently walked behind Deacon Montoya, who turned just as the man threw a hard punch. The fist smashed into the deacon’s left eyebrow and sent him off balance.

The 31-year-old puncher did not run, but stood his ground defiantly. In a natural reaction, the 52-year-old deacon put up his fists to defend himself, even as he asked the silent puncher to explain himself. A fistfight ensued, with the deacon pushing the man to the ground and then falling himself. The attacker leapt to his feet and started kicking the deacon furiously.

When Deacon Montoya got up, the man ran toward an abbey building that guests and monks frequent.

The deacon pursued the man and tackled him among some shrubs. Eventually, the shocked landscapers came to help and held the man down. He thrashed and shouted in Spanish that the devil had told him to throw the punches.

Deacon Montoya kept one hand on the man and used the other to call police. In nine minutes, five Yamhill County Sherriff’s squad cars arrived. Officers identified the intruder as Milton Martinez Carmona, an area resident, who was on probation for leading police on a high-speed chase over a road that was not yet open in 2017. Recently, he broke the windows of his parents’ home with a metal pipe and was convicted of groping female employees at a McDonald’s restaurant.

Carmona, who has a history of not showing up for court appearances, appears to suffer from mental illness and addiction to methamphetamines.

For the abbey attack, Carmona was charged with misdemeanor assault.

“In a way I am glad that I am the one who was attacked,” Deacon Montoya told the Catholic Sentinel, newspaper of the Archdiocese of Portland. “We have so many volunteers, elderly people who come for retreats, elderly monks. What if he had hit one of the brothers, one of the priests? That would be devastating.”

Social media trolls have attacked Deacon Montoya, claiming he should have turned the other cheek as Jesus taught. On the other end of the spectrum, fellow deacons have teased him in a friendly and admiring way, calling him “The Deaconator.”

He takes it all in stride. But he is a gentle man, and his violent, defensive response troubles him even though he knows it was the right thing to do under the circumstances.

“My reaction was different than what I expected as a deacon, as a man of the church,” he said. “I feel like in a way, oh my goodness, I shouldn’t have reacted that way. But it takes over. The adrenaline rush — it just went.”

For the first two nights after the attack, he could not sleep, agonizing over what he did.

Deacon Montoya wants people to know that he had no intention to hurt Carmona, just to subdue him for everyone’s safety. “In reality, my intention was to protect myself and I wanted to stop the threat.”

He has thought a lot about Jesus’ admonition to turn the other cheek. “I know Jesus would do it because he is perfect, but I am not perfect,” he said.

The night of the assault, he settled down as usual with his wife to pray the Liturgy of the Hours. They prayed especially hard for Carmona.

“Deacon Jose’s quick thinking and strong response to bring a dangerous situation safely to a close may well have protected others who were at the abbey,” said Deacon Brian Diehm, director of the Office for the Diaconate at the Archdiocese of Portland.

The July 1 assault is the latest in a two-year string of incidents at the abbey, 2.5 miles north of Highway 99. Transients have sought to live in the parking lot, one in a stolen rental truck, and mentally ill people have wandered into the church. One vandal entered a confessional and marked the walls and a Bible with graffiti accusing the pope and the monks of being pedophiles.

The monks have a keen sense of hospitality and don’t make much fuss about the troubles. They leave their 1,300-acre grounds open to hikers, as many as 50 per day. But Deacon Montoya said that some visitors lack respect, leaving garbage and failing to clean up after their dogs. Poachers have hunted on the land, with some gunmen shooting signs.

Conversations are underway at the abbey about better security, with the July 1 attack providing urgency to the topic.