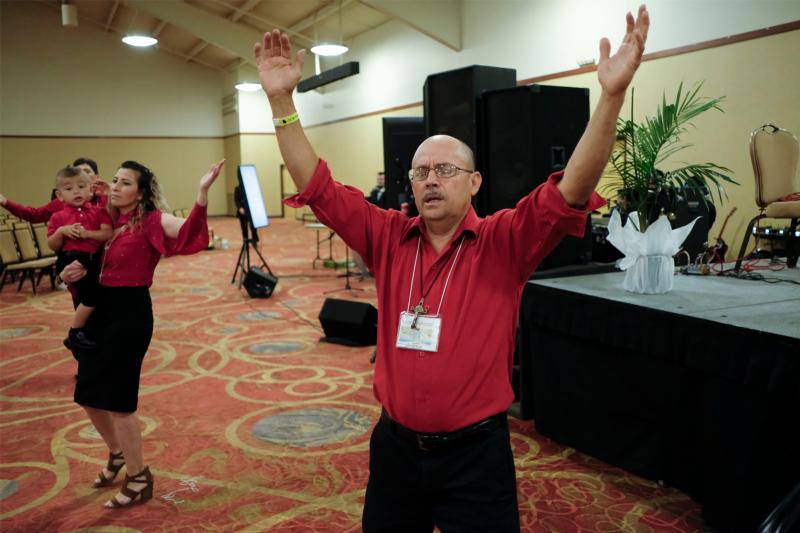 People pray July 13, 2019, during the 15th Annual Hispanic Charismatic Congress in South Sioux City, Neb. Despite news reports that Immigration and Customs Enforcement agents would arrest several thousand immigrants in the country without documents July 13, attendance was not impacted at the event sponsored by the Diocese of Sioux City, Iowa. (CNS photo/Jerry Mennenga)

SOUTH SIOUX CITY, Neb. (CNS) — Despite news reports that Immigration and Customs Enforcement agents would arrest several thousand immigrants in the country without documents July 13, attendance was not impacted at the charismatic congress sponsored by the Diocese of Sioux City, Iowa.

“I heard one person mention it,” Adrian Paz of Denison, Iowa, one of the organizers, said as the July 13-14 congress opened. “I chose to not listen, and it appears we will have a good turnout, probably around 600 and 700, between the two days.”

The 15th Annual Hispanic Charismatic Congress was held in South Sioux City, which is directly across the Missouri River from Sioux City, Iowa. The theme was “The History of Salvation is Jesus Christ.”

Father Brad Pelzel, vicar general of the Diocese of Sioux City, was the principal celebrant of the opening Mass July 13. Concelebrating were Father Jeremy Wind of Cathedral of the Epiphany in Sioux City; Father Jose Luis Mejia Lopez of Our Lady of Guadalupe Parish in Matalan, in the Mexican state of Jalisco; and Father Jorge Espinoza Jimenez, of Our Lady of Guadalupe Parish in Tlaquepaque, which also is in Jalisco.

Bishop R. Walker Nickless of Sioux City traditionally serves as principal celebrant of the Mass, but he was in Omaha, Nebraska, participating in the 25th anniversary event for the Institute for Priestly Formation. Father Pelzel sent greetings to those in attendance at the congress from Bishop Nickless.

In his homily in Spanish, Father Jose focused on the first reading, the story of Jacob and Joseph and the brothers who betrayed him.

“Father Jose brought a message of forgiveness in his homily,” Father Wind explained.

In the first reading from Genesis, Joseph finds it in his heart to forgive his brothers of the “crime that we, the servants of your father’s God, committed.”

“Father Jose pointed out what every sinner needs is to be sorry, but also the importance of forgiveness, as Joseph did his brothers,” Father Wind said.

Through Father Wind as interpreter, Father Jose explained the importance of the Hispanic Charismatic Congress.

“A congress like this allows us to meditate on the word of God,” Father Jose said. “It allows God to settle in our hearts and helps us change things that are not good in our lives. It feeds the spirit and allows us to grow in our faith.”

Father Wind also served as interpreter for Father Jorge on the theme of the congress that emphasized that salvation can only be found through Christ Jesus.

“An event like this helps us grow in our faith and grow in God,” Father Jorge said. “To know God is to love God and that’s why this congress is important. It allows us to meet God.”

In addition to Mass, the opportunity for the sacrament of reconciliation and various speakers throughout the two days, the South Sioux City event featured Pablo Castro, a Catholic singer, who was born in the Dominican Republic. He has recorded 20 songs of praise and worship.

Providing music during the Mass was Grupo Propecia of Sioux City, musicians who participate in music at the Cathedral of the Epiphany, who also offer their talents at weddings and retreats.

“We’ve been together at least three years,” said Guillermo Sebastian, the drummer with the group.

“Our goal is to take the message of God and play it through our music,” he said.

Aida “Lucy” Flores of Sioux City was the lector for the Mass; she confessed it was her first time.

“I don’t know why I said yes,” she laughed. “I was nervous up there and worried I would miss a word or say something wrong.”

Flores felt the reading about Joseph and his brothers was essential in reiterating the theme of the congress.

“Joseph forgave his brothers. Jesus forgives us. It is that love that shows we should do that,” she told The Catholic Globe, newspaper of the Diocese of Sioux City. “It’s clear how God had a plan for his people through Joseph and Jesus and that’s how we should live our lives, as followers of Jesus.”