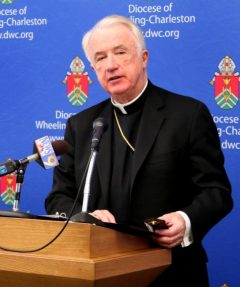 WASHINGTON (CNS) — The Office of the West Virginia Attorney said sanctions announced July 19 by the Vatican against the former head of the Diocese of Wheeling-Charleston, West Virginia, are a “first step” but demanded further disclosure of the investigation of now-retired Bishop Michael J. Bransfield.

“The allegations against former Bishop Bransfield have caught the attention of nearly everyone in the Catholic faith, including the pope himself, who has now given disciplinary measures for Bransfield,” said the state’s Attorney General Patrick Morrisey in a July 19 statement.

He was referring to the sanctions from Pope Francis that Bishop Bransfield can no longer reside in the Diocese of Wheeling-Charleston, nor participate “anywhere in any public celebration of the liturgy” and that he has an obligation to make amends for “some of the harm he caused.”

The sanctions were released in a July 19 statement and referenced a “preliminary investigation into allegations of sexual harassment of adults and of financial improprieties” by Bishop Bransfield.

Morrisey, however, said more needs to be made public.

“It is just that — only one step — since the public cannot know the full extent of harm caused by Bransfield’s actions until the diocese fully complies with our subpoena and releases the full Bransfield report,” he said in the statement, adding that “it is time for the diocese to come clean with what it knows and release the Bransfield report and any other relevant materials.”

When the pope accepted Bishop Bransfield’s resignation in September 2018, he left under a cloud of allegations of sexual and financial misconduct and, in early July, details became public. He turned 75 Sept. 8, 2018, the age at which canon law requires bishops to turn in their resignation to the pope, though they are not always asked to immediately to step down.

The Washington Post newspaper in an article said U.S. and Vatican officials had for years received correspondence from parishioners and others concerned with excessive spending by Bishop Bransfield as head of Wheeling-Charleston, which covers West Virginia, one of the poorest states in the country. The newspaper story said Bransfield spent more than $4.6 million on the bishop’s residence, $2.4 million on travel and $350,000 on financial gifts to other churchmen, including some who later investigated him.

In March, Baltimore Archbishop William E. Lori, who was appointed as apostolic administrator of the statewide diocese after Bishop Bransfield stepped down, announced that a preliminary report by the investigators had been sent to the Vatican; he also announced restrictions on the bishop’s ministry.

In June, Archbishop Lori announced that a group of lay investigators concluded the claims of excessive and inappropriate spending, along with accusations of sexual misconduct by Bransfield toward adults, were “credible.”

NEXT: Congress ‘allows God to settle in our hearts,’ priest tells attendees