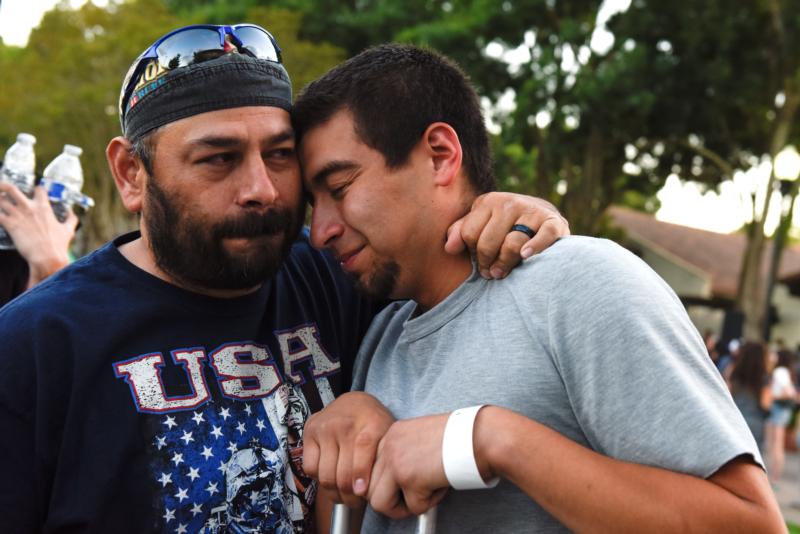 Justin Bates, right, a survivor of the Gilroy Garlic Festival mass shooting, is comforted by his father, Rob Bates, during a candlelight vigil outside Gilroy City Hall in California July 29, 2019. The event honored those that died and were injured during the shooting a day earlier. The Diocese of San Jose held a bilingual prayer vigil July 29 for victims, survivors and first responders at St. Mary Church in Gilroy in response to the shooting that claimed three lives and injured 12 others. (CNS photo/Kate Munsch, Reuters)

GILROY, Calif. (CNS) — Hundreds gathered late July 29 at St. Mary’s Church for a bilingual prayer service, invited by Gilroy’s Catholic community “to come together and pray for all those affected by the senseless tragedy.”

A day earlier, a gunman, later identified as 19-year-old Santino William Legan, fired on the crowd attending the final day of the Gilroy Garlic Festival. Three were killed — a 6-year-old boy, a 13-year-old girl and a man in his 20s — and 12 others were injured. Police quickly shot and killed the gunman.

As community members entered the Catholic church, the Los Angeles Times reported, Father Michael Hendrickson, the pastor, stood outside to greet them. The evening was about prayer, he told the daily newspaper: “A prayer for the living and a prayer for the dead.”

Hundreds more gathered outside Gilroy’s City Hall the same evening for the same reason, to remember the shooting victims — those who died, those who were injured by survived and their families — and also to express gratitude to the first responders.

“Our hearts are heavy with sadness in the wake of the horrific shooting that claimed the lives of at least three innocent victims and injured several others at the Gilroy Garlic Festival,” San Jose Bishop Oscar Cantu said in a statement July 29. “I am grateful for the first responders and individual citizens whose quick thinking and professional actions saved countless lives.”

“My thoughts and prayers are with the victims, survivors and their families in this time of sorrow,” Bishop Cantu said. “May God, the source of our faith and strength, grant comfort and hope to all those affected by acts of violence.

“May grief give way to healing and grace, as we work together to protect the innocent and prevent future massacres, so that peace may prevail in our hearts and communities,” he added.

The three who were killed were identified as Stephen Romero, 6; Keyla Salazar, 13, and Trevor Irby, who the police said was in his 20s.

In a July 30 statement, the chairman of the U.S. bishops’ Committee on Domestic Justice and Human Development said that “as Americans, we must be honest with ourselves that we have a sickness, almost a plague, with the problem of gun violence.”

“The Lord calls us to comfort those who mourn and to be peacemakers in a violent world,” said Bishop Frank J. Dewane of Venice, Florida. “We pray, and we must, for the victims and their families. The church should act in ways that heal and support all those affected by gun violence.”

But he also called it “disturbing that that our society would seem to allow some to feel comfort in being violent. Our legislators must make changes to our gun policy to prevent the loss of life.”

“As Christians, we must look to the cross, repentant of the ways that have led us to this point and, with God’s grace, abandon such senseless, inhuman acts,” Bishop Dewane said. “Let us resolve to make the sacrifices necessary to end the violent killing that saturates our nation.”

In Gilroy, Police Chief Scot Smithee said investigators had not found motive yet for the shooting.

“Any time a life is lost, it’s a tragedy,” he said at a morning news conference July 29. “But when it’s young people, it’s even worse. It’s very difficult.”

Gilroy is about 80 miles southeast of San Francisco. It is considered the “garlic capital of the world.” The festival goes over three days, features food, cooking competitions and music, and draws more than 100,000 people.