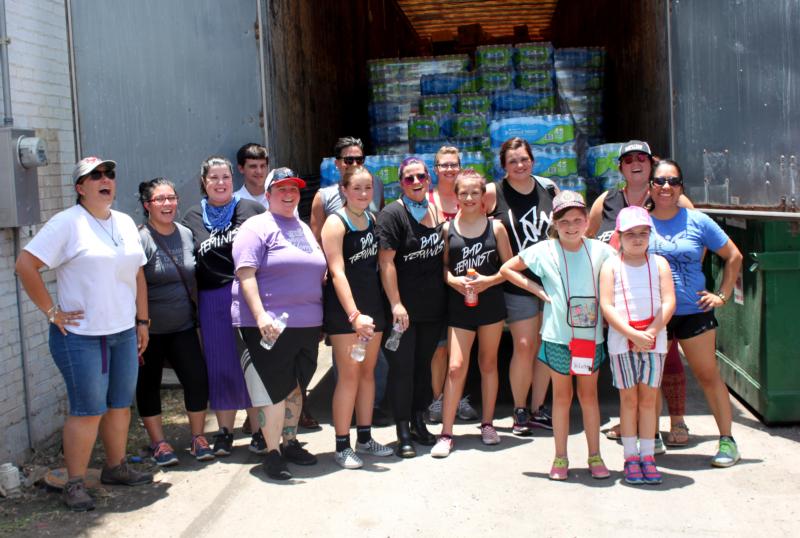 Members of the pro-life groups And Then There Were None and New Wave Feminists stand in front of a truck of supplies for migrants in need in this undated photo. The two groups partnered to organize the #Bottles2TheBorder campaign, which raised $205,000 worth of funds and supplies to donate to immigrant respite centers in Texas. (CNS photo/courtesy Abby’s ministry)

WASHINGTON (CNS) — Shoelaces, rosaries, diapers, shampoo, Chapstick, baby wipes, water. Basic things that affirm one’s humanity. These are the items that the #Bottles2TheBorder campaign fought to provide for immigrant mothers and their babies as they crossed into America.

New Wave Feminists and Abby Johnson’s And Then There Were None organization, along with 50 other pro-life groups, sponsored #Bottles2TheBorder. Together, they took more than $133,000 in supplies and $72,000 in funds to respite centers on the Texas-Mexico border.

This is the second trip New Wave Feminist has made to the border in the past year. The feminist pro-life group subscribes to a whole life ethic that seeks to preserve dignity at all stages of life, not just in the womb. Last December, they organized a similar initiative, delivering $10,000 to the McAllen, Texas, respite center.

“You have people fleeing for their lives. And the desperation, you can see it on their face. They just want to get their families to safety, and, as someone who works in the pro life realm, I can recognize that desperation,” said Destiny Herndon-De La Rosa, founder of New Wave Feminists, in an interview with Catholic News Service.

Herndon-De La Rosa and Johnson, a Planned Parenthood worker turned pro-life advocate and founder of And Then There Were None, led a group of 30 women to the border.

Roasting in 110-degree heat, they unloaded over 27,000 pounds of bottled water and other supplies from an 18-wheeler and onto the conveyor belt that would carry them into the Catholic Charities respite center in McAllen. The women distributed the remaining supplies to other respite houses in Texas.

These facilities are all respite houses for legal immigrants who have been approved and released from processing. They provide immigrants with a night or two of shelter, food, a hot shower and travel instructions to wherever they are going.

Both Johnson and Herndon-De La Rosa said that they would have donated supplies to immigrants in the country illegally who are at government detention centers if the centers accepted private donations.

“I don’t think that any one of us should support lawlessness, and I think that there should be a process for immigrating into the country, but I think that we also need to recognize that there are people here who need our help right now, even at the detention centers,” Johnson told CNS. “Just because someone has done something criminal doesn’t mean that their basic human rights should be ignored.”

Apparently, the attitude is catching among pro-lifers. Within two days of opening up an Amazon gift registry for baby item donations, the registry sold out. Herndon-De La Rosa said they would have had to halt donations because they ran out of space to transfer them, but that day a truck driver offered up his 18-wheeler for the project. They reopened the registry, and within two weeks had collected the whole $205,000.

According to Herndon-De La Rosa, 100% of the money went straight to helping immigrant families.

“These people are going to be members of our community, and if they are traumatized and feel less than or unwanted it can be difficult for them to assimilate,” Herndon-De La Rosa said. “It is important for volunteers to go and welcome them and show them that we see their dignity and that we want them here.”

Both Johnson and Herndon-De La Rosa agreed that in this situation people come before politics.

“I get tired of people calling other people illegal. It really strips away their humanity, and can be disheartening at times,” Johnson said. “I think absolutely we have a crisis; our detainment centers are overrun and we don’t have the facilities to properly care for people coming here. We have to figure out a solution and for those who are here. We do have a responsibility to care for their basic needs.”