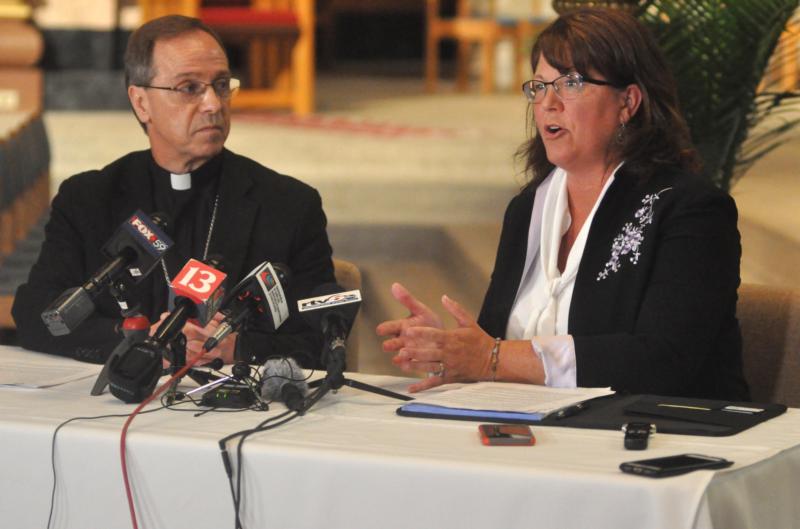 Indianapolis Archbishop Charles C. Thompson looks on as Gina Fleming, superintendent of Catholic schools for the Archdiocese of Indianapolis, speaks during a news conference at SS. Peter and Paul Cathedral in Indianapolis June 27, 2019. (CNS photo/Sean Gallagher, The Criterion)

INDIANAPOLIS (CNS) — Noting that he tries to be “Christ-centered” in every decision he makes, Archbishop Charles C. Thompson of Indianapolis stressed two major points as he met with reporters June 27.

The news gathering was held to discuss the recent choices made by Cathedral High School and Brebeuf Jesuit Preparatory School concerning expectations of teachers, guidance counselors, administrators and other leaders in Catholic schools.

Both choices by the two Indianapolis private schools involved teachers in same-sex marriages.

The schools’ choices were made in relation to the archdiocese’s requirement that all Catholic schools must state in their contracts that these “ministerial witnesses” must “convey and be supportive of all teachings of the Catholic Church,” including its teaching on the “dignity of marriage as one man and one woman.”

Making his first point, the archbishop said, “I should tell you, I’m from a big family. I’ve got dear family members, dear friends with same-sex attraction. So it’s as personal to me as it is to anyone. And they know I love them unconditionally. And they know I respect their dignity as a person.”

The second point focused on the Catholic Church’s teaching on marriage.

While stressing that “one’s (sexual) orientation is not a sin,” the archbishop said the issue involving the two schools “is about public witness of church teaching on the dignity of marriage as one man and one woman. That is our church teaching.

“In this particular case we’re dealing with, those are ministers in our church. Teachers, guidance counselors, other leaders, leaders of the schools and other leaders in the archdiocese are bound to live out these principles,” added the archbishop, who was joined at the news gathering by Gina Fleming, the archdiocese’s superintendent of Catholic schools.

On June 20, Brebeuf announced its decision to continue the employment of a teacher in a same-sex marriage — a choice that resulted in the archdiocese no longer considering the school as Catholic.

On June 23, Cathedral announced that it had rescinded the contract of a teacher in a same-sex marriage because of the contract’s morality clause.

The archbishop noted that in both situations involving the teachers, the archdiocese only responded when the situations were brought to its attention.

According to CNN, the two high school employees had been married to each other since 2017. Their marriage, which the couple shared on social media, led a local Catholic to complain to the archdiocese, sources told the news network.

“This is not a witch hunt. We don’t go looking for these situations,” Archbishop Thompson told the reporters. “When they’re brought to my attention though, it is my responsibility, my duty to oversee the living of the faith, especially of all ministerial witnesses.

“Our first desire is how do we help reconcile the person’s situation with the church’s teaching. When it comes to us that there’s a public situation that’s contrary to the church’s teaching, that’s when we address it,” Archbishop Thompson continued. “We’re trying to address how to reconcile it in order to go forward. There come moments however when you can only accompany people so far before some sad, hard decisions have to be made.”

The archbishop was joined at the meeting with reporters inside SS. Peter and Paul Cathedral by Gina Fleming, the archdiocesan superintendent of Catholic schools.

Below are some of the major points made by Archbishop Thompson and Fleming.

The influence of Pope Francis

“I’d like to point out that Pope Francis uses that wonderful word, ‘accompaniment.’ He’s given us some wonderful images to work with, and it’s the wonderful tone of the church. But we have to understand accompaniment. Accompaniment implies movement. Pope Francis says you meet people where they are, but we don’t leave them there. We have to accompany them.

“We walk them more fully toward Christ. But I think sometimes people hear accompaniment as, ‘meet people where they are, and just accept them right there.’ We’re called to do more than that. Our society places great emphasis on tolerance. It’s kind of like, ‘live and let live.’ But Jesus calls us to more than tolerance. Jesus calls us to love. And love is sacrificial.

“Jesus says we have to sacrifice our own lives, sacrifice our own well-being for the sake of the Gospel. So our goal is how do we lead people to Christ as best we can. These are difficult times. We’re navigating through some very challenging times for our church and for our society.”

“First and foremost, it is my responsibility as archbishop to oversee Catholic identity throughout the archdiocese, of any entity. We engaged in a rather long relationship trying to accompany the schools toward reconciliation with these principles — especially this public witness of ministerial witnesses. Job descriptions for our teachers, for our guidance counselors. That process has been going on for two years.”

Fleming: “When someone is not living according to Church teaching, we do try to walk with them. We try to give them the information that they need in terms of the church teaching, and then also spiritual guidance and direction, as well as opportunities to rectify their personal situation.”

“I believe he does. Over the process of all this, I don’t do this without a great deal of prayer, discernment, dialogue, seeking consultation. And not just consultation within the archdiocese but much broader than that. I love Pope Francis. The Holy Father has spoken some wonderful, beautiful words about accompaniment, dialogue, encounter, acceptance, but he hasn’t changed the teachings on marriage. He hasn’t changed one aspect of church teaching on marriage.”

The basis of his decisions

Regarding “ministerial language” in church contracts

“It was actually four years ago under Archbishop (Joseph W.) Tobin when the ministerial language in contracts were first implemented in their current format.”

“This language was intended for two purposes. One was to first affirm the role of ministers of the faith as vital ministers in church ministry. And the other was to ensure that we all had a common or shared language around our roles and responsibilities. So that was implemented in our archdiocesan schools four years ago.”

“It was through much prayerful discernment over the course of that two years, and really, much conversation on what it truly means to be ministers of the faith and how we would uphold that in our Catholic schools that led to the schools to make their own decisions as to whether they would wish to retain that Catholic identity.”

Help for students with same-sex attraction

“We know that we have students in our schools today who are struggling with their sexual identity, who are experiencing questions around their own sexual identity. We are doing research, we are holding conferences for teachers and school leaders to ensure that they understand what it means to walk beside these young people and to be there for them.”

“We are dealing with that. In fact, the school has already had a conversation with an individual, and to my understanding there’s a choice to walk that path of accompaniment as well that has been accepted.

“That’s our responsibility as ministers of the faith to accompany. We owe it to employees to walk beside them, and we take that role very seriously.”

Editor’s Note: A video of the news conference can be found on the Indianapolis Archdiocese’s website. The archdiocese also posted an FAQ on some key facts about Catholic Church teaching about marriage, Catholic education and other issues here.

Shaughnessy is assistant editor and Hoefer is a reporter at The Criterion, newspaper of the Archdiocese of Indianapolis.

PREVIOUS: Supreme Court to take up DACA case, not abortion law, next term

NEXT: Bishop helps migrant family at border cross into U.S. on asylum trek