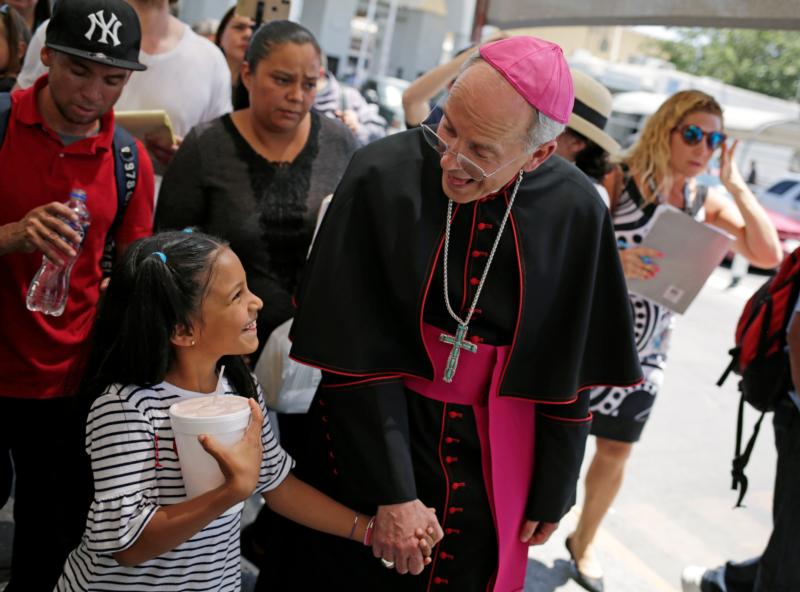 Bishop Mark J. Seitz of El Paso, Texas, shares a smile with a Honduran girl, Cesia, as he walks and prays with a group of migrants at the Lerdo International Bridge in El Paso June 27, 2019. The migrants were seeking asylum in the U.S. (CNS photo/Jose Luis Gonzalez, Reuters)

Under current policy, migrants seeking asylum must stay on the other side of the border while their claims are heard, a provision of the “Remain in Mexico” program instituted by the Trump administration this year.

“There are supposed to be exceptions that are not being respected,” said Bishop Seitz, who spoke with immigration officials about allowing the family to enter.

One of the migrants the border bishop accompanied has a cognitive disability and another suffers from a heart problem, news agency Reuters reported June 27. It’s unclear how many people were able to enter. For the moment, the family is being held at a facility on the U.S. side of the border while their claim is processed, said a video released by the Diocese of El Paso after the event.

Dylan Corbett, executive director of the Hope Border Institute, which helped coordinate the effort, said on June 27 that the family is supposed to remain under custody at least one night.

“We, their lawyers, nobody is able to contact them, we’re going to be out of communication,” Corbett said in the video. “So, it’s fingers crossed. They’re in. They’re in the United States. They’re at least safe tonight. We hope that continues.”

Along with other U.S. prelates, Bishop Seitz has argued that the policy forcing asylum-seekers and others to stay in the Mexican border towns while waiting for their cases to be processed exposes them to danger. Before crossing the bridge, the bishop spoke with a group of people who had not been able to enter. The video shows a man who introduces himself to Bishop Seitz from among the crowd and tells him he’s Cuban and was in detention for a month — in Mexico — and not allowed to shower.

“Pray for us,” the man asked him after showing the bishop a black eye and telling him that he was robbed and beaten after being released in Mexico. The bishop then gave him a blessing.

The video later shows a relieved Bishop Seitz after the family he accompanied was allowed into the U.S.

“Right now, I’m just so very grateful to God,” he said. “These days, when so many things can seem to work against those who are seeking refuge in our country, today something went well. Today, somebody listened, and they were able to pass through. They will be able to go through their asylum process here in the in the United States with loved ones in safety and security. We’re so grateful for that.”

Earlier in the day, he had called attention toward anti-immigrant attitudes in the United States and the dangers that have resulted and the loss of lives, particularly of children along the border. Bishop Seitz walked the bridge and also prayed with migrants and other Catholics on the other side of the border.

“These people we accompanied today have suffered more than any of us us can imagine in their short lifetimes and now they can experience at least a moment of peace,” he said.