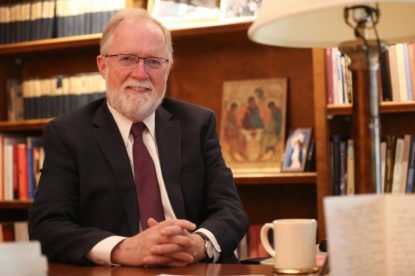 Michael Naughton, pictured in a July 25, 2019, photo, hopes to help business leaders apply faith to the marketplace with a 30-page reflection titled “Vocation of the Business Leader.” He worked on the guide with a team at the Center for Catholic Studies at the University of St. Thomas, Minnesota in St. Paul, Minn., where he serves as director. (CNS photo/Catholic Spirit)

ST. PAUL, Minn. (CNS) — A guidebook for business leaders that was developed largely by Minnesota Catholics and released as an official Vatican document in 2012 made a splash around the world but has remained largely unknown in the Archdiocese of St. Paul and Minneapolis.

Seven years later, its proponents say it is more relevant than ever, and one of its developers plans to start spreading the word about it with a class this fall at his parish.

A small team at the University of St. Thomas’ Center for Catholic Studies in St. Paul took the lead in developing the groundbreaking 30-page reflection titled “Vocation of the Business Leader.” It marked the first time that the Catholic Church affirmed business as a vocation citing its role in providing for the common good and promoting human dignity — a stark contrast to the mercenary nature of business often implied by theologians.

The document is broken into 87 short sections — many a single paragraph — and concludes with reflection questions. The introduction lays out a central premise: “Obstacles to serving the common good come in many forms — corruption, absence of rule of law, tendencies toward greed, poor stewardship of resources — but the most significant for a business leader on a personal level is leading a divided life. This split between faith and daily business practice can lead to imbalances and misplaced devotion to worldly success.”

The document was born of a 2011 seminar held at the Pontifical Council for Justice and Peace in Rome in collaboration with University of St. Thomas’ Center for Catholic Studies. There, business leaders and professors from a range of disciplines attempted to interpret Pope Benedict XVI’s 2009 encyclical “Caritas in Veritate” (“Charity in Truth”) for the marketplace.

“There was some puzzlement about: What does that mean for business?” said Michael Naughton, director of the Center for Catholic Studies at the University of St. Thomas.

The seminar was so fruitful that he proposed to Cardinal Peter Turkson, head of the Dicastery for Promoting Integral Human Development, that they create a follow-up “handbook” for faith-based business leaders.

This began an intensive year of collaboration and conference calls. Naughton, the father of five rose early, poring over extensive notes, conflicting opinions and copious coffee to develop the document in the office of his St. Paul home, sharing early drafts with his wife and students.

“I certainly think the Holy Spirit was there,” said Naughton, a member of Holy Spirit Parish in St. Paul.

His education — a doctorate in theology and a master’s in business administration — equipped him to steer the drafting committee and his collaborators said they came to appreciate his critical thinking and diplomatic touch.

“Mike did a remarkable job of shepherding this whole thing through,” said Robert Kennedy, a Catholic studies professor who contributed to the document. “He can move something forward without alienating people.”

One contributor who helped keep the document practical for busy executives was Pierre Lecocq, a Catholic father in Paris who had served as CEO of a large European printing service supplier.

Power can corrupt, Lecocq said. “It’s a drug — running fast, making decisions every day. You have to step back and say: ‘Hey, wait a minute. Am doing this because I really have to, or because I love doing it?'”

Being a Catholic business leader does not mean you will never fire employees, Lecocq said. Rather, it means you approach it with as much sensitivity as possible, being transparent about workplace changes so a lay-off does not come as a complete surprise and then helping that person find new work.

Naughton synthesized all these thoughts into a reflection that challenges business leaders to create goods that are good and services that truly serve. It also calls for subsidiarity to enable employees to exercise their gifts and feel empowered as “co-entrepreneurs.”

“Vocation of the Business Leader” was widely promoted, translated into 15 languages and embraced throughout parts of Asia, Africa, Europe and South America. It also generated four new editions.

The latest edition, spearheaded by Naughton and released in March, incorporates insights from Pope Francis on sustainability and the technology.

The document has had a profound impact. Pope Francis has referred to it on multiple occasions. The International Christian Union of Business Executives disseminated it through its far-flung chapters. And it inspired local Catholics at the Catholic Rural Life office in St. Paul to write “Vocation of the Agricultural Leader,” a reflection published in 2016 by the International Catholic Rural Association in Rome.

And yet, for its remarkable reach, “Vocation of the Business Leader” remains relatively unknown in the archdiocese where it was born.

“Oddly enough, this document hasn’t had the impact in the United States that it’s had in other parts of the world,” Kennedy told The Catholic Spirit, archdiocesan newspaper of St. Paul and Minneapolis. “I’ve been really surprised that it’s had almost no attention in this archdiocese. That’s partly our fault. We’ve been busy and haven’t had the chance to work hard to encourage parishes to do programs or encourage other events in the archdiocese.”

Rich Chapman, a member of Our Lady of Grace Parish in Edina and managing director at Chartwell Financial Advisory in Minneapolis, said he learned about “Vocation of the Business Leader” when Naughton showed him a draft.

“I think this document has been under-utilized,” Chapman said. “Why don’t we have it in the hands of every Catholic business leader and create a venue to discuss and grow? The document is a hidden gem.”

He said when business leaders see their work as a vocation, they are inspired to provide servant leadership and, ultimately, evangelize the workplace.

Naughton said the document reminds people that they have been called and there is a dignity to that call. “Our achievements and our money and our rewards are all going to betray us,” he said. “They’re nice to have, but they’re not the place we want to locate our meaning.”

Editor’s Note: The document “Vocation of the Business Leader: A Reflection” can be found online here.

Capecchi writes for The Catholic Spirit, newspaper of the Archdiocese of St. Paul and Minneapolis.