No executions, but 70 killings over blasphemy law, says rights activist 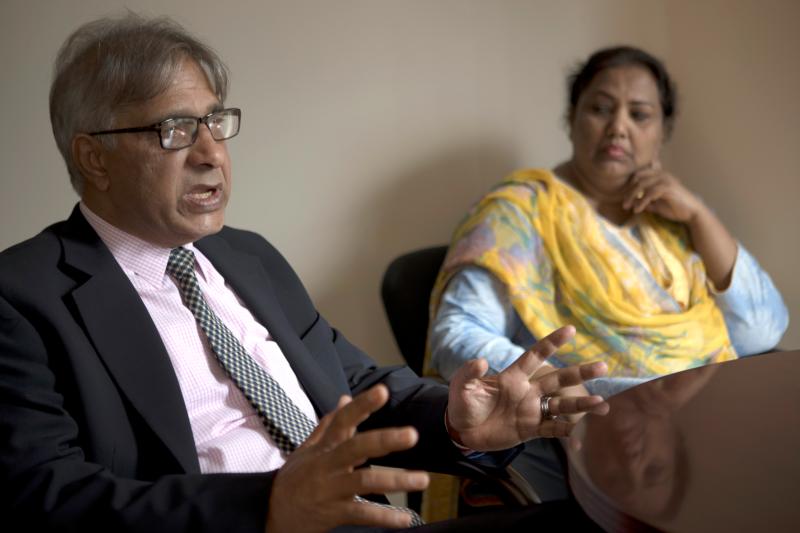 Peter Jacob, executive director of the Center for Social Justice based in Lahore, Pakistan, gestures during an interview with a Catholic News Service reporter in Washington July 18, 2019. Looking on is Rubina Feroze Bhatti of Pakistan, a founding member and current general secretary of Taangh Wasaib Organization, a rights-based development group. (CNS photo/Bob Roller)

WASHINGTON (CNS) — Despite the blasphemy law that has roiled Christians in Pakistan, the government has not executed anyone found guilty at trial.

However, 70 people accused of blasphemy have been murdered in extrajudicial actions by mobs, said Peter Jacob, executive director of the Center for Social Justice based in Lahore, Pakistan.

“The lethality of the law is not only tested by the law but by the people,” Jacob said during a mid-July interview with Catholic News Service.

Jacob was in Washington to attend the U.S. State Department’s Ministerial to Advance Religious Freedom, as was Rubina Feroze Bhatti, a founding member and current general secretary of Taangh Wasaib Organization. The organization is a rights-based development group working for interfaith harmony and gender equality in addressing religious intolerance, sectarianism and discriminatory laws against women and minorities.

Christians fear both the loss of their livelihood and displacement because the Pakistani law is “vague” on what constitutes an insult to Islam or Muhammad, its founder, Jacob said.

“There is this tremendous struggle to have this law either amended or the effect of the law to be neutralized by parallel legislation introducing safeguards to abuse,” he added.

Jacob cited what he called “the Gojra incident” in 2009, in which six Christians were burned alive, 140 houses were destroyed, and hundreds of Christians displaced by mobs after an insult to Muhammad was perceived. “After this incident a judicial inquiry was carried out in addition to the normal inquiry. This inquiry brought about 10 recommendations which have not been heeded. Successive governments have not heeded the results of these recommendations,” he said.

“There should be an implementation of a judicial inquiry which is independent and carried out by a high-court judge,” said Jacob, who for 26 years prior to his service with the Center for Social Justice was involved with the Pakistani Catholic bishops’ National Commission for Justice and Peace.

Bhatti spoke of harassment by the Pakistani government, which at one point shut down her organization.

“There were five organizations banned by the government, and four of them were headed by the females,” she said. “Being a minority woman, we have to climb two mountains of discrimination and disparity, as a woman and a minority.”

Taangh Wasaib was later unbanned, but “we have some restrictions,” Bhatti told CNS. “We are restricted in our work, our area of operation, we can’t operate in certain districts. We focus more on livelihood projects and climate change. But if we need to work on advocacy, we have to be part of bigger networks.”

Jacob alluded to “a period of struggling, of surveillance. The government of Pakistan has become very conscious of the presence of NGOs and INGOs (international nongovernmental organizations). CRS (Catholic Relief Services) has been closed, Caritas Ireland, they have been closed, they have not been allowed to operate in Islamabad.”

Christian leaders in Pakistan “asserted and insisted on equal rights of assembly, association, all civil rights,” Jacob added. “Now I would say it’s a flicker of hope (that) exists in the fact that, due to this resistance, now the government Is considering allowance” for CRS to operate. “They’re applying again.”

Bhatti outlined a preferred future for both the short and long term for religious minorities in Pakistan.

“Our struggle is that we are working for equal opportunities and equal rights for all citizens of Pakistan without any discrimination, without any fear, without any insecurity,” she said. “Our approach is two-pronged. We start with basic and strategic needs, particularly focused in on minority rights. I’m in the church, even the faith-based organizations, they focus more on basic needs like education, employment, livelihood, health.

“For if we leave it to equal status, we need to focus more on creating a system where minorities in general, and minority women particularly, can take part in decision-making in the grassroots and the national level as well.”

She added, “We need our institutions back, but we need the presence of religious minorities in all structures, public structures, public institutions and the like. Now we have very few women — one senator and one female member in the National Assembly. It’s good to, I’ll say, showcase that kind of thing. It’s kind of cosmetic.”

Bhatti said, “Maybe it’s a baby step, but we need to adopt a systematic approach.” She said she and Jacob were “establishing a leadership school educating the political workers for all the political parties. … integrating them with the mainstream political structures. They will come up with a vision for the strategies and understanding of the context.”