Plan to change how inflation is measured concerns advocates for poor 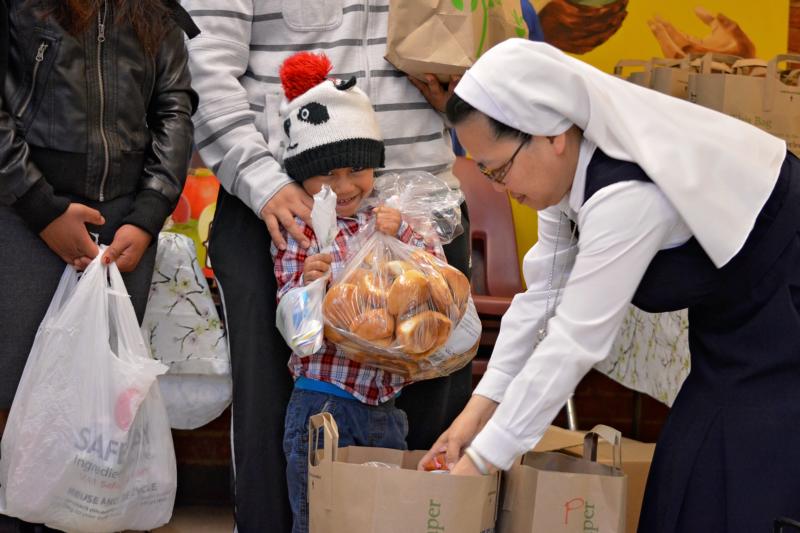 A religious sister provides food to a needy family at a Catholic Charities program. The Trump administration is weighing a plan that uses a different definition of inflation to determine who lives in poverty and who does not. (CNS photo/Elias Kontogiannis, courtesy Catholic Charities USA)

WASHINGTON (CNS) — The Trump administration is weighing a plan that uses a different definition of inflation to determine who lives in poverty and who does not.

The plan, floated in the spring, has raised concerns among Catholic advocates for low-income and working families. They said that hundreds of thousands of people would no longer be eligible to receive assistance under federal programs if it is adopted.

If implemented, the measure would affect people’s eligibility for food stamps, Head Start, school lunch programs, parts of Medicaid and Medicare, the Children’s Health Insurance Program and other federal programs.

“Our main concern is that if you change the way you calculate the poverty measure it doesn’t make people less poor,” said Julie Bodnar, a policy adviser in the Office of Domestic Social Development at the U.S. Conference of Catholic Bishops. “Just because you change how you’re calculating this measure and who is eligible for these services doesn’t mean people don’t need these services.”

Bodnar helped draft a joint letter from the USCCB, Catholic Charities USA and the National Council of the United States Society of St. Vincent de Paul to the Office of Management and Budget at the White House, which proposed the plan. The Catholic Health Association also weighed in. Agency comments reflected deep concern for the people who would lose benefits and be forced to turn elsewhere for assistance.

The change is technical in nature and is the kind that policy wonks love to dissect.

Currently, the Official Poverty Measure used by the U.S. Census Bureau is rooted in the Consumer Price Index. It measures the price of a fixed set of goods. The OMB instead wants to use what is known as chained Consumer Price Index, which rises more slowly than the CPI because it tries to factor in cheaper options as prices change.

The OMB said the change is being sought for the sake of accuracy.

However, the Catholic representatives argued that using the chained CPI would be less accurate and would bring harm to thousands of families over the next decade.

“The major concern is that poor and vulnerable persons and families are going to be hurt by this (change) … because they’ll lose key federal assistance that families still need. What it does to the lower income people, it disproportionately impacts them. It will make their lives more difficult,” Anthony Granado, vice president of government relations at Catholic Charities USA, said.

“We can fill in the gaps and invariably be present, but to do more would really be a burden on the system,” Middlecamp told Catholic News Service.

The plan alarmed the Coalition on Human Needs so much that it organized a campaign to have its members submit comments to the OMB, leading to more than 52,000 filings.

“We really decry these kinds of actions and policies that are exacerbating the growing wealth and income disparity in our country,” said Presentation Sister Richelle Friedman, the coalition’s director of social policy.

The advocates base their concerns in large part on the findings of the Center on Budget and Policy Priorities, a Washington think tank that studies poverty-related issues. The center projected over the next decade that using the chained CPI would result in:

— More than 250,000 seniors and people with disabilities losing or receiving less help through the Medicare Part D program, leading to higher premiums for drug coverage and/or higher out-of-pocket costs for prescription drugs.

— More than150,000 seniors and people with disabilities losing eligibility for a program that covers the Medicare Part B premium.

— More than 300,000 children and some pregnant women losing comprehensive coverage under Medicaid or the Children’s Health Insurance Program.

— More than 100,000 children no longer eligible for free or reduced-price school meals.

The dependence on the CPI to measure inflation has its flaws, the advocates agreed. It has been used since 1955, when households spent a lot more on food than they do today. The advocates said they believe that using the chained CPI would be even less accurate, in contrast with administration claims.

Sister Friedman, Sister Haddad and the others would like to see a more comprehensive approach to tracking inflation, one that considers not just consumption but also housing, utility, transportation, health care and child care costs.

“We recommend that the federal government develop an additional index that evaluates how low-income persons spend their money,” Granado told CNS. “It will provide a clear understanding of how poverty manifests itself in the country.”

There is no timeframe for implementing the new inflation measuring policy and with the close of the comment period June 21, the OMB can put it in place at any time or not at all.

NEXT: Sister Pimentel shares stories from the border with U.S. priests