Sister Pimentel shares stories from the border with U.S. priests 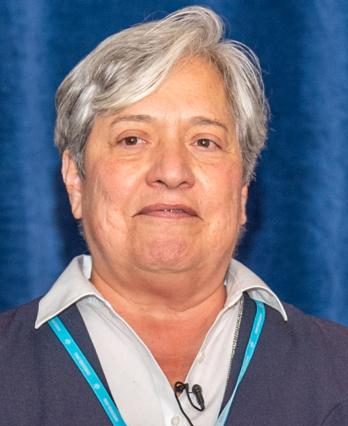 ST. LOUIS (CNS) — If Sister Norma Pimentel has said it once, she has said it dozens of times: She is “a U.S. citizen by chance.”

Born in Texas, where her parents were waiting for an answer on their residency request, Sister Pimentel told the annual assembly of the Association of U.S. Catholic Priests June 25 that she grew up “between the borders,” crossing back and forth between Brownsville and Matamoros, Mexico, with family in both communities.

Since 2008 Sister Pimentel has been executive director of Catholic Charities of the Rio Grande Valley in the Diocese of Brownsville. She is a member of the Missionaries of Jesus, a religious order founded in Spain whose members are taking care of the thousands of families crossing the border into the United States.

Sister Pimentel’s address included stories about the people she and the other sisters serve, engaging the 260 priests attending the assembly. The Catholic Charities operation includes the Humanitarian Respite Center in McAllen, Texas, which has helped more than 150,000 people since it opened in 2014. More than half of those served have been children younger than 10. In early June, Sister Pimentel said, the center was seeing 900 to 1,000 people a day.

Some families arrive at the center with their children; others have been joyfully reunited.

But Sister Pimentel described an experience she had at a detention center, that remains “like a dagger in my heart.” There, children were packed in cells, with no showers and no room to sit or lie down.

“I saw these kids looking through these glass windows, all these little faces, just staring, full of tears, looking at you like, ‘Please help me,'” she recalled.

Sister Pimentel initially was stopped from entering one cell, but when she said she wanted to pray she was allowed inside.

“It was the most difficult thing that I have ever lived in my life, to see those kids all around me. … Close to a hundred kids in that cell, all crying, all looking at me with tears in the face, pulling my dress and saying, ‘Please get me out of here.'” But she said there was nothing she could do, because U.S. policy at the time was not to reunite families who were separated.

“Our country is suffering from a grave humanitarian problem,” she said. “The policy of separating families is heartless and put in place by people who didn’t care about the pain and suffering it was going to cost.

“We all have a responsibility to do something about that … to help people … to do away with indifference, as if it is OK to discard people because they are different than us,” she said. “So people are suffering, and we are silent.”

She said it seems Americans live in a culture of comfort. “It’s almost like we live in a bubble, where people protect themselves from not feeling uncomfortable. … So I say that I go around popping bubbles, so they can see things for what they are.”

Sister Pimentel cited Pope Francis and his call for leaders “to smell like the sheep.” In the Rio Grande Valley, she explained, there are “a lot of men and women who have walked for weeks and months, and when they take their shoes off … I give thanks to God for being part of that smell.”

When a new arrival at the respite center is greeted with a welcoming smile, she said, “there are tears of joy that somebody took recognition of them as a person. And after a shower and something to eat, that person becomes transformed. God becomes present to both of us.”

The problem is not at the border, she explained, but in the countries where families face repression, violence and fear that their children will be killed or recruited into gangs. “If we really wanted solutions, we can find them.”

Sister Pimentel concluded her address with a plea: “As leaders today, we must allow ourselves to be uncomfortable and to do more. True leadership unfolds by accompanying others who are suffering.”

PREVIOUS: Plan to change how inflation is measured concerns advocates for poor

NEXT: ‘Dad-vocate’ for Down syndrome children offers powerful pro-life example