They’ll go to jail or die rather than violate sacrament’s secrecy, priests say 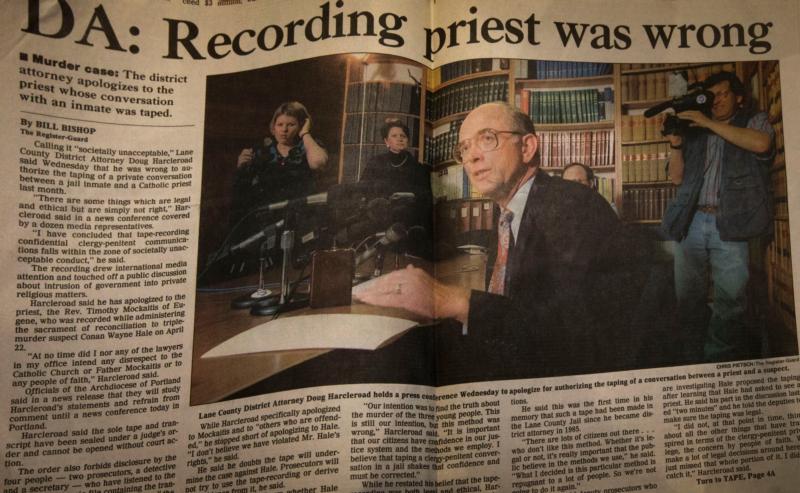 A newspaper clipping seen May 3, 2019, chronicles the fallout after the state of Oregon in 1996 secretly recorded a confession heard in a Eugene, Ore., jail by Father Timothy J. Mockaitis, now pastor of Queen of Peace Catholic Church in Salem, Ore. (CNS photo/Chaz Muth)

NEW YORK (CNS) — A symbol of the historical commitment priests have to the seal of confession greets people as they cross the threshold of a Catholic church in Manhattan’s Upper East Side.

Above the door is a stone-carved image of St. John Nepomucene holding two fingers to his lips, signifying that priests must never reveal what is said to them in the confessional, even if that means paying the ultimate sacrifice of death.

This church is named for St. John Nepomucene — considered the patron saint for the seal of confession — and it’s adorned with artwork that tells the story of this 14th-century Bohemian priest who chose death rather than reveal what was said during the sacrament of penance.

His story demonstrates how seriously the Catholic Church takes the privilege between priest and penitent that a member of the clergy is willing to sacrifice his freedom, or even his life, to protect the seal of confession, said Dominican Father Pius Pietrzyk, a canon and civil lawyer who teaches at St. Patrick’s Seminary and University in Menlo Park, California.

It also shows that the current struggle for the church to have governments fully respect the sanctity of the seal of confession is not a new one, Father Pietrzyk told Catholic News Service in a May interview.

St. John Nepomucene was born sometime around 1340 and became a popular priest in what was then known as Bohemia. Ultimately, he was invited to be a confessor at the court of King Wenceslaus IV in Prague.

According to historical accounts, a jealous King Wenceslaus ordered John Nepomucene to tell him what his wife, Queen Johanna, revealed in the confessional and when he refused to break the seal of confession, the ruler made threats of torture and eventually had him bound and thrown off the Charles Bridge in Prague, where he drowned March 20, 1393.

Father John Nepomucene’s martyrdom for the seal of confession was accepted by the church and he was canonized by Pope Benedict XIII in 1729.

“St. John Nepomucene is a symbol of what all priests know and that is the seal of confession is absolute and the privilege between priest is penitent must be absolute,” said Father Richard D. Baker, pastor of St. John Nepomucene Catholic Church in New York City. “What happens there never, never is repeated.”

Father Pietrzyk makes a point of sharing this chapter in church history with the seminarians he teaches in his penance class at St. Patrick’s Seminary to help them understand why priests are willing to be martyred to protect the sanctity of confession.

The Code of Canon Law states the penalty for a priest who violates the seal of confession is automatic excommunication, which can only be lifted by the pope himself.

The punishment is that severe because penitents must be able to confess their sins in specificity in order to be reconciled with God and trust that the priest will honor confidentiality of the confessional, said Father Thomas V. Berg, professor of moral theology at St. Joseph’s Seminary in Yonkers, New York.

A bill going through the California Legislature would require a priest to report to civil authorities information concerning child sexual abuse learned in the confessional by another member of the clergy or a co-worker.

“I don’t think it would be a difficult decision for a priest to make when faced with this dilemma. Break the seal or go to jail? Absolutely, I would not break the seal of confession,” said Father Ryan P. Lewis of Holy Ghost Catholic Church in Omaha, Nebraska. “I would go to jail.”

Though St. John Nepomucene is the most well-known martyr for the seal of confession, other priests throughout history were either jailed or condemned to death rather than reveal what was confessed in the sacrament of penance, including three in the 20th century.

St. Mateo Correa Magallanes, canonized by St. John Paul II in 2000, was shot to death in 1927 in Mexico after refusing the orders of Gen. Eulogio Ortiz to reveal the contents of the confessions of imprisoned members of an insurgency movement, the Cristeros.

He was joined by two Spanish priests — Blessed Felipe Ciscar Puig and Blessed Fernando Olmedo — both considered martyrs of the sacramental seal, executed in 1936 for refusing to reveal the contents of confessions of prisoners held during the Spanish Civil War.

Toward the end of the 20th century, Father Timothy J. Mockaitis of Eugene, Oregon, was engaged in his own battle against the state where he ministered to keep secret the contents of a 1996 confession he heard from a detention center inmate.

Father Mockaitis had been a chaplain at the Lane County Adult Detention Center at the time when he learned the confession he heard from an inmate and a suspect in a murder case had been secretly taped by jail officials and a state prosecutor was attempting to secure a legal way of listening to it.

The Archdiocese of Portland and Father Mockaitis objected to this use of a confession, demanded that the tape be destroyed and pursued the case through the legal system.

The 9th Circuit of the U.S. Court of Appeals eventually ruled that the state of Oregon could not use the tape in a prosecution, but, it didn’t order the destruction of the recording.

“So, we only viewed this as a partial victory,” Father Mockaitis told CNS in a May interview. “As far as I know, that tape is still sitting in an evidence locker somewhere. That tape is a symbol of the state’s violation of a sacramental confession and a violation of religious freedom.

“It’s an affront to the separation of church and state and the fact that it still exists is a slap in the face to the church,” said Father Mockaitis, who wrote a 2008 book titled “The Seal: A Priest’s Story,” recounting the episode. “The fact is, in a country whose foundation is based on religious freedom, this tape never should have been made in the first place.”

History shows there have been attempts by governments to obtain information revealed in the confessional for centuries, an effort that continues today.

In the past two years lawmakers in the U.S., Australia and Chile, have crafted legislation that would compel priests to violate the seal of confession, in one form or another, to address the global child sexual-abuse crisis, said Father Ronald T. Kunkel, theology professor at Mundelein Seminary at the University of St. Mary of the Lake in Illinois, near Chicago.

Father Kunkel has told seminarians at Mundelein to be prepared for the state to try and compel them, in some circumstances, to break the seal of confession.

“That threat is very real,” he said, “and that is something we simply cannot do.”

NEXT: Protecting seal of confession called essential for civilized society