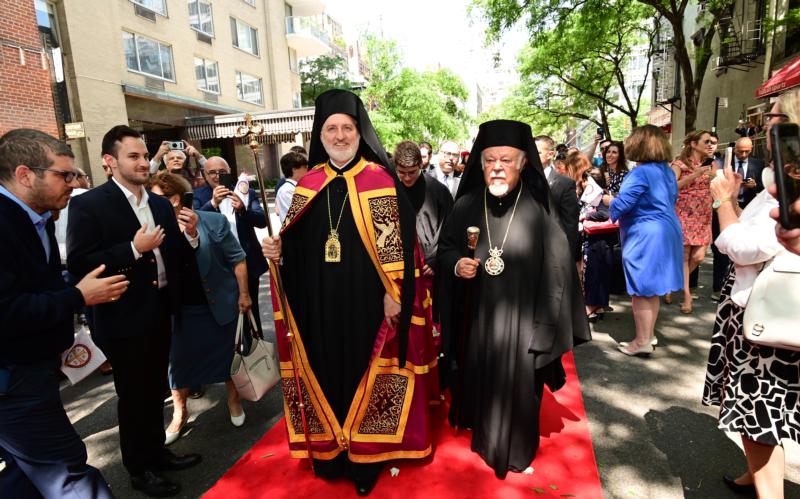 WASHINGTON (CNS) — Catholic and Greek Orthodox clergy hope to continue on a path of collaboration between their two churches with the momentum from the June 22 enthronement of Archbishop Elpidophoros of America.

“I expect that he will be personally and profoundly interested and involved in promoting the theological consultation between our two churches in the United States that began as early as 1965,” said Archdeacon John Chryssavgis, a theologian in the ecumenical office of the Greek Orthodox Archdiocese of America. “Moreover, I am certain that he will nurture and advance tangible, practical relations with America’s Roman Catholic leaders and communities.”

While the Greek Orthodox Church does not accept the authority of the pope, the Catholic and Orthodox churches share the same faith and and the Catholic Church recognizes the validity of Orthodox sacraments. They also share a profound devotion to Mary, the mother of God.

Over the past 20 years, some local, parish-level cooperation blossomed between Catholic and Greek Orthodox communities.

Orientale Lumen, which began in Washington in 1997, seeks to provide opportunities for Orthodox and Catholics to meet, pray together, and discover their myriad similarities and shared goals through yearly conferences.

In 2013, the U.S. Conference of Catholic Bishops and the Greek Orthodox Archdiocese teamed up to launch Faith and Safety, a website to help keep children protected on the web, both from predators and from content.

Paulist Father Ronald Roberson, associate director of the Secretariat for Ecumenical and Interreligious Affairs at the USCCB, agreed that more binds the Orthodox and Catholic churches together then separates them.

“Catholic teaching is that these are the church’s real sacraments, they are sister churches to us, and so we are just as concerned about them as we are about ourselves,” Father Roberson told Catholic News Service. “We are all bound together in the same faith, the same baptism, the same Eucharist, the same holy orders and all the rest.”

On a global scale, Greek Orthodox and Catholics began to combat abortion by providing support to destitute pregnant woman. The two churches also work together to support persecuted Christians in the Middle East.

Since the Second Vatican Council’s Decree on Ecumenism, leaders of the two churches have established official dialogues. Today, Pope Francis and Ecumenical Patriarch Bartholomew, considered first among equals of most of the major Orthodox churches, are steadfast in their joint work to bring their churches into greater communion. In 2016, the two met in Assisi, Italy, for an interfaith peace conference, and in 2017 they issued a joint statement to mark World Day of Prayer for the Care of Creation.

“It is — I believe — providential and not merely coincidental that Patriarch Bartholomew and Pope Francis are at the helm of our two respective churches at this critical moment when persecution and poverty are so prevalent in our world, while global warming and war are threatening our own generation and the future of our children,” Archdeacon Chryssavgis said.

Often the two churches simply become so internally engaged, he said, that they neglect to look to their “sister church” for both support and to support.

Archdeacon Chryssavgis said both churches ought to make an effort to remember their goodwill toward the other. Both churches need to “break hardened habits that lead us to imagine our own problems are more painful or more paramount than those of our brothers and sisters in other churches,” he said.

NEXT: They’ll go to jail or die rather than violate sacrament’s secrecy, priests say