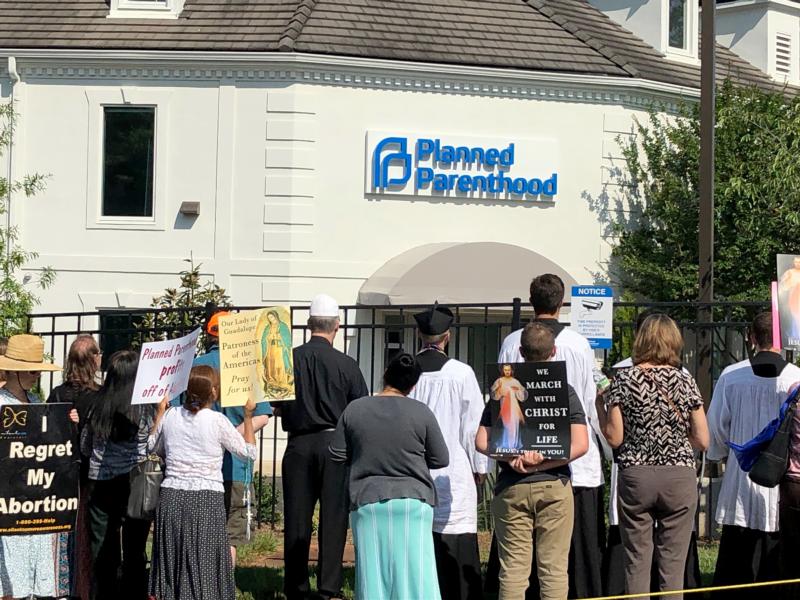 Catholics pray for an end to abortion during a June 15, 2019, procession and rally outside Planned Parenthood’s new location in Charlotte, N.C. The facility is larger than its previous location and is located in a historically African American neighborhood of Charlotte. Pro-life groups, grassroots organizations and churches have united in opposition to the new location. (CNS photo/Patricia L. Guilfoyle, Catholic News Herald)

Planned Parenthood South Atlantic is moving its Charlotte Health Center to a larger building in a historically black neighborhood of Charlotte, about a mile away from St. Patrick Cathedral.

Its current rented location in Charlotte offers only abortion referrals, but the new 10,626-square-foot facility will offer “the full range of legal services,” Pam Pearson, chair of Planned Parenthood South Atlantic’s board of directors, told The Charlotte Observer daily newspaper.

Before Planned Parenthood has even opened, however, grassroots organizations and churches have been holding multiple prayer vigils and rallies just outside the tall iron fence encircling the property.

“A Catholic presence is needed in this fight for the unborn, and the time for action is now,” said Jessica Grabowski, director of the Diocese of Charlotte’s Respect Life office.

Grabowski, members of the grassroots Carolina Pro-Life Action Network and other pro-life leaders in Charlotte have been organizing ways for people to mobilize.

“As a diocese, we can come together to pray to have abortion ended in our city,” said Andrea Hines, a pro-life activist who had an abortion in college and now speaks about her experience as part of the Silent No More campaign.

Catholics held a 40 Day Vigil in May and June, with at least one person praying silently outside the facility for at least one hour every day.

“The theme throughout all of this is love and peace,” Hines said. “Being silent really makes a difference.”

Students in a Charlotte area homeschooling group are praying the “Memorare,” which seeks Mary’s intercession, in response to the news about Planned Parenthood. Their goal is to pray one “Memorare” for every dollar that Planned Parenthood spent to buy the new facility — that’s 2,350,000 prayers for the $2.35 million price tag — by the feast of the Assumption, Aug. 15.

Planned Parenthood’s new location will be the fourth abortion facility in Charlotte, which already is North Carolina’s abortion capital.

Charlotte’s centralized location, easy access and proximity to the South Carolina border make it the busiest city in the state for abortions.

According to the latest data available from the state Department of Health and Human Services, more than 36 percent of the total 27,183 abortions performed in North Carolina in 2017 were in Charlotte.

Mecklenburg County reported 9,912 abortions in 2017 — more than any other county in North Carolina. Fewer than half of those, 3,890 abortions, were performed on county residents.

The new abortion facility sits at the edge of the Cherry neighborhood, a historically black neighborhood that is undergoing rapid change.

Some neighbors said they knew a medical office was going into the renovated building, but not everyone knew it was going to be Planned Parenthood.

Planned Parenthood masked its purchase of the property in 2017 through a shell corporation, Secure Source LLC.

An elderly man who has lived in the Cherry neighborhood for decades said the former property owner told people about the sale to Planned Parenthood in 2017 at a neighborhood meeting, and warned of the likelihood of increased traffic and protest crowds.

“It is what it is,” the unidentified man shrugged.

Then he pointed down the street to the now-closed Community Charter School, a prominent building that has been a focal point for the neighborhood since the 1920s, and commented that the building used to house a school for pregnant teens in the 1980s.

A young woman who moved last November into a home right across the street from the location expressed support for Planned Parenthood and said she hoped the new center is successful.

But the resident who lives next door to the Planned Parenthood site said he was “appalled” to hear the news. A pediatric anesthesiologist who also is a Catholic, he said he is sickened by abortion and the throwaway mindset it represents.

“I’ve helped premature babies at 26 weeks, then at 24 weeks, now at 22 weeks,” he said. His respect for life, he said, stems from the fact that he sees exactly what an unborn child looks like – including seeing an unborn baby squirm and cry out in pain when he has to prick them with a needle to anesthetize them during a surgical procedure.

Planned Parenthood officials told The Charlotte Observer the Cherry neighborhood location was chosen because of its accessibility and security, and they are planning for protests.

Evangelical Christians, black pastors of Protestant congregations and Catholics staged a prayer rally in a neighborhood park next to Planned Parenthood June 15.

More than 300 people came out to the “Save Our Children” rally, which was organized by faith-based grassroots organizations and local African American churches.

Clergy leaders condemned abortion as a sin and as genocide against African Americans, and they called Planned Parenthood “merchants of death.”

They called on people to combat abortion by supporting resources for pregnant women in need, educating people, and praying for a conversion of hearts.

Prayer must be at the heart of the pro-life movement, the speakers emphasized — for all life to be valued, for people to repent of the sin of abortion, and for God to have mercy on the City of Charlotte.

“My heart breaks for this community, this city,” said Davon Alexander of True Life Fellowship Church in Matthews, North Carolina. “We cannot be silent. We must stand as a church. We must stand as the people of God.”

“In this nation, for 46 years, 65 million children’s rights to life, liberty and the pursuit of happiness have been denied,” said Pastor Leon Threatt of Christian Faith Assembly in Charlotte. “There are two great failures, I believe, that we face today: first, is the discovery of how to take life from within the womb. … But I think the greatest failure of our generation is somehow we’ve learned to live with it and to be quiet while it’s occurring.”

“The No. 1 killer among ethnic minorities, among black folks, in our country is abortion,” said the Rev. Kevrick McKain, one of the rally organizers. “It’s time that it end during our generation, not someone else’s generation.”