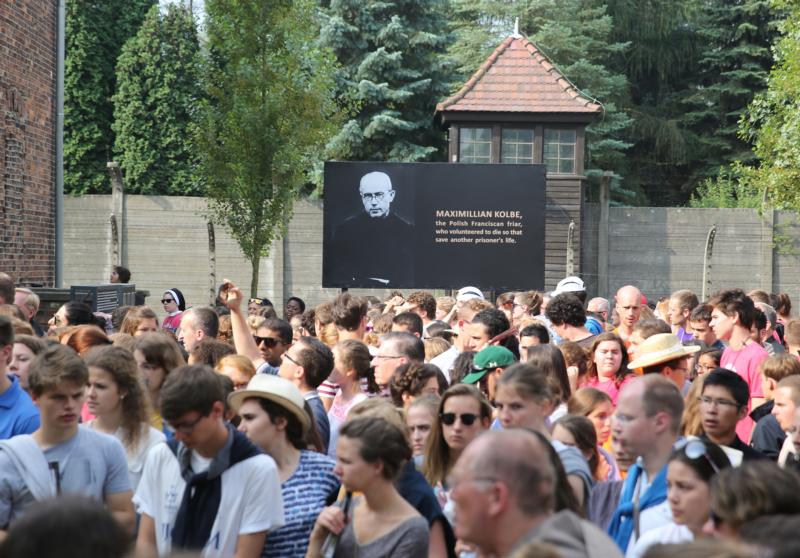 World Youth Day pilgrims and other visitors pause near an image of St. Maximilian Kolbe during a July 25, 2016, visit to the Auschwitz Nazi concentration camp in Oswiecim, Poland. During the week of July 15, 2019, 35 teachers from U.S. Catholic middle and high schools briefly went back to school in Washington to learn how to better approach anti-Semitism and the Holocaust in the classroom. (CNS photo/Bob Roller)

WASHINGTON (CNS) — A group of 35 teachers from Catholic middle and high schools around the country went back to school briefly this summer to learn how to better approach anti-Semitism and the Holocaust in the classroom.

In its 24th annual summer conference, Bearing Witness — a partnership between the U.S. Conference of Catholic Bishops, the National Catholic Educational Association, the U.S. Holocaust Memorial Museum, and Georgetown University– hosted the teachers for five days, beginning with an opening ceremony at the Holocaust museum July 15.

Throughout the week, Bearing Witness addressed the historical relationship between Catholics and Jews, the ideas that led up to the Holocaust, the Holocaust itself, and how the relationship between Catholic and Jews has changed. They also explored ways to bring these theoretical ideas into the classroom and to encourage students, not to stand by and accept anti-Semitic bullying, but to stand up for and ally with victims.

“Some of the big takeaways for me are especially when I teach the book ‘Night’ to the eighth graders,” Parker told Catholic News Service. “When I teach the book, our focus is of course so much on the activities in the Holocaust, but I have learned at this training that I need to include the ‘before’ life to show my students that these are people, people like them who had a house belongings, faith rituals, daily rituals, family rituals, to have my students see them as humans and not just victims.”

“Night” is a 1960 memoir by Elie Wiesel, who wrote about his experience with his father in the Nazi German concentration camps at Auschwitz, in occupied Poland, and Buchenwald, Germany, in 1944-1945.

Washington Archbishop Wilton D. Gregory spoke to the teachers during the program, affirming the importance of educating kids about treating people with love and kindness despite differences. He maintained that prejudice and intolerance are learned, and that educators are the very people with the greatest power to unteach hate.

Jen Cabigas, a teacher at Our Lady of Good Counsel High School in Olney, Maryland, said she felt the tools Bearing Witness gave her during the week were universally applicable.

“I think we started the program talking about the importance of religious literacy and being able to dialogue with one another and examine our own bias and I think that’s sort of the starting point,” Cabigas said. “It goes beyond just the Holocaust or anti-Semitism, it is a tool we can use to address any kind of discrimination.”

The group visited Georgetown University to learn practical methods to prevent anti-Semitic sentiments from growing among students. Participants also went to the French ambassador’s house to celebrate France’s dedication to supporting the Jewish people in Europe.

The program also is a testament to the cooperation that has developed between the Catholic Church and Jewish leadership since the Second Vatican Council document “Nostra Aetate,” the Declaration on the Relationship of the Church to Non-Christian Religions. In the declaration, the Vatican officially affirmed its shared patrimony with the Jewish people and acknowledged that the Jews are neither cursed nor rejected by God for helping to fulfill the passion of Jesus Christ.

Seth Gordon-Lipkin, education director for ADL in the District of Columbia regional office, explained that ADL seeks to take a proactive, rather than reactive approach to “Nostra Aetate,” bringing those messages to Catholic communities preemptively, rather than responding to incidents of anti-Semitism.

“It’s good that the proclamation was made in the ’60s, but it takes time for change to unfold and a lot of the messages haven’t fully trickled down to our communities,” Gordon-Lipkin said. “So, being a little more forward thinking, and doing that more proactively than reactively is something that’s really critical.”

Bearing Witness is one of ADL’s many outreach programs intended to do just that.