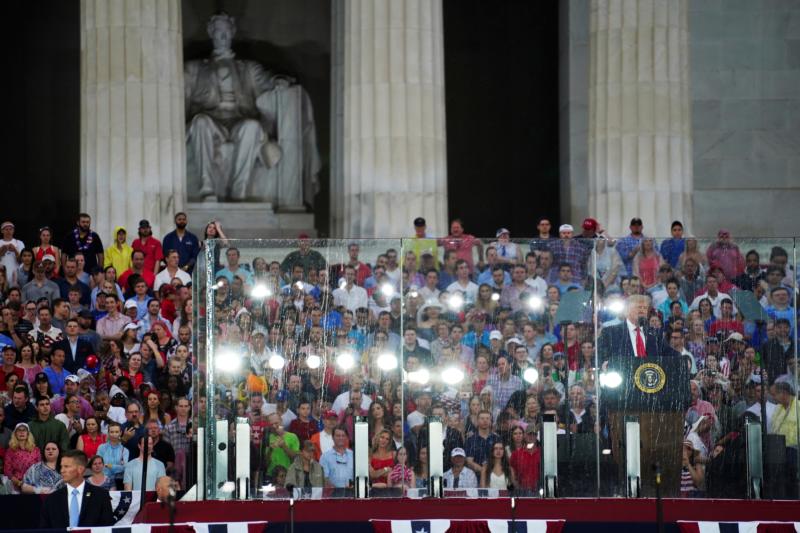 WASHINGTON (CNS) — In his “Salute to America” speech July 4 at the Lincoln Memorial, President Donald Trump praised the work and dedication of a woman religious and the Catholic man who was the flight director of the historic Apollo 11 moon landing.

Trump highlighted significant events in American history, starting with the heroes of the American Revolution, and said the same American spirit “that emboldened our founders has kept us strong throughout our history.”

Among those in the audience at the speech and called out by Trump for their service to the country were Gene Kranz, a lifelong Catholic, who was the flight director of Apollo 11, and Sister Deirdre “Dede” Mary Byrne, a member of the Little Workers of the Sacred Hearts in Washington, who is a military veteran and a physician and who serves the poor in the Archdiocese of Washington.

“For Americans, nothing is impossible,” the president said. “Exactly 50 years ago this month, the world watched it all as Apollo 11, astronauts launched into space with a wake of fire and nerves of steel, and planted our great American flag on the face of the moon, or half a century later.

“We are thrilled to have here tonight the famed NASA flight director, who led Mission Control during that historic endeavor — the renowned Gene Kranz.”

“Gene,” Trump said, “I want you to know that we’re going to be back in the moon very soon and someday soon, we will plant the American flag on Mars.”

He also spotlighted Sister Byrne for her nearly 30 years of military service in family medicine and surgery as well as rushing to the scene of the 9/11 terrorist attacks in New York to help victims. Trump also noted her ministry to the poor.

“On Sept. 11, 2001, (she) raced to ground zero. Through smoking debris, she administered first aid and comfort to all. Today Sister Byrne runs a medical clinic serving the poor in our nation’s capital. Sister, thank you for your lifetime of service,” Trump said.

Kranz, 85, was feature in an article in the March 2019 issue of Columbia magazine, published by the Knights of Columbus. He joined the Knights in 1959.

He spoke to writer James Ramos about how throughout his successful 34-year career at NASA and before that in the Air Force, he has always looked at his work, marriage and fatherhood with the perspective of his Catholic faith. He paid tribute to the women religious who taught him in high school and the Jesuits at St. Louis University.

He added that the Knights’ “code of charity, unity, fraternity and patriotism add to my life’s foundation.”

In a 2016 interview, Sister Byrne told the alumni magazine of her alma mater, Georgetown University in Washington, about how she ended up being in New York at the time of 9/11: She had to transport a fellow religious sister there for medical treatment the prior day.

The twin towers of the World Trade Center fell the morning of 9/11, and by evening Sister Byrne and two sisters had been sent to the base of the towers, with instructions to answer the call to dispense supplies and support to the firefighters.

“We could barely see through the smoke,” she recalled. The three finally made it on foot to the police barriers near 10th Street. “We probably shouldn’t have gotten through, but between the sisters’ habits and my medical license, it opened the door for us.” She worked in a first aid tent and dispensed care, support, and supplies.

Contributing to this story was Mark Zimmermann, editor of the Catholic Standard, newspaper of the Archdiocese of Washington.