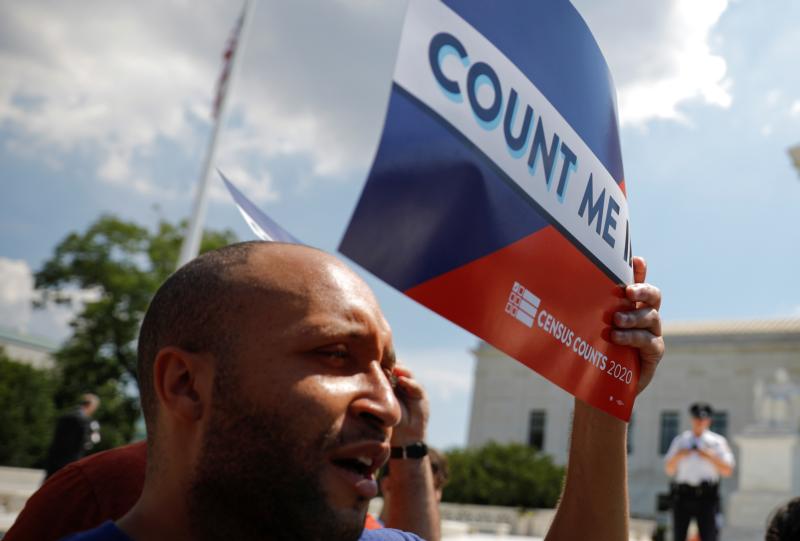 A protester holds a sign outside the U.S. Supreme Court June 27, 2019, after the court ruled on adding a citizenship question to the 2020 census. The 5-4 ruling, which was written by Chief Justice John Roberts and joined in part by the other justices, said the Trump administration’s reason for adding the citizenship question “seems to have been contrived.” (CNS photo/Carlos Barria, Reuters)

UPDATED – WASHINGTON (CNS) — Although the Justice Department announced July 2 it would no longer argue to have the citizenship question added to the 2020 census, the Trump administration continues to look at all possible options to get the question included.

A federal judge in Maryland who heard one of the lawsuits on the citizenship question gave White House officials until midday July 5 to provide a credible reason for including the question.

The Justice Department’s decision not to move forward with the question — “Is this person a citizen of the United States?” — came in response to the Supreme Court’s recent decision to block it from the questionnaire and amid pressing deadlines to begin printing the forms, which started July 1.

Commerce Secretary Wilbur Ross said in a statement that he strongly disagreed with the high court’s ruling over the planned additional question and President Donald Trump tweeted that it was a “very sad time for America when the Supreme Court of the United States won’t allow a question of ‘Is this person a Citizen of the United States?’ to be asked on the #2020 Census.”

He also said he asked the Commerce and Justice departments to “do whatever is necessary to bring this most vital of questions, and this very important case, to a successful conclusion.”

The day the decision was announced, President Donald Trump tweeted that he was asking his lawyers if they can “delay the census, no matter how long” until the “Supreme Court is given additional information from which it can make a final and decisive decision.”

Trump told reporters July 1 at the White House: “It’s very important to find out if somebody is a citizen as opposed to an illegal.”

The U.S. Conference of Catholic Bishops’ statement on the high court’s decision said: “All persons in the United States should be counted in the census regardless of their immigration status.” It also reiterated its previous statement on the issue by stressing that “questions regarding citizenship should not be included in the census. We hope that this view will prevail, whether by administrative action or judicial determination.”

The census case hit a potential twist in late May, a month after oral arguments, when newly submitted evidence from the files of a deceased Republican strategist put the citizenship question in another light: as a means to create an advantage for whites and Republicans in future elections.

Then in late June, a federal appeals court in Maryland allowed a lower court to study the background of these files.

The government had asked the Supreme Court to rule on the census dispute by the end of June, so that it can finalize the census questionnaire and get the forms printed in time for distribution next year.

During oral arguments about the added census question in April, Justice Sonia Sotomayor said: “There’s no doubt people will respond less” to the census questionnaire with a citizenship question, a point which she said “has been proven in study after study.”

Both Roberts and Justice Samuel Alito said the decision by Commerce Secretary Wilbur Ross to add a citizenship question — for the first time since 1950 to improve compliance with the Voting Rights Act — seemed reasonable. But Justice Elena Kagan said Ross’ reason for adding this question seemed “contrived.”

In its defense, U.S. Solicitor General Noel Francisco said the information it would provide would help enforce the Voting Rights Act. When asked about the question leading to potentially less participation, he said: “There is always going to be a trade-off.”

Lawyers for New York, immigrant advocacy groups and the House of Representatives stressed that the question would prevent noncitizens from filling out the census and have a negative financial and political impact on communities with large immigrant populations.

A similar argument was raised in a friend-of-the-court brief opposed to the citizenship question filed by Catholic Charities of the Archdiocese of New York and Catholic Charities of Brooklyn and Queens in New York. The brief stressed that the added question would cause a “net differential undercount of people who live in noncitizen and Hispanic households” and would result in a “drastic and unwarranted reduction in funding in states and cities with large populations of such persons” and also would impact social service agencies.

In a USCCB statement issued on the day of oral arguments for the census case, Bishops Dewane and Vasquez stressed the importance of an accurate census count.

Bishop Vasquez said all people should be counted in the census, regardless of their citizenship and he said “proposed questions regarding immigration status will obstruct accurate census estimates and ultimately harm immigrant families and the communities they live in.”

By one government estimate, about 6.5 million people might decide not to participate in the census with the added citizenship question.

PREVIOUS: Religious freedom is basis of all other freedoms in U.S., cardinal says