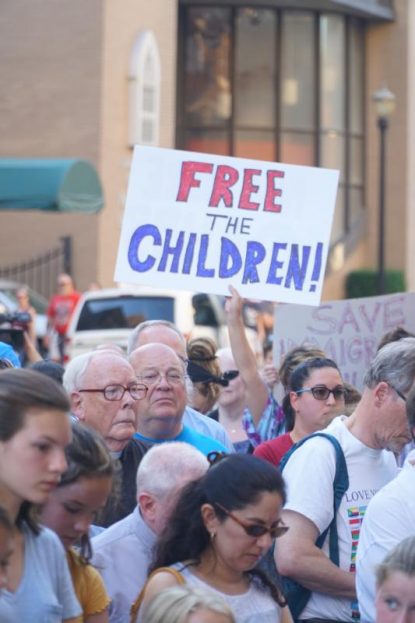 People gather on the steps of the Cathedral of the Assumption in Louisville, Ky., July 12, 2019, to hold a vigil for immigrants in detention centers along the U.S. southern border and protest their living conditions. Local faith leaders and concerned citizens prayed for migrants, refugees and asylum-seekers at the “Lights for Liberty: A Vigil to End Human Detention Camps.” (Record Photo by Jessica Able)

LOUISVILLE, Ky. (CNS) — Mara Whitford, an expectant mother, held a handwritten sign that said, “I’d walk 1,000s of miles for my baby, too” as she stood outside the Cathedral of the Assumption in downtown Louisville.

Whitford, a parishioner of St. William Church, was one of about 250 people who attended a candlelight vigil at the cathedral to protest the treatment of migrants and asylum-seekers at the southern U.S. border.

Appalled at news reports saying there are squalid condition of some immigrant detention centers, Whitford said it’s distressing to see accounts of children — including infants and toddlers — taken from their mother’s arms.

“The idea of anyone doing that to my baby –,” she said as she choked back sobs unable to finish her sentence. “This demonstration shows how many are against the detention camps.”

The July 12 event — “Lights for Liberty: A Vigil to End Human Detention Camps” — was hosted by Catholic Charities of Louisville and was one of hundreds of such vigils across the country and around the world.

The vigil featured several speakers, including local faith leaders, Catholic Charities staff and a Holocaust survivor. It concluded with a moment of silent prayer by candelight.

Deacon Lucio Caruso, director of mission at Catholic Charities, read a statement from Louisville Archbishop Joseph E. Kurtz, who recently announced he is being treated for prostate and bladder cancer.

In his statement, the archbishop said those who come to the U.S. border should be treated “with the respect and dignity they deserve as children of God. We can do better. Let us join together to ensure that we do.”

He noted his roots as the grandson of Slovakian and Polish immigrants who came to the U.S. to seek a better life.

“The diversity and hope of so many over the last 200+ years who have journeyed to the United States have made us what we are today. Our continued efforts to welcome, protect, promote and integrate migrants will make us stronger tomorrow,” he said.

Father Troy Overton, pastor of St. Edward Church, read a “Prayer for Migrants and Refugees” and said “as people of faith, we support those detained in inhumane conditions on our southern border.”

“What we are seeing at the border is sin, pure and simple — the U.S. bishops have made clear that the situation is unjust and must change. Catholics should know this,” he said.

He noted that central Kentucky, much of what is present-day land covered by the Archdiocese of Louisville, was largely settled by Catholics fleeing “political discrimination and religious intolerance” in Europe.

During the 19th century, he noted, “waves of Catholic Irish and German immigrants were met with more oppression” as nativism spread across the country.

“Here in Louisville, during the Bloody Sunday Riot of 1855, 22 people were killed, scores wounded, homes and businesses burned. Our own Cathedral of the Assumption and St. Martin of Tours Church were threatened with being burned to the ground as well,” he said.

“God help us to indeed have a holy fear and amend our ways. Let us today hear the cry of the poor, and God help us, do something to end this human suffering,” he said.

Fred Gross, a Holocaust survivor, spoke to the crowd about “welcoming the stranger.”

“Here in Louisville, a noted city for compassion, the major faiths — the Catholics, the Jews, the Muslims and other faith communities here — have come together to welcome our immigrants,” he said.

Gross noted that he came to the U.S. as a refugee in 1946 and recalls the “sharp stab of fear” he and his family experienced in their pursuit of safety in America.

“Children separated today from their parents is an abomination and we won’t tolerate it,” he said.

Rev. Campbell noted that people don’t “just pick up and leave homes and walk thousands of miles for no reason.”

“We should call on our leaders to learn about and respond to the reasons why people are fleeing from their homes and ending up on our southern borders,” she said. “We need to help the nations of Central America in particular become more stable, more secure, more able to protect their own people.”

She added that as Christians, we “trust in the one who said ‘I was a stranger and you welcomed me.'”

The crowd was urged to express concern for migrants and asylum-seekers by sending postcards to their lawmakers.