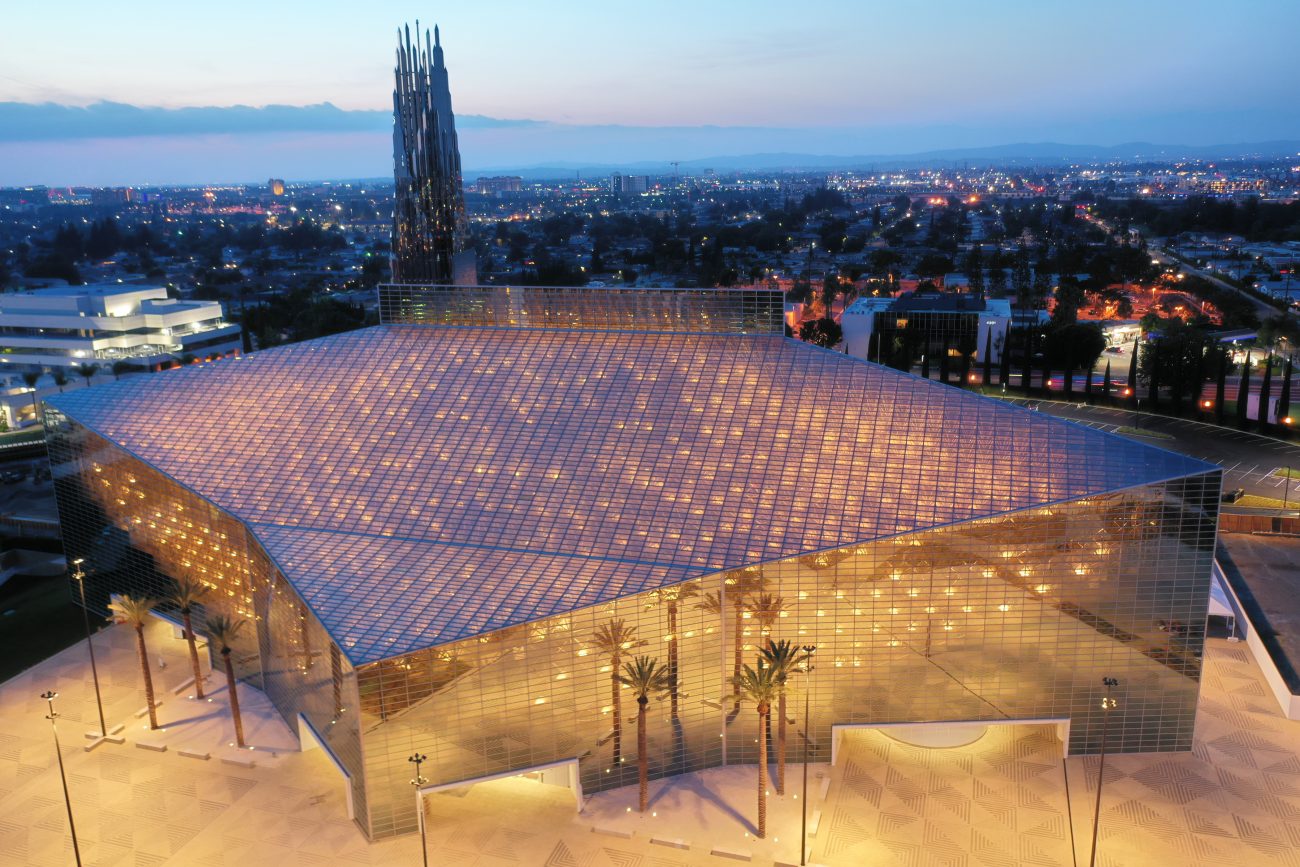 The Christ Cathedral in Garden Grove, Calif., in the Diocese of Orange, is seen in a July 8, 2019, photo. (CNS photo/courtesy Southern California News Group/OC Register)

GARDEN GROVE, Calif. (CNS) — Tim Strader believes Christ Cathedral of the Diocese of Orange “will become the most important Catholic cathedral in the United States, other than St. Patrick’s” in New York.

Strader, with his wife, Susan, led the fundraising campaign to finance the sanctuary of the cathedral.

They were among some 800 diocesan leaders and donors gathered in mid-July to celebrate the results of years of planning, generous philanthropy and hard work as the transformation of Christ Cathedral unfolded.

The structure was once called the Crystal Cathedral and was the centerpiece of the ministries of the late Rev. Robert Schuller. The Orange Diocese bought the cathedral about nine years ago for $57.5 million and undertook a multimillion dollar renovation of it and its related buildings, all situated in a campuslike setting.

“We have 35 acres, and we have the notoriety from the Schuller years — he had an international following — and we have so many people who come here now,” Tim Strader remarked.

“And we’re ecumenical,” Strader continued. “We welcome all faiths. So tonight we can finally see that our new cathedral has become a reality.”

The celebration gala came ahead of the July 17 dedication of Christ Cathedral. Following a reception on the campus’ South Plaza, attendees filed into the cathedral where many got a first look at the completely renovated cathedral.

Stunning images of the cathedral and its surrounding campus were showcased throughout the video.

The evening included performances by world-renowned singers Jackie Evancho and Chris Mann, both backed by the Pacific Symphony Orchestra, conducted by Albert-George Schram.

Evancho opened with “Some Enchanted Evening,” followed by “Think of Me.” She later performed “How Great Thou Art” and “Ave Maria,” among other songs. Mann’s selections included “You Raise Me Up” and “Music of the Night,” which he performed during “The Phantom of the Opera’s 25th Anniversary Tour.” 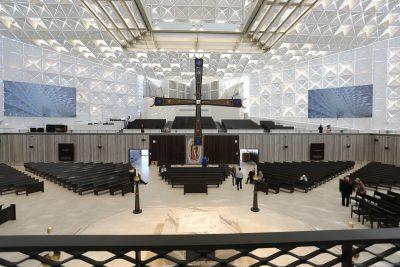 This is an interior view taken July 8, 2019, inside the Christ Cathedral in Garden Grove, Calif., in the Diocese of Orange. (CNS photo/courtesy Southern California News Group/OC Register) See ORANGE-CHRIST-CATHEDRAL July 24, 2019.

During his closing remarks, Orange Bishop Kevin W. Vann thanked the work of his predecessor, now-retired Bishop Tod D. Brown, who was in attendance.

The gala to honor the new Christ Cathedral and all those who were behind the huge project, raised close to $1.75 million to help support the cathedral campus operations and its numerous programs, outreach and ministries.

During the evening Father Al Baca, director of the diocese’s Office for Evangelization and Faith Formation, reflected on a conversation he’d had in the ’90s.

“I knew Dr. Schuller,” he told the Orange County Catholic, the diocesan news outlet. “One day, while I walked him out as he was leaving an event at Holy Family Cathedral, he told me, ‘You know, I can foresee my cathedral becoming a Catholic cathedral someday.'”

On the eve of the dedication Mass, 10 relics of saints and martyrs were venerated during an evening of prayer and vigil, with Orange Auxiliary Bishop Timothy E. Freyer delivering the homily.

According to Lesa Truxaw, director of the diocese’s Office for Worship, it was the last time the faithful could venerate these relics up close before they would be interred beneath the cathedral altar the next day.

In his homily Bishop Freyer spoke of Rev. Schuller’s commitment to building a “place for Christ forever.” Bishop Freyer recounted the acquisition of the cathedral campus and how this man of God had urged the bankruptcy judge to allow the Diocese of Orange, who was not the highest bidder, to acquire the property.

About 44 bishops from all over the country and around the world attended the service. Among them were Cardinal William J. Levada, a former archbishop of San Francisco and retired Vatican official, and Cardinal Roger M. Mahony, retired archbishop of Los Angeles, as well as Archbishop Jose H. Gomez of Los Angeles.

After the prayer service, four different cultural groups led attendees in prayer in their native language. They started with a song and then sang the Litany of Saints. During this time the relics were brought in procession by the various cultural communities.

Christ Cathedral became the new seat of the bishop of the Diocese of Orange and a sign of unity of the diocese’s 62 parishes at the July 17 Mass of dedication, attended by 3,000 people including cardinals, bishops, deacons and priests from all over the world. (The cathedral seats 2,200 — so worshippers the filled the overflow areas.)

The four-hour Mass included the sprinkling of the cathedral with holy water, the anointing of the altar and church walls with holy oil, the interring of the 10 holy relics in the reliquary beneath the altar, the first joint homily delivered by Bishop Vann and Father Smith, and finally the first celebration of the first Eucharist in the cathedral.

A Mass of thanksgiving was celebrated in Christ Cathedral the evening of July 18, again attended by a huge crowd. More than 2,000 were present for the Mass, which featured featured a homily by Orange Auxiliary Bishop Thanh Thai Nguyen.