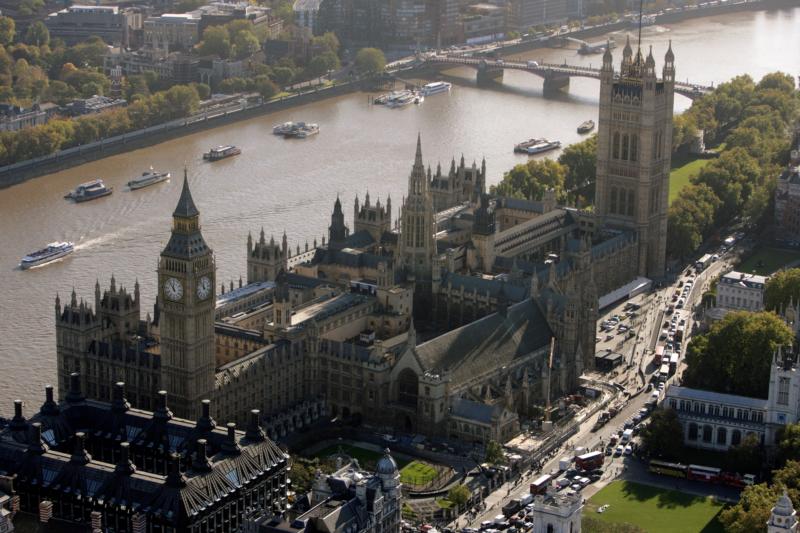 This is an aerial view of The Houses of Parliament in London. After a vote in the House of Lords, abortion and same-sex marriage will be made legal in Northern Ireland unless self-government in the province is restored within three months. (CNS photo/Kieran Doherty, Reuters)

In a direct appeal to Theresa May, the outgoing U.K. prime minister, the four Catholic bishops of Northern Ireland accused the government based in London of behaving recklessly after the Northern Ireland (Executive Formation) Bill was amended to extend abortion and gay marriage to the province before it was rushed through the Houses of Parliament.

In a July 17 statement, they said that “with the thousands of others” they wished to express their alarm at the “unprecedented way” in which the U.K. Parliament had ignored the wishes of the Northern Irish people.

“We appeal to the prime minister and Westminster government to move to overturn this hijacking of the … bill for purposes for which it was never intended and to uphold the right of citizens in Northern Ireland, under the Good Friday Agreement, to decide these matters for themselves,” they said.

“The equal right to life, and love, of a mother and her unborn child is so fundamental to the common good of every society that citizens deserve the fullest participation in the democratic debate about the legislation which governs it,” the bishops said. “This also applies to decisions regarding the nature of marriage.”

The statement was signed by Archbishop Eamon Martin of Armagh, Northern Ireland; and Bishops Noel Treanor of Down and Connor (Belfast), Donal McKeown of Derry and Lawrence Duffy of Clogher. It was posted on the website of the Irish Catholic Bishops’ Conference.

The bishops’ statement was read out during a July 17 debate on the bill in the House of Lords in London, but members voted nevertheless 182-37 in favor of permitting abortions for Northern Irish women up to 28 weeks of pregnancy.

Their vote came just two weeks after the House of Commons voted overwhelmingly in favor to amend the Bill to permit both abortion and same-sex marriage in the province. The House passed the Lords’ amendments July 18.

Both changes are subject to the restoration of legislative powers that were devolved — passed down from the British Parliament in London — to the Northern Ireland assembly at Stormont in Belfast by Oct. 21.

Power-sharing at Stormont between Irish Nationalist and Loyalist factions, which originated from the Good Friday Agreement of 1998, collapsed in 2017, and there are few signs that it will be restored in the near future.

The changes to abortion law are controversial because all of the U.K. Members of Parliament who hold seats in Northern Ireland are opposed to abortion.

The Stormont assembly also rejected abortion when it had the opportunity to vote for its introduction in 2016.

Northern Ireland is the only part of the U.K. — and one of the few places within Europe — where doctors can be prosecuted for providing abortions.

In their statement, the Northern Irish bishops said the amended bill “recklessly undermines this fundamental right of citizens and the principle of devolution at the heart of the Good Friday Agreement.”

“We appeal to all citizens in Northern Ireland to give expression to their commitment to the care of every mother and unborn child by asking their political representatives to ensure the equal right to life is upheld in our devolved legislation,” they added.

Auxiliary Bishop John Sherrington of Westminster, the lead bishop on pro-life issues of the Bishops’ Conference of England and Wales, had earlier urged politicians to heed the wishes of the majority of the people of Northern Ireland, saying that “decision-making should take place as close to the people as possible.”

“In contrast, this proposal is an imposition enacted by a Parliament which is overwhelmingly not from Northern Ireland,” the bishop said. “Parliament acting in this way threatens further to undermine devolution in Northern Ireland.”

Clare McCarthy of Right to Life U.K., a lobby group, said: “The people of Northern Ireland have 13 weeks to stop the introduction of one of the world’s most extreme abortion regimes to the province.

“Many thousands of people in Northern Ireland are deeply angered and distressed by this action by the Westminster Parliament,” she said in a July 18 statement sent by email to CNS.

“The manner in which MPs from Westminster have attempted to impose abortion on a people that do not want it, and who they do not represent, is grossly disrespectful and unconstitutional,” she said.

A letter with about 19,000 signatures from people of Northern Ireland was sent to May after her government indicated that it was dropping its policy of neutrality on abortion in the province in favor of actively pursuing a change in the law.

The letter, drafted by Baroness (Nuala) O’Loan, a Northern Irish member of the House of Lords, urged May not to permit legal abortion until the people of Northern Ireland had been consulted and their elected representative assented to a change in the law.

But Lord (Ian) Duncan, speaking for the U.K. government during the Lords debate, said abortion would be introduced irrespective of any consultation.

He said he wished to confirm that the “substantive point” of any future consultation would focus on “how women will obtain access to abortion, but not whether they should be able to do so.”

“I want to be absolutely clear, consultation would not be on the question of whether this should be done but only how the recommendations can be implemented in Northern Ireland,” he said.