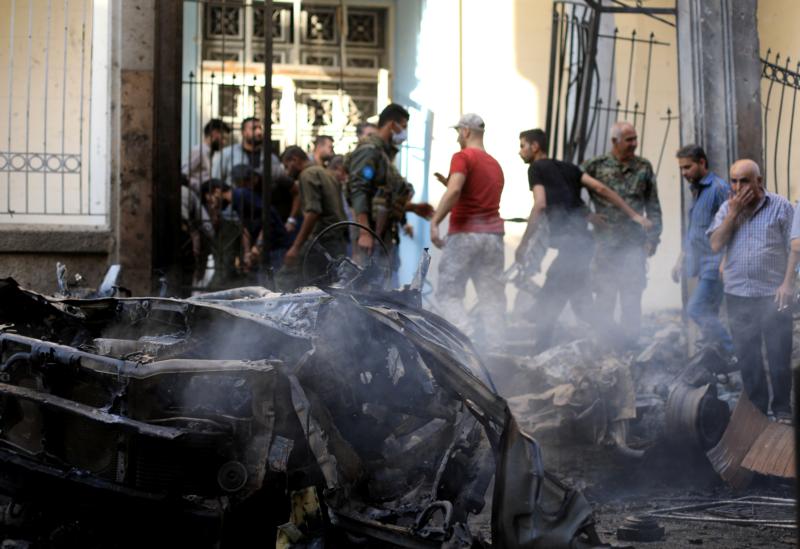 People gather at the site of a car bomb blast outside the Syriac Orthodox Church of the Blessed Virgin Mary in Qamishli, Syria, July 11, 2019. At least 11 people were injured in the blast during evening service. It was unclear who was responsible for the attack. (CNS photo/Rodi Said, Reuters)

AMMAN, Jordan (CNS) — Syriac Christians in northeastern Syria are calling on the United States to help defend them against a buildup of Turkish troops along the border, fearing they will be overrun and suffer the same fate as Afrin, where jihadist forces pushed out inhabitants last year.

The appeal by the U.S.-backed Christian Syriac Military Council, made available to Catholic News Service, warns of a possible Turkish attack on the eastern Euphrates River region in Syria. It said it fears the onslaught could affect thousands of Christians who live in Syria’s northeast, and it urges Washington to intervene.

The military council forms part of the U.S.-backed Syrian Democratic Forces responsible for driving out Islamic State militants from Syria, while defending Syriac Christians from IS fighters.

About 700,000 Syrian Christians fled to Europe due to Islamic State attacks during Syria’s eight-year war. Now, they fear a Turkish military incursion into the area east of the Euphrates River, which would again displace thousands of Christians who live in villages and towns along the Syrian-Turkish border.

“Turkey has been amassing troops at Ras al-Ayn, where there is no U.S. military presence,” Syriac Christian political leader Bassam Ishak told CNS by phone.

“But anywhere these troops come inside northeast Syria will be tragic, like in Afrin,” said Ishak, who heads the Syriac National Council. A graduate of The Catholic University of America in Washington, he is also a member of the political bureau of the Syrian Democratic Council.

“The safe zone Turkey has proposed is 32 kilometers (20 miles) deep. It’s in these areas where Kurds and Christians live. If Turkish forces come in, the expectation is that they will push out the inhabitants and turn the region over to extremist jihadist groups that they support, just like they did in Afrin a year ago,” he said.

Turkish troops and their rebel allies, including Islamic State and al-Qaida-linked fighters, swept into the northwest Syrian town of Afrin in March 2018, scattering its mainly Kurdish inhabitants, some of them Christian converts, and thousands of internally displaced Syrians from other parts of the country seeking shelter. Afrin had been one of the only areas virtually unaffected by the war. Turkey said it wanted to root out Kurdish militants.

Ishak and Syrian religious leaders like Chaldean Catholic Father Samir Kanoon of Qamishli said the region’s inhabitants view Turkey as an enemy of Christians due to past history. Syriacs and other Christians living in Turkey were caught up in the 1915 Ottoman Empire’s genocide of Armenian Christians, which saw 1.5 million Armenians killed.

“Because of the massacres, Christians were forced to escape from Turkey, and this is where they fled, to northeastern Syria and Aleppo. Turkey is viewed by many as the enemy of Christians,” Father Kanoon told CNS earlier.

Also, “Syriac Christians and many of the Kurds who live in northeast Syria are the grandchildren and descendants of those who fled oppression and massacres in Turkey and fled to this area, considered the last safe zone from the Turks. Turkey, in their minds, is the source of terrorism,” Ishak told CNS.

Ishak drew attention to continuing instability in the area. On July 11, three explosions took place in the northeast city of Hassakeh and, later that day, another explosion targeted the Syriac Orthodox Church of the Blessed Virgin Mary in Qamishli during the evening services, injuring about 11 people. It was unclear who was responsible for the attack.

“The church is located in an area within the control of the Syrian regime, but a truck was able to come and park outside the church,” Ishak said. “Someone detonated it from afar. It exploded just five minutes before the end of the Mass. If the blast happened 10 or 15 minutes later, when the people were leaving the church, it would have been a catastrophe.”

Homer spoke to CNS during the U.S. State Department Ministerial on Religious Freedom taking place in mid-July in Washington.

She questioned whether Turkey is making “a direct challenge and threat to the U.S. and its global coalition partner troops present in Tel Abyad” or an “imminent threat to follow through on its long-threatened invasion of the entire Democratic Self-Administration” present in the region.

Syrian Christians and Kurds making up the self-administration have permitted religious freedom choices to all the inhabitants.

Homer, too, believes that if Turkey does invade northeast Syria, “it will be a repeat of Afrin in any territory they seize, bringing targeted genocide, ethnic cleansing, rapes and trafficking of women.”