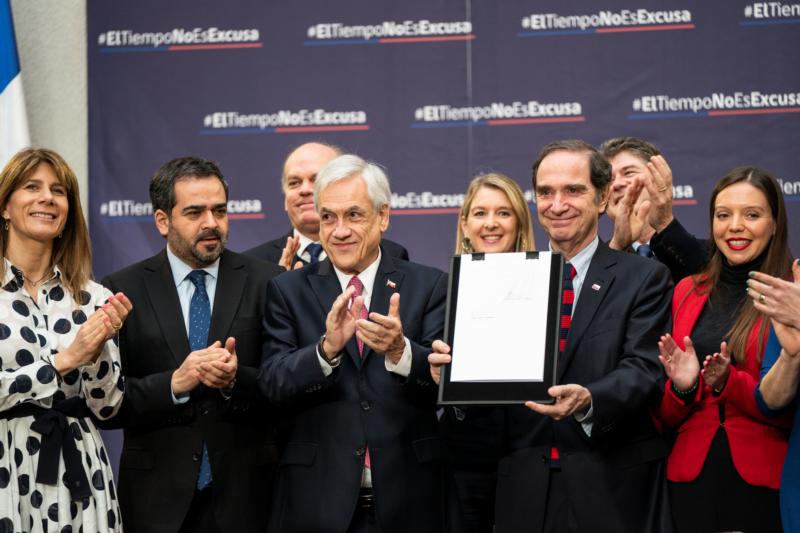 VATICAN CITY (CNS) — As the Catholic Church in Chile continues to deal with the fallout of clerical sexual abuse and its cover-up, the Chilean government passed a law removing the statute of limitations on sex abuse crimes against children.

The new law, which passed the Chilean Congress July 6, ensures that there will be no time limit in prosecuting cases “regarding the kidnapping or abduction of a minor, as well as the torture, unlawful coercion or cruel, inhuman or degrading treatment and all that occurs during an act of rape, carnal access to a minor, statutory rape or other sexual offenses.”

The law also allows victims to take civil action against people or institutions that aided in covering up sex abuse crimes.

“From now on, time will no longer be an accomplice of the abusers, nor an ally of impunity,” said Chilean President Sebastian Pinero as he signed the legislation July 11. “From now on, the responsibility of those who abuse our children will be irrevocable, just as the pain they caused our children is irrevocable.”

The legislation comes as investigators continue to look into cases involving the abuse of minors and vulnerable adults in the Catholic Church. Reuters news agency reported Chilean government officials said they were currently investigating more than 150 cases of sexual abuse or cover-up in the church.

Among those currently being investigated for possible cover-up are senior members of the clergy, including the last two archbishops of Santiago: Cardinals Francisco Javier Errazuriz Ossa and Ricardo Ezzati.

Although the new law is not retroactive, advocates say it is a major step forward and expressed hope that lawmakers can revise the law in the future for survivors who have been unable to seek justice due to prior limitations.

In an interview with Chilean radio station Diario UChile July 7, Jose Andres Murillo, one of several survivors of abuse by ex-priest Fernando Karadima, said making the law retroactive would be good for survivors and prevent abusers from committing further crimes.

Nevertheless, he said, “it is important to recognize that we’re creating legislation and actually catching up with what the International Convention on the Rights of the Child requires of us, and in that sense, I think it’s good news.”

PREVIOUS: Praising God for gift of creation leads to respect for it, pope says

NEXT: Not the usual suspects: Cardinal wants parish teams of risk-takers