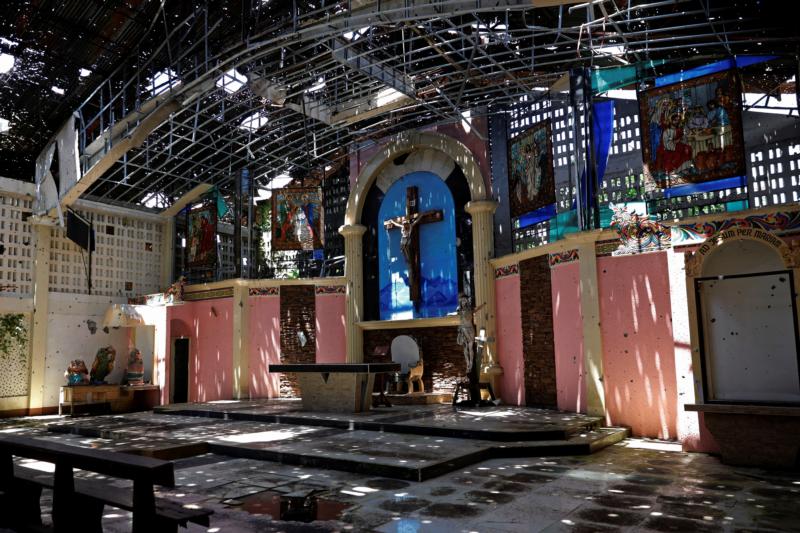 St. Mary’s Cathedral in Marawi, Philippines, is seen May 11, 2019. Forces affiliated with the Islamic State attacked the cathedral in 2017. Christians and Muslims prayed July 27, 2019, in the ruins of the cathedral and mosques in Marawi, which were devastated by a five-month siege. (CNS photo/Eloisa Lopez, Reuters)

MARAWI, Philippines (CNS) — Christians and Muslims prayed in the ruins of a church and a mosque in the southern Philippine city of Marawi, which was devastated by a five-month siege in 2017.

The prayers July 27 were led by Father Teresito Soganub, parish priest of the Marawi Catholic cathedral, who was held hostage by gunmen during the shooting war, ucanews.com reported.

“I hope that whatever happens, we can continue to journey together for peace in Mindanao,” Father Soganub said, referring to the rebuilding of places of worship in the city.

He said the Catholic cathedral, which was torched and desecrated by extremist gunmen, is a Christian symbol of “interreligious dialogue” with Muslims.

“It hurts me to see the church, where I served for years, in ruins,” a teary-eyed Father Soganub said.

The priest, together with Muslim religious leaders, also visited mosques that were damaged during the conflict.

The five-month siege left a trail of death and destruction and displaced thousands of people.

Earlier, Bishop Edwin de la Pena of Marawi prelature said the rebuilding of the Catholic cathedral will occur only when mosques are rebuilt in the predominantly Muslim city.

Plans call for the proposed new cathedral to be built over the ruins of the church, although the old altar will remain.

“The old and the new will be linked to give us hope for the future,” said Bishop de la Pena, who was elected earlier in July to head the Philippine bishops’ interreligious dialogue efforts.

The prelature and the Redemptorist Missionaries already have established a program to help rehabilitate the city and promote peace.

Bishop de la Pena said the most crucial task ahead is rebuilding the peace among Muslims and the small Christian community that they had been working to establish.

“Because I am an ‘internally displaced bishop,’ I have been tasked to be the voice of the displaced who have not returned to their homes,” he said. “We are trying to help them build their homes.”

The rehabilitation of “ground zero,” where the main fighting occurred and now described by the government as the “most affected area,” has yet to start. The government agency tasked with rebuilding the city continues clearing debris as munitions experts search for unexploded bombs.

The government said at least $1 billion is needed to rebuild Marawi and the surrounding areas.

NEXT: Cause for beatification of British missionary in Zimbabwe opens Sept. 5