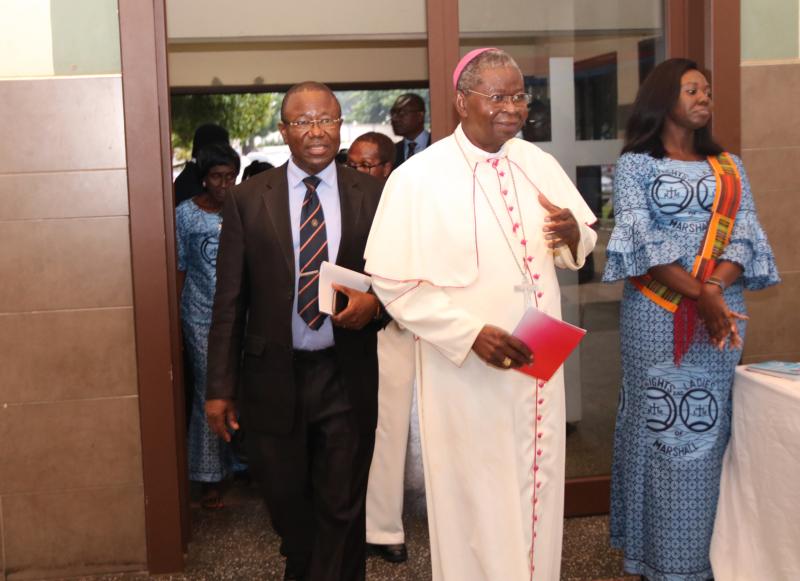 ACCRA, Ghana (CNS) — A Ghanaian archbishop called on Christians to be modest in the celebration of weddings, noting that pressure on young people to have expensive weddings is partly to blame for couples living together without marrying.

Noting that divorce causes great pain to families, Archbishop Philip Naameh of Tamale, president of the Ghana Bishops’ Conference, said “it is a fundamental duty of the church to reaffirm strongly the doctrine of the indissolubility of marriage.”

The archbishop gave the keynote address at the July 11-12 Marshall Mureau Murat memorial lectures with the theme, “Responding to ‘Amoris Laetitia’ with love in the family,” at Christ the King Parish. “Amoris Laetitia” (“The Joy of Love”) is Pope Francis’ 2016 apostolic exhortation after two synods of bishops on the family.

The memorial lectures, the 15th in the biennial series, were organized by the Knights and Ladies of Marshall, a Catholic society with about 3,000 members in Ghana, Togo, Benin, Liberia, Sierra Leone and the United Kingdom.

“Divorce or separation is a serious wound to the indissolubility of the marriage bond and the good of marriage in general,” Archbishop Naameh said.

Pressure from parents on their sons or daughters to marry at the parents’ convenience is worrisome, he added.

Noting that “this phenomenon has forced a number of people to marry against their will,” he urged the clergy and laity to take up the responsibility of educating people on matrimonial consent and impediments to marriage.

Christian marriage is a covenant between a man and a woman for their whole life for the good of the spouses and the procreation and education of children, Archbishop Naameh said.

“There is a lot of discussion and debate about the meaning and purpose of marriage and the sacrament of marriage as a sign of God’s love in the world,” he said.

Marriage is “a vocation because it is a response to a specific call to experience conjugal love as a sign — though imperfect — of the love between Christ and the church,” he said. “Consequently, the decision to marry and to have a family ought to be the fruit of a process of vocational discernment, which would lead to making a free choice in the matter.”

“Amoris Laetitia” sets out the responsibilities in building stronger families, Archbishop Naameh said, noting that it is in “families that we first learn our Christian faith and have our Christian identity.”

Despite “the many signs of crisis in the institution of marriage, the desire to marry and form a family remains vibrant, especially among young people,” he said.

Ghana’s latest census, in 2010, showed that 3.4 percent of Ghanaians 15 years and older were divorced. There are an estimated 29 million people in the West African country.

In 2016-2017, 73 percent of divorce cases handled by the Legal Aid Scheme of Greater Accra were filed by women.

NEXT: African bishop bargains deals for peace in government’s absence