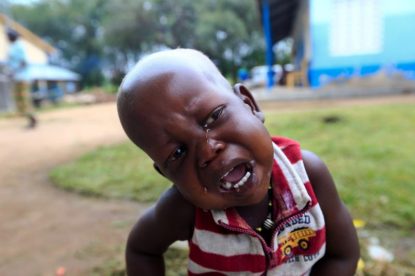 A refugee child from South Sudan cries while waiting for medication Nov. 11, 2017, at a health care center at a settlement camp in Moyo, northern Uganda. The Italian bishops’ conference will contribute $1.1 million in humanitarian aid over the next three years to assist South Sudan’s recovery from a violent civil war. (CNS photo/James Akena, Reuters)

NAIROBI, Kenya (CNS) — An infusion of $1.1 million will benefit humanitarian programs, the resettlement of refugees and internally displaced people, and peacebuilding efforts in violence-ravaged communities in South Sudan under a program initiated by the Italian bishops conference.

The program will be coordinated through Caritas South Sudan and the church’s umbrella humanitarian aid agency, Caritas Internationalis.

“On the eighth anniversary of the independence from Sudan, Caritas Italy joined the appeal of Pope Francis and the bishops of South Sudan for promoting peace in the country,” she said.

“The interventions will mainly concern food assistance and cash grants, shelter for vulnerable groups returned to the communities of origin, including hosts, distribution of seeds and agricultural tools, socio-economic support and rehabilitation, a program on reconciliation and peaceful coexistence,” she explained.

Funds also will be used to provide basic health care and emergency services to residents and internally displaced persons in the dioceses of Malakal, Rumbek and Yei in collaboration with Doctors with Africa CUAMM.

Sabbetti said the program aims to strength local ambulance service, procurement and distribution of drugs and medical supplies, restoration of health care facilities and development of an alert system for health and nutritional emergencies.