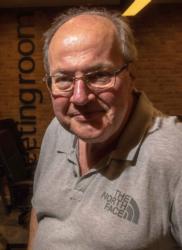 BANGKOK (CNS) — A Jesuit priest has asked Canada to rescue a Pakistani Christian refugee after a viral video calling for his death swept through Bangkok’s refugee community.

The appeal was made to Canada’s ambassador to Thailand, Donica Pottie, after Australia rejected an emergency asylum appeal from Faraz Pervaiz, a prominent defender of Christian rights. It comes two months after Canada gave asylum to Asia Bibi, a Pakistani Christian woman forced into hiding from Muslim extremists following false accusations of blasphemy.

The Canadian Embassy in Bangkok told Australian Jesuit Father Michael Kelly his request has been forwarded to Immigration, Refugees and Citizenship Canada. The Toronto archdiocesan Office for Refugees said it would sponsor Pervaiz and his family if they are resettled in Canada.

Pervaiz is a Christian who fled from Pakistan to Bangkok after being accused of blasphemy under laws that can result in a death sentence. He has several fatwas — religious decrees calling for his death — against him.

His location in Bangkok was revealed in mid-July in a video that went viral on social media. Following death threats by phone and text, he moved his family to a secret location outside of the city.

The video posted to Facebook, YouTube and several WhatsApp groups called for jihadi fighters to travel to Bangkok and kill Pervaiz. Several mullahs attached “fatwas” to the video to endorse killing Pervaiz.

“She’s saying (in the video) this is the responsibility of every Muslim in this world to find me, and to kill me,” Pervaiz told The Catholic Register, based in Toronto. “Since this (video) proclamation, the danger is that the jihadis are coming, day by day. Once they come to know exactly where I am, it takes one hour.”

“The would-be assassins continue to ring and assure Faraz that they’ll find him and kill him and his family,” Father Kelly said in an email. “I’d take them at their word.”

A longtime Bangkok resident and advocate for refugee rights, Kelly is assisting the Toronto archdiocesan Office for Refugees to resettle up to 63 Pakistani Christian families through Canada’s private sponsorship program. The number of refugees headed to Canada will depend on how many dioceses and parishes agree to make the financial and volunteer commitment to resettle them, but that process takes an average of two years. Kelly is seeking immediate action to rescue Pervaiz.

He appealed to the Australian government in a July 18 email; after an initially positive response, the request was denied July 20 without an explanation.

Pervaiz and his family are hiding in a one-room apartment, staying indoors 24 hours a day.

For more than a year, Pervaiz has had a price on his head of 10 million Pakistani rupees (about $82,000) issued by Pakistan’s populist, conservative political party Tehreek-e-Labbaik — the same party that urged Muslims to kill Bibi after she was acquitted of blasphemy by Pakistan’s Supreme Court. Following several months in hiding, Bibi was granted asylum and in May was resettled at a secret location in Canada.

Pervaiz, who fled Pakistan in 2014, and his family had been relatively safe in Bangkok because Pakistani extremists thought he was in the Netherlands. Tehreek-e-Labbaik even organized a rally in front of the Dutch Embassy in Islamabad last year, calling on the Netherlands government to return Pervaiz to Pakistan.

But he was discovered to be living in Bangkok and, after his address was revealed in the video, Pervaiz was in immediate fear for his family and his life.

The video was made by Saira Ismail, a Pakistani Muslim refugee well known among Bangkok’s 1,500 Christian refugees. Several Pakistani Christians told The Catholic Register Ismail often socialized with the Christians in Bangkok, attending church dances and asking for food and rent aid. Pervaiz said Ismail had requested aid from the small Christian church his family attends, but the church had no funds to help her.

Pervaiz has been a target of Pakistan’s religious conservatives since he began speaking out in defense of Christians after a 2013 mob attack on a Christian neighborhood in Lahore, the capital of Pakistan’s Punjab province. He led protests demanding action from the police and ran a blog in which he challenged both the politics and theology of Islam, presented his own interpretations of the Quran and criticized the Prophet. His father was a political leader in the Christian community and was nominated to sit in Parliament.

“We are not criminals. Our only crime is that we speak against their brutality,” Pervaiz said. “I don’t have words to explain to you their barbarism toward us. How Christians are marginalized every day. No one raised this issue.”

In 2017, an anti-terrorism court in Pakistan acquitted 106 Muslims accused of burning Christian houses in the 2013 mob attack.

Swan is associated editor of The Catholic Register, Toronto.

NEXT: ‘Positio’ for Father Flanagan’s cause presented to Vatican congregation