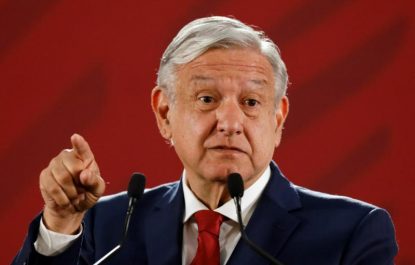 The promotion of morals and values should start with families, they said.

“Government concern with strengthening values in the family and ethics in the field of labor are, without doubt, positive. But the main task of all elected leaders is the establishment of an authentic and stable rule of law,” read an editorial published in the Archdiocese of Mexico City publication Desde la Fe.

“Fomenting values and the promotion of ethics must be recognized and encouraged as the main task of parents,” wrote Father Mario Angel Flores, rector of the Pontifical University of Mexico.

“It is not the task (of the Catholic Church) to distribute a booklet, (but to) intensify its commitment to spread the Gospel, the maximum expression of humanity, values and moral demands,” wrote Father Mario Angel Flores, rector of the Pontifical University of Mexico, in Desde la Fe.

Mexico suffered its most murderous year in memory in 2018, and revelations of corruption continue to scandalize.

President Andres Manuel Lopez Obrador swept into office in 2018 after campaigning against corruption, promising to calm the country and pledging to promote morals and values, including the enactment of a “moral constitution.”

Lopez Obrador speaks often of morals and values. He calls himself “a follower of Jesus Christ” and makes religious references. He refers to one of his programs — pay cuts for public servants and slimming the government — as “Franciscan poverty.” Lopez Obrador cites Scripture, even tweeting the beatitudes, a further departure from Mexico’s political tradition of presidents keeping references to God and faith from their public discourses.

He also has revived a reedited version of the “Cartilla Moral,” a slim tome on citizenship and virtue, written in the 1940s by Alfonso Reyes and published and promoted by the governments of the day.

“We have to moralize the Mexico’s public life,” Lopez Obrador said in January. “This ‘Cartilla Moral’ is going to be distributed because we have to strengthen cultural, moral and spiritual values — not only achieving material well-being, rather well-being of the soul as well.”

While Catholic leaders decline to endorse or distribute the Cartilla Moral — though not objecting to its publication or much of its content — The National Fellowship of Christian Evangelical Churches has eagerly agreed to promote the booklet.

“Mexico, the 125 million Mexicans, we need a rebirth to make progress with justice and to promote a way of life based on the love of family, neighbors, nature, our homeland and humanity.”

Farela said his organization had met twice with Lopez Obrador — who self-describes as “left-wing,” but forged an electoral alliance in 2018 with a party founded by evangelicals — since the president took office in December 2018.

The president, he added, “asked us to help him distribute the ‘Cartilla Moral.'” The fellowship, Farela said, asked the president “to help us have radio and television concessions or permits, which Mexican law currently prohibits religious groups from obtaining.

“We’ve had good relationships with all the previous presidents … but they were protocol meetings,” Farela said. With the current president, “with the (fellowship) he doesn’t only have protocol meetings, rather work meetings, in which he invites us to participate in various national projects.”

The Mexican bishops’ conference has met once with Lopez Obrador since he took office. Auxiliary Bishop Alfonso Miranda of Monterrey, conference secretary-general, described relations with the new government as cordial and not much different that with the administration preceding it.

“We’re the ones knocking at the door, not them,” Bishop Miranda said.

Bishop Miranda said the lone meeting with the president focused on topics such as promoting pacification in the country, religious liberty and immigration issues. He added the “Cartilla Moral” did not arise as an issue, and no requests were made to distribute it, “but we do remain strongly in collaboration on the issue of peacebuilding.”

Bishop Miranda said the Catholic Church has not collaborated previously with the fellowship, but enjoys good relations with other Protestant churches.

Some analysts say the issue has been overblown by the media — parts of which are at odds with Lopez Obrador. Sociologist Rodolfo Soriano-Nunez, who studies the Catholic Church, says the fellowship represents 7 million people at most and was set to only distribute 10,000 copies of the “Cartilla Moral.”

The president’s focus on morals has also caused controversy, though it’s not unprecedented in Mexico. President Miguel de la Madrid called for moral renewal in the 1980s, though it was unsuccessful, as rampant corruption continued.