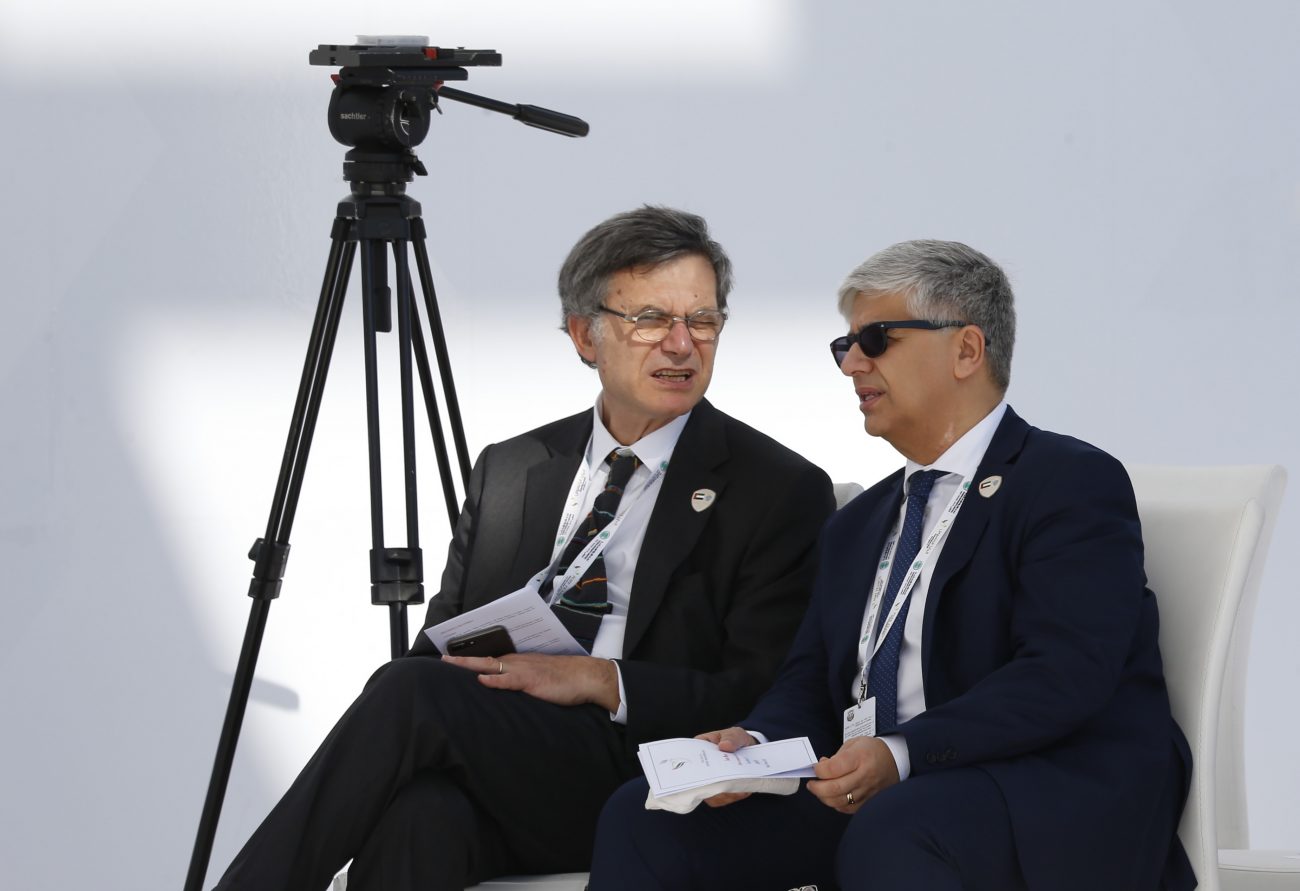 Paolo Ruffini, head of the Vatican Dicastery for Communication, and Andrea Tornielli, editorial director of the same dicastery, talk before Pope Francis’ celebration of Mass in Abu Dhabi, United Arab Emirates, Feb. 5, 2019. The Vatican has been working to streamline and coordinate its varied communications entities. (CNS photo/Paul Haring)

VATICAN CITY (CNS) — With the recent appointments of Matteo Bruni as the new director of the Holy See Press Office and Cristiane Murray as vice director, the Vatican is taking another step forward in its continuing efforts to reform its communication structures.

While the resignations of the former director and vice director of the Vatican press office in 2018 seemed to shake things up, the constant ups and downs of reform efforts were already foreseen by Pope Francis.

When the Dicastery of Communication held its plenary assembly May 4, 2017, the pope said reform was not “just whitewashing over things; reform is giving another form to things, organizing them in another way.”

However, he added, “it must be done intelligently, kindly, but also — allow me to use the word — with a bit of ‘violence,’ but good, soft violence, in order to reform things.”

The pope also emphasized that the evolution of communications in an increasingly digital age “demands both a rethinking of the Holy See’s information system and a commitment to reorganize it while appreciating what has been developed historically within the framework of communications of the Apostolic See.”

Efforts to streamline and coordinate the Vatican’s many news and communications outlets have been the cornerstone of the dicastery’s mission to reform in order to create “more synergy between the different outputs and different media,” said Andrea Tornielli, editorial director for the Dicastery for Communication.

Tornielli told Catholic News Service in an interview by phone July 22 that the dicastery’s aim is to put the different outlets under one umbrella and build “a unique dicastery.” But, he added, “the goal of the reform is to communicate better” and to use all of their people, resources and ideas more effectively without ending up with “duplicates.”

Appointed by the pope in December, Tornielli is charged with coordinating the editorial line of all the Vatican’s media outlets, to work on “strategic development” of new forms of communication and to integrate “traditional media with the digital world,” according to the dicastery’s statutes. He is the first to hold the post since it was created in 2016.

Tornielli told CNS that creating synergy among the Vatican’s various media outlets, which include radio, video production, the Vatican News website, L’Osservatore Romano newspaper, and the Vatican publishing house “doesn’t mean we are all the same” but that each one cooperates with one another rather than functioning as separate entities.

This cooperation, he added, also allows for the growth and expansion of existing structures to respond to evolving digital media, allowing for the Vatican outlets, such as the radio, to reach a broader audience.

While the future of what was once known as Vatican Radio was put into doubt during the reform’s early years, Tornielli told CNS that the fact that it didn’t shut down “means that it is a reform that is discussed and studied with people who are on the job.”

“Radio is not the past, radio is the future as you know because, for example, podcasts have been successful around the world,” Tornielli said. The dicastery plans to continue to improve on its podcasts “with good interviews and good analysis,” he added.

The Vatican’s communications strategy for radio also includes broadcasting to remote areas, including the Amazonia region, where many of its residents do not have access to smartphones but “are able to listen to radio transmissions.”

Nevertheless, in a digital age where the spread of false information and “fake news” often fuels divisions along the political spectrum, the ultimate goal of the Vatican’s communications strategy is to present “the real words of the pope” in their entirety.

It is important “to present the whole message of the pope and not the part that is more convenient for your political party, if you are a part of politics, or for your movement,” Tornielli said.

In a time of media over-saturation, he added, the Vatican’s communications office is emphasizing the need for professional journalists to fight against “the phenomenon of fake news.”

This is especially important for the upcoming Synod of Bishops on the Amazon, which has seen its fair share of debates, criticisms or concerns about doctrinal matters and theological questions.

“It’s important not to reduce the synod into one or two issues, one or two things, one or two agendas from either the liberals or the conservatives,” but rather present it in all its complexity, Tornielli told CNS.

While some may dismiss the October gathering as a local synod that “is focused only in a region,” Tornielli said that the themes of coexistence between ethnic and religious groups, the consequences of current economic and financial systems and the church’s presence in remote areas are relevant to the Catholic Church around the world.

“The goal at this moment is not to (start) a kind of war between different parts on issues that are so complex,” he said. “I think the discussion will be interesting because we are (not only) speaking about the Amazon, we are also speaking about our future.”