Migrants are people, not just a social issue, pope says at Mass 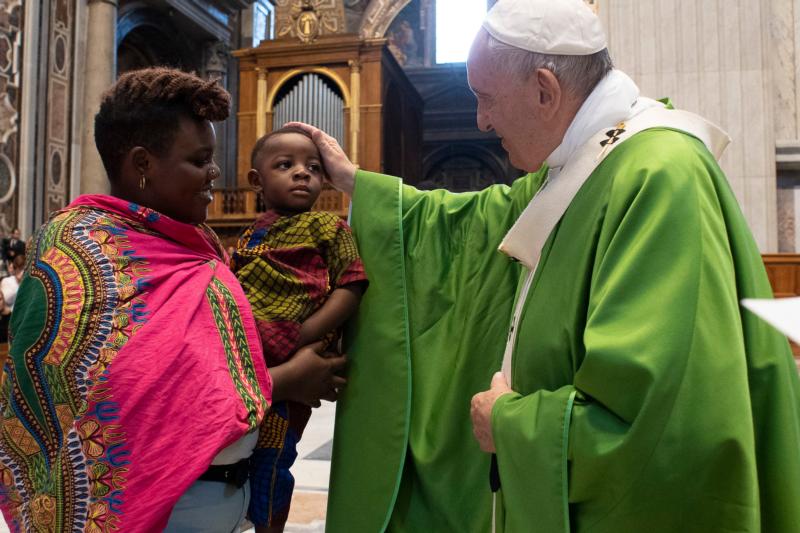 Pope Francis greets a woman and child during a July 8, 2019, Mass in St. Peter’s Basilica at the Vatican commemorating the sixth anniversary of his visit to the southern Mediterranean island of Lampedusa. (CNS Photo/Vatican Media)

VATICAN CITY (CNS) — Christians are called to follow the spirit of the beatitudes by comforting the poor and the oppressed, especially migrants and refugees who are rejected, exploited and left to die, Pope Francis said.

The least ones, “who have been thrown away, marginalized, oppressed, discriminated against, abused, exploited, abandoned, poor and suffering” cry out to God, “asking to be freed from the evils that afflict them,” the pope said in his homily July 8 during a Mass commemorating the sixth anniversary of his visit to the southern Mediterranean island of Lampedusa.

“They are persons; these are not mere social or migrant issues. This is not just about migrants, in the twofold sense that migrants are, first of all, human persons and that they are the symbol of all those rejected by today’s globalized society,” he said.

According to the Vatican, an estimated 250 migrants, refugees and rescue volunteers attended the Mass, which was celebrated at the Altar of the Chair in St. Peter’s Basilica. Pope Francis greeted each person present after the Mass ended.

In his homily, the pope reflected on the first reading from the book of Genesis in which Jacob dreamed of a stairway leading to heaven “and God’s messengers were going up and down on it.”

Unlike the Tower of Babel, which was humankind’s attempt to reach heaven and become gods, the ladder in Jacob’s dream was the means by which the Lord comes down to humankind and “reveals himself; it is God who saves,” the pope explained.

“The Lord is a refuge for the faithful, who call on him in times of tribulation,” he said. “For it is indeed at such moments that our prayer is made purer, when we realize that the security the world offers has little worth and only God remains. God alone opens up heaven for those who live on earth. Only God saves.”

The Gospel reading from St. Matthew, which recalled Jesus curing a sick woman and raising a girl from the dead, also reveals “the need for a preferential option for the least, those who must be given the front row in the exercise of charity.”

That same care, he added, must extend to the vulnerable who flee suffering and violence only to encounter indifference and death.

Pope Francis said the image of Jacob’s ladder represents the connection between heaven and earth that is “guaranteed and accessible to all.” However, to climb those steps requires “commitment, effort and grace.”

“I like to think that we could be those angels, ascending and descending, taking under our wings the little ones, the lame, the sick, those excluded,” the pope said. “The least ones, who would otherwise stay behind and would experience only grinding poverty on earth, without glimpsing in this life anything of heaven’s brightness.”

The pope’s call for compassion toward migrants and refugees less than a week after a migrant detention camp in Tripoli, Libya, was bombed in an air raid. The Libyan government blamed the July 3 attack on the Libyan National Army, led by renegade military Gen. Khalifa Haftar.

Pope Francis denounced the attack and led pilgrims in prayer for the victims July 7 during his Angelus address.

“The international community can no longer tolerate such grave events,” he said. “I pray for the victims; may the God of peace receive the deceased and sustain the wounded.”