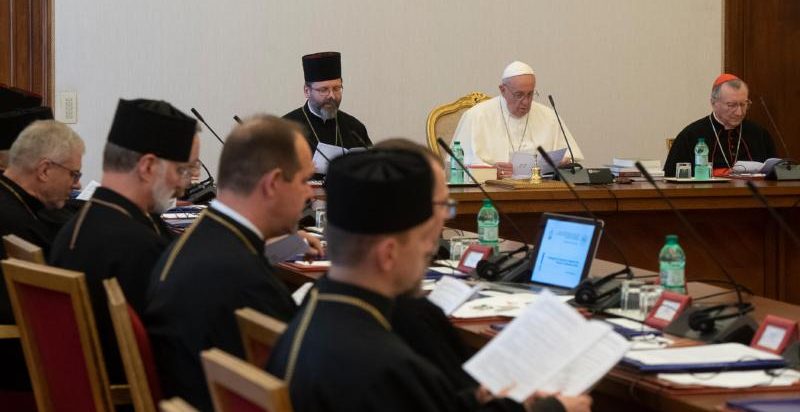 Pope Francis sits between Major Archbishop Sviatoslav Shevchuk of Kiev-Halych, head of the Ukrainian Catholic Church, and Cardinal Pietro Parolin, Vatican secretary of state, July 5, 2019, the opening of a two-day meeting in the Apostolic Palace. The meeting, which included members of the Ukrainian Catholic Church’s permanent synod, its metropolitan archbishops and top officials of the Roman Curia, focused on the ministry of the church, particularly given the ongoing war in Eastern Ukraine. (CNS photo/Vatican Media)

VATICAN CITY (CNS) — Being a pastor in a country at war means being with people, leading them closer to Jesus and celebrating the liturgy in a way them helps them experience a bit of heaven on earth, Pope Francis told bishops from Ukraine.

“The church must be the place where one draws hope, where one finds the door always open, where one receives consolation and encouragement,” the pope told the head of the Ukrainian Catholic Church, members of the Eastern Catholic church’s permanent synod and its metropolitan archbishops.

Pope Francis invited the bishops to the Vatican July 5-6 to discuss the mission of their church in war-torn Ukraine and in communities throughout the world. Top officials from the Vatican Secretariat of State, the Congregation for Eastern Churches, the Dicastery for Promoting Integral Human Development, the Congregation for the Doctrine of the Faith and the Pontifical Council for Promoting Christian Unity also participated.

“Ukraine has been living in a difficult and delicate situation,” the pope said. It has been “wounded for the past five years by a conflict many call ‘hybrid,’ including as it does actions of war where those responsible hide; a conflict where the weakest and smallest pay the highest price; a conflict aggravated by propagandistic falsifications and manipulations of various kinds, including the attempt to involve religion.”

Opening the meeting the day after hosting Russian President Vladimir Putin, Pope Francis did not mention by name Russia and its direct involvement in the fighting in Eastern Ukraine. He also did not specify the claims of some influential members of the Russian Orthodox Church who have tried to paint the conflict as part of an attempt to marginalize the Russian Orthodox in Ukraine.

“Our encounter was announced first,” Archbishop Shevchuk said. And coming on the heels of the Putin meeting “gave us the opportunity to have the last word,” he added with a smile.

More seriously, he said, the Ukrainian bishops could “detoxify the propaganda in order to be spokesmen for the concrete, humanitarian situation in Ukraine.”

In his opening talk, the pope focused on the church’s ministry and the ways it must bring hope to a nation wearied by war and consolation to those who lost loved ones or have been forced to flee Eastern Ukraine, their homes and jobs.

“The principle role of the church in the face of the complex situations provoked by conflict is that of offering a witness of Christian hope,” the pope said.

The church and its pastors, he said, do that first of all by helping people draw closer to Jesus and renew their faith through the celebration of the liturgy, honoring the Ukrainian Catholic martyrs and being helped to notice “those numerous saints next door who, with simplicity, responded to evil with good.”

“In effect,” the pope said, “the encounter with Jesus, the spiritual life, the prayer that resonates in the beauty of your liturgy transmit that beautiful strength of peace that heals wounds and instills courage, but not aggressivity.”

To lead people to that experience, he said, pastors must be close to their people, knowing and taking seriously their trials and worries.

The church also must offer concrete assistance to those in need, he said, and bring their needs to the attention of others so that serious situations of suffering do not fade into oblivion.

Church leaders must learn to listen to their faithful and to anyone who comes knocking at the door, he said. “Because heaven on earth is what every person who draws close to the church is looking for, nothing else.”

Acknowledging the Eastern Catholic churches’ tradition of actual governance by a synod of bishops that meets regularly, the pope asked the Ukrainian Catholics to develop that “synodality” and make sure that it marks relations among all the bishops and between the bishops and all their faithful.

Listening is key, Pope Francis said. “One who listens can then speak well. One who is not used to listening does not speak, but barks.”

Archbishop Shevchuk said the two days of listening and reflection were aimed at helping the Ukrainian church identify ways “to develop, grow and blossom” both in Ukraine and abroad.

Some Orthodox theologians have maintained that the Ukrainian Catholic Church and other Eastern Catholic churches should fade from existence as part of a larger process of promoting Christian unity. They have said the Eastern Catholics entered into full communion with Rome in a process that ended up splintering existing Orthodox churches, and that their continued presence is a reminder of that division.

But, Archbishop Shevchuk said, Pope Francis made it clear that he wants a continued and even greater vibrancy for the Ukrainian Catholic Church.

“We do not want to be an obstacle, but a catalyst for ecumenism,” he said. “We want to be the first to proclaim the vital need for Christian unity and witness to it” by reaching out to others and cooperating with them in serving the people.

Asked if the meeting might mark a step forward in the official recognition of the church as a patriarchate — rather than a major archbishopric, a distinction more of prestige than power — Archbishop Shevchuk said at the meeting the bishops described their church as “de facto patriarchal,” but acknowledged that just 30 years after emerging from a clandestine existence, some of their structures may need further development to be termed patriarchal.

In addition, he said, the declaration of a Ukrainian Catholic patriarchate could have a negative impact on relations with some of the Orthodox churches, which are “uneasy” with the “dynamic development” of the Eastern-rite church in Ukraine.

The archbishop said one of the first things the Ukrainians did at the meeting was invite Pope Francis to visit, certain that his presence would contribute to peace.

The archbishop brought it up again at dinner July 6 and the pope responded, “I’ll think about it.”

PREVIOUS: Migrants are people, not just a social issue, pope says at Mass

NEXT: Pope names women as full members of congregation for religious