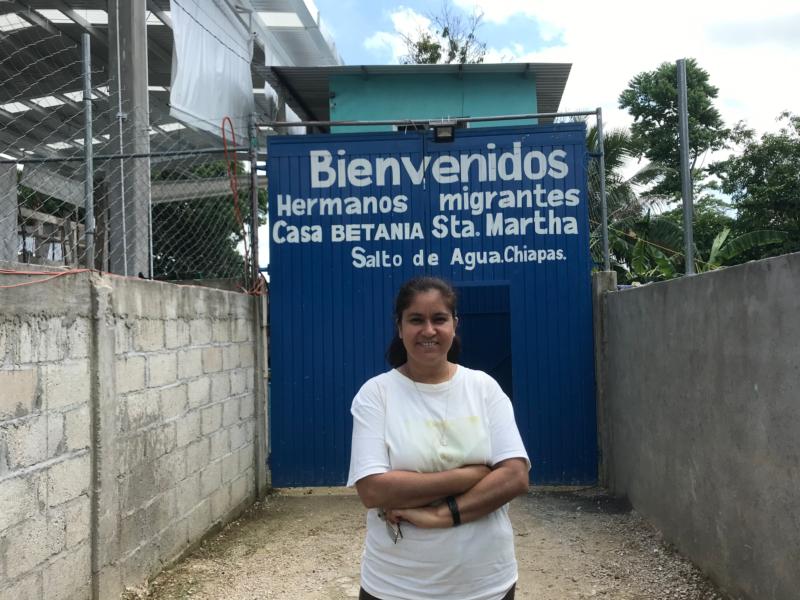 They seek basic assistance in the form of hot showers, proper meals and places to sleep. Some, however, seek advice. They often query Sister Diana Munoz Alba, a human rights lawyer and one of four Franciscan Missionaries of Mary at the shelter, about obtaining a document for traveling through Mexico.

Sister Munoz said she does her best to inform migrants of the risks and realities on the road. She also tries to disabuse shelter dwellers of any erroneous ideas — such as the existence of immigration documents for them — and does not sugarcoat her answers.

“It’s tough, but I think it’s important to be very honest with people and tell them how hard it can really be. There are many people who are very naive because they’re coming here for the first time and believe everything they’re told,” Sister Munoz said at the shelter.

“It’s important work to make them a little more aware of all the risks they can encounter on the road. And normally I tell them the only thing that’s safest for them — especially if they’re women and women with children — are the migrant shelters.”

Migrants from Central America and even further afield have been passing through southern Mexico in seldom seen numbers, with many hoping to reach the U.S. border or at least the central and northern parts of Mexico, where economic opportunities are more abundant.

But Mexico has increased its immigration enforcement in recent months, and the U.S. has implemented policies such as returning asylum-seekers to Mexico as their cases are processed, but staff at the Salto de Agua shelter — founded and still sponsored by the Society of the Divine Word — say they’ve seen a 40 percent increase in migrant registrations in recent months.

Migrants traveling through Mexican are often inadvertent players in a larger political squabble, though most think little, if at all, about geopolitics, Sister Munoz said.

They do, however, think about unhappy situations at home, which forced them to flee. Such factors include poverty, crime and climate change. There are also the of the pull factors of possible prosperity to be found in the Mexico and the United States.

Many migrants also cling to the idea of Mexico providing them a helping hand, Sister Munoz said, even though the country stopped issuing humanitarian visas in early 2019.

“Perhaps they never got informed about the risks of passing through Mexico and many still come with the American dream,” Sister Munoz said. “They don’t realize the American dream now remains just that: a dream.”

Shelters like Sister Munoz’s often provide a refuge for the neediest of migrants, especially those unable to scrape together the funds to hire a coyote, or smuggler. Staff in Salto del Agua said they are increasingly attending to individuals tricked by coyotes or deceived by locals, who charge migrants inflated prices for everything from bottles of water to flop hotel rooms to rides into the next town.

“The municipality of Salto de Agua lives off of migrants,” the nun said.

“Public transport drivers, if they charge 60 pesos (about $3), they’ll charge the migrants up to 1,000 pesos (roughly $50) … and they’ll leave them in the middle of the road (or) they’ll trick them and say there’s an immigration checkpoint ahead,” Sister Munoz said.

Sister Munoz and Divine Word Father Jeffrey Yague Udasco visited the local police chief in early May to express concern over the proliferation of safe houses in the neighborhood surrounding the shelter. The chief became uncomfortable and later angry, Sister Munoz said.

A dead body was dumped along the railway lines near the shelter the next day — something Sister Munoz called an attempt at intimidation.

Parishioners from San Fernando de Guadalupe pitch in to help feed the migrants passing through, and the Divine Word priests speak of the migrants’ plight in their homilies. But attitudes toward migrants appear to be worsening, Sister Munoz said.

She travels to the farming towns surrounding Salto del Agua to speak of migrant issues, but confesses finding “a lot of rejection of the migrant shelter.” Some of the people who once helped out have changed their views on migration, she said.

On a recent night, migrants checked in to the shelter amid power outages, including a family of more than 20 members who left Honduras together. A coyote was spotted inside — his clean clothes were a giveaway, Father Yague said — and was asked to leave.

A mother traveling with two children, ages 4 and 5, was unable to prove parentage of the youngsters. It produced a tense moment as shelter staff told the woman they would have to contact the state human rights commission.

Father Yague said it is not unusual for people to travel with a child who is not their offspring, as migrants believe U.S. officials look more leniently on minors.

The “militarization” in southern Mexico has forced migrants to walk for days through mountainous terrain to avoid security checkpoints, Sister Munoz said. This exposes them to more risks from bandits and corrupt officials. Many of the migrants making it to Salto de Agua continue northward by taking risky rides the Bestia train.

“(Donald Trump) said Mexico was going to pay for the wall, and the Mexican government said, ‘No way,'” Sister Munoz said. “But they’re paying for it with all this militarization.”