Once imprisoned, Chinese woman now guides others to the Catholic faith 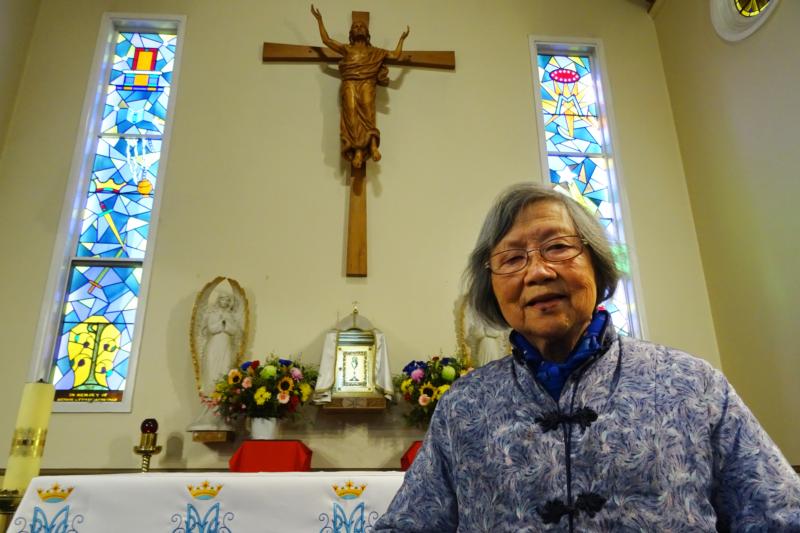 Teresa Liu poses June 15, 2019, at St. Michael Church in Hurstville in southern Sydney, Australia. Liu was imprisoned in China for 20 years because she was a member of Catholic lay organization, the Legion of Mary. She has helped convert hundreds of Chinese migrants to the Catholic faith in Australia. (CNS photo/Catherine Sheehan)

SYDNEY (CNS) — A woman who spent 20 years imprisoned in China for being a faithful Catholic has helped hundreds of Chinese migrants convert to the faith in Australia.

Teresa Liu, now 86 and living in Sydney, was imprisoned in Guangzhou from 1957 to 1977 by the Chinese communist government.

She was never given a trial and spent some of her sentence in solitary confinement — at one point for a period of seven months.

Denied access to the sacraments and the Bible throughout her incarceration, Liu kept her faith alive by praying secretly in her cell.

“I could say the rosary only after I lie down in bed, secretly,” she told Catholic News Service. “I felt very close to God at that time because in my heart I said, ‘Jesus, now I have nothing but you. Don’t let me leave you.'”

Liu’s crime was being a member of a Catholic lay organization, the Legion of Mary, which was considered an “anti-revolutionary” group by the Chinese leaders.

Her other crime was remaining faithful to the pope by refusing to join the state-run Chinese Patriotic Catholic Association.

Following her release, Liu immigrated to Australia in 1980 with her husband, John Bosco Liu, who had been imprisoned for 22 years.

Providing them one-on-one faith formation in their own language — Cantonese or Mandarin — she has guided hundreds into entering the Catholic Church, said Father Janusz Bieniek, pastor and a member of the Congregation of St. Michael the Archangel.

“She is very supportive of all initiatives in the parish, especially the work of evangelization with people from China who are thinking of becoming Christian,” Father Bieniek told CNS. “She gathers them, talks to them, personally keeps contact with them and encourages them.”

Liu has sponsored numerous people who have been baptized into the faith and she is often asked to be godmother to their children.

Recently she was invested as a dame in the Equestrian Order of St. Gregory the Great in recognition of her “outstanding commitment to faith” demonstrated “through her Christian outreach to and conversion of many people in the Archdiocese of Sydney.”

Investiture in the order is the highest honor the church bestows on laypeople and is given in recognition of extraordinary service to the church.

Father Bieniek described Liu, a daily Mass attendee, as a “person of prayer.”

“She is a very credible witness to the faith and at the same time very quiet and unassuming. People know about her past, her experiences and sufferings, but she doesn’t boast about this,” he said.

“She is very positive and never has any kind of talk about revenge or hatred. She has no anger so that makes a very big impression on people.”

Liu said she has forgiven her captors.

“Those people were just doing their duty, their job. They also are victims of the communist system,” she said.

She was only 25 when she was arrested. She was newly engaged to her future husband at the time.

Prior to their engagement, she had wanted to become a Carmelite nun but changed her mind when John Bosco Liu told her that he loved her.

Liu spent some of her sentence in the same prison as her husband, but the couple had only fleeting glimpses of each other during that time. Speaking or showing any signs of affection would have meant severe punishment for both.

As soon as she was free, she wrote to him expressing her love. They were married in 1979 after John Bosco Liu’s release.

Their marriage lasted just 10 years, however. John Bosco Liu died of a heart attack immediately after receiving holy Communion during Mass. Liu was by his side at the time.

“I’m very grateful to God that he died peacefully and after receiving holy Communion,” she said.

Liu also lost her eldest brother Paul to the communist regime. He died in prison after serving a 15-year sentence, leaving behind a wife and eight children.

Priests and nuns from Guangzhou also were imprisoned, including Archbishop Dominic Tang Yee-ming, who spent 22 years behind bars without a trial.

Liu said all people have the right to freely practice their faith, which she called “the natural law.”

She expressed gratitude that God had granted her a long life so she could tell her story as well as “the story of many, many people in China.”

“Pray for China. The situation in China now in some ways is worse than it was for us. … They want to destroy every religion,” she said.

“Thank God I still have the chance to speak about my experience today. In the beginning, at first, I said, ‘Thank God.’ And my last word also is, ‘Thank God very much.'”

NEXT: Pope makes surprise visit to nun recovering from surgery