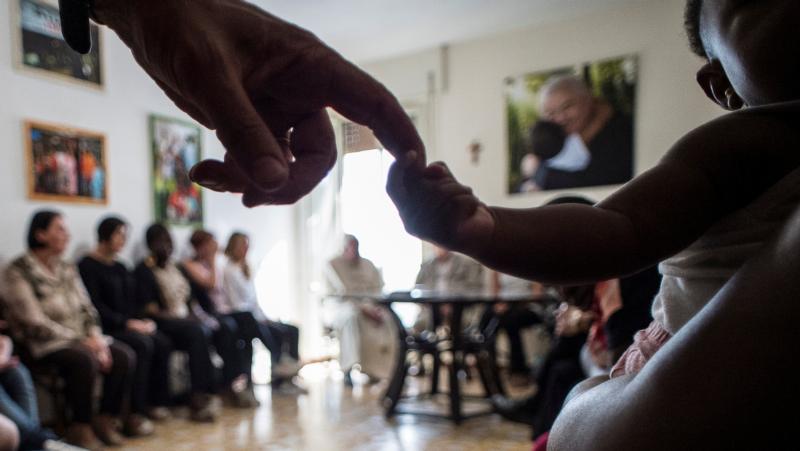 Pope Francis sits with women rescued from prostitution and their supporters at the Pope John XXIII Community in Rome Aug.12, 2016. The pope wrote about his visit to the community in the prologue of a new book, titled, “Crucified Women,” and said prostitution was “a disgusting vice that confuses making love with venting out one’s instincts by torturing a defenseless woman.” (CNS photo/L’Osservatore Romano via Reuters)

VATICAN CITY (CNS) — Prostitution is a horrendous crime that reduces vulnerable women to tortured slaves who are at the mercy of their clients, Pope Francis said.

All people of goodwill have a duty to help vulnerable women and other victims of human trafficking escape from forced sexual slavery, the pope wrote in a prologue of a new book on the suffering of women forced into prostitution.

“Any form of prostitution is a reduction to slavery, a criminal act, a disgusting vice that confuses making love with venting out one’s instincts by torturing a defenseless woman,” he said. “It is a sickness of humanity, a false way of thinking in society.”

The new book, titled “Crucified Women,” was released in Italian and written by Father Aldo Buonaiuto, a priest who works for the John XXIII Community, an international association that helps marginalized people.

L’Osservatore Romano, the Vatican newspaper, published the book’s prologue July 29 on the eve of the World Day Against Trafficking in Persons.

During the Jubilee Year of Mercy, the pope visited a house run by the John XXIII Community in northeast Rome that helped young women rebuild their lives after being rescued from prostitution.

The pope met with “20 women liberated from the slavery of the prostitution racket. Six of them come from Romania, four from Albania, seven from Nigeria and one each from Tunisia, Italy and Ukraine,” the Vatican said Aug. 12, 2016.

According to L’Osservatore Romano, Pope Francis had asked the women for forgiveness on behalf of all the men — especially Christians — who had used and abused them.

“Today, I ask you all for forgiveness. For all the Christians, for all the Catholics, who have abused you. And I also for forgiveness on my part, for not having sufficiently prayed for you and for this slavery,” the pope told the women during his visit.

In the book’s prologue, the pope recalled his visit to the community and said that while he spoke with the women, he “breathed in all the pain, the injustice and the effects of oppression.”

“After listening to the touching and very human stories of these poor women, some of them carrying a child in their arms, I felt a strong desire, almost the need, to ask them for forgiveness for the real tortures they had to endure because of their clients, many of whom call themselves Christians,” the pope wrote.

Praising the work of the John XXIII Community, Pope Francis said he hoped the book would bring greater awareness to the plight of women forced into prostitution. By listening to the stories of trafficking victims, people can “understand that if such a high demand from clients isn’t stopped, we will not be able to effectively combat the exploitation and humiliation of innocent lives.”

No one, especially Christians, can “look the other way or wash their hands of the innocent blood shed upon the streets of the world,” he added.

“Corruption is a disease that doesn’t stop on its own,” Pope Francis said. “We need to raise awareness on an individual and a collective level — even as a church — to truly help these unfortunate sisters of ours and prevent the iniquity of the world from falling upon the most fragile and defenseless creatures.”

PREVIOUS: African bishops want to be sign of hope in face of people’s ‘anguish’

NEXT: Once imprisoned, Chinese woman now guides others to the Catholic faith